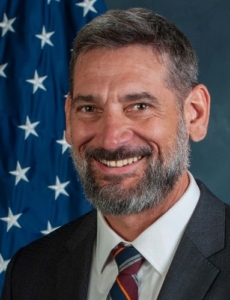 Andrew Von Ah is currently a Director in the Physical Infrastructure team at GAO, responsible for portfolios of work on telecommunications and the internet, and public transit investment. Andrew leads multi-disciplinary teams in conducting audits and program evaluations in these areas, and testifies before congressional committees on the findings of GAO’s work.

Andrew joined GAO in 2000 and prior to becoming a Director, he led a broad range of engagements across several portfolios of work; notably a body of work on the Next Generation Air Transportation System, several engagements on multimodal policy options, governance reviews of the Smithsonian and the Federal Communications Commission, and engagements and testimonies touching on high-speed rail, maritime transportation, and aviation workforce issues.

Andrew graduated from UC Irvine with a degree in cultural anthropology, and holds a Master’s of Public Policy from UCLA. He also completed American University’s Key Executive Leadership program.

2006 MPP Alumna of the Year
Scroll to top