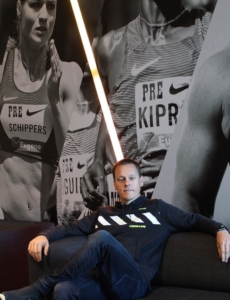 Chuck Gatchell has worked at Nike, Inc. for 16 years and currently leads Nike’s efforts related to the Tokyo Summer Olympics and other global initiatives, where he is a Global Vice President / General Manager.

Chuck holds an undergraduate degree in Management from the University of California, Berkeley (Haas School of Business), where he also earned a minor in Creative Writing and ran cross-country and track (steeplechase).  He also holds master’s degrees in Accounting from the University of Virginia and Public Policy from UCLA’s Luskin School of Public Affairs.

A first-generation college graduate, Chuck co-founded Advance!, a non-profit organization dedicated to increasing college awareness, information, and access for underserved populations, in his hometown of La Habra, California in 2002.  He also coaches various youth sports, advises start-ups in the social and environmental impact space, and serves on advisory boards for the UCLA School of Public Affairs and the Haas School of Business (Berkeley).

Chuck spends time away from work with his wife, Melissa, who holds a PhD in Public Health from UCLA, and their four children (Nate, Dylan, Zach, and Charlize).  Chuck is based in Portland, Oregon, USA.

2015 MPP Alumna of the Year
Scroll to top