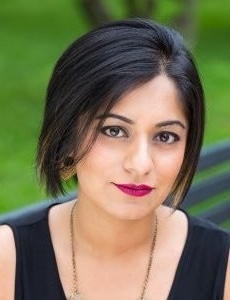 Tanzila “Taz” Ahmed is an activist, storyteller, and politico based in Los Angeles, California.

An electoral organizer by trade, she’s mobilized thousands of Asian American & Pacific Islanders to the polls in over seventeen different languages in the past fifteen years. In 2004, she founded South Asian American Voting Youth (SAAVY), a national organization that organizes South Asian American youth to have a political voice and get involved in the electoral process. She has since worked at Asian Americans Advancing Justice-Los Angeles and Orange County Asian and Pacific Islander Community Alliance employing in-language culturally competent tools to mobilize hundreds of thousands of AAPI voters to the polls. She currently is a Campaign Strategist at the Asian American new media organizing group 18MillionRising.

With a Master in Public Policy degree with concentration on racial justice policy from UCLA’s School of Public Affairs, she was part of a student led initiative to bring Critical Race Theory into public policy. While at UCLA, her thesis project entitled Barriers to Student Voting examines the various barriers that students in California face when exercising civic engagement. An experienced campaign trainer, she has led workshops with EnviroCitizen, APIA Vote, the League of Young Voters, and Campus Camp Wellstone.

In 2016, Taz was honored as a White House Champion of Change for Asian American and Pacific Islander Art and Storytelling. She is cohost of The #GoodMuslimBadMuslim Podcast that has been featured in Oprah Magazine, Wired, andBuzzfeed as well as live shows recorded at South by Southwest and the White House. An avid essayist, she had a monthly column called Radical Love, was a blogger for Sepia Mutiny, has written for Truthout, The Aerogram, The Nation, Left Turn Magazine, and more. She is published in the anthology Good Girls Marry Doctors (2016) and poetry collection Coiled Serpent (2016) and was published in the anthologyLove, Inshallah (2012). Her third poetry chapbook Emdash and Ellipses was published in early 2016. Taz curates Desi music atMishthi Music where she co-producedBeats for Bangladesh and she annually makes #MuslimVDay Cards. Her artwork was featured in the shows Sharia Revoiced (2015), in Smithsonian Asian Pacific American Center’s “H-1B” (2015), and Rebel Legacy: Activist Art from South Asian California (2014).

2016 MPP Alumnus of the Year
Scroll to top