Q&A With the Filmmakers of ‘Summer of Soul’

Q&A With the Filmmakers of ‘Summer of Soul’ 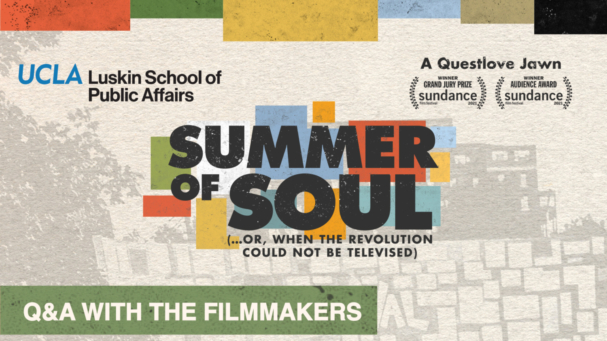 UCLA Luskin School of Public Affairs invites you to a moderated discussion with Producer, Joseph Patel, and Art Director Consultant, Frank William Miller Jr. as they discuss the making of the multi-award-winning documentary film, Summer of Soul (…Or, When the Revolution Could Not Be Televised).

The first 200 registrants will be provided with links to view the film for a week prior to the Q&A. Each unique registrant will be emailed directly by Luskin Events with an access code. Those with a subscription to Hulu should also be able to access the film in advance without use of an access code.

In his acclaimed debut as a filmmaker, Ahmir “Questlove” Thompson presents a powerful and transporting documentary—part music film, part historical record created around an epic event that celebrated Black history, culture and fashion. Over the course of six weeks in the summer of 1969, just one hundred miles south of Woodstock, The Harlem Cultural Festival was filmed in Mount Morris Park (now Marcus Garvey Park). The footage was never seen and largely forgotten–until now. SUMMER OF SOUL shines a light on the importance of history to our spiritual well-being and stands as a testament to the healing power of music during times of unrest, both past and present. The feature includes never-before-seen concert performances by Stevie Wonder, Nina Simone, Sly & the Family Stone, Gladys Knight & the Pips, Mahalia Jackson, B.B. King, The 5th Dimension and more. “Summer of Soul (…or, When the Revolution Could Not be Televised),” is the first official project under the recently announced Onyx Collective brand.

Frank William Miller Jr.
Art Director Consultant @Summer of Soul
Frank has over 15 years of design and art direction experience in both corporate and entertainment sectors. He served as the Digital Brand Manager and Art Director at HOT 97 the #1 Hip Hop and R&B radio station in New York, managing the station’s visual presence online on the street, as well as their massive annual summer concert Summer Jam, as an Online Producer for Rockstar Games working on record setting titles such as Red Dead Redemption and Grand Theft Auto 5, as the Art Director at Italian Wine Merchants in New York City’s Union Square, and recently as a Marketing Designer for Complex Magazine’s west coast office. He’s balanced that time working on passion projects with music creatives such as A Tribe Called Quest and The Roots, special projects for apparel brands such as Nike and 10.Deep, and educational equity and non-profits such as University Beyond Bars through which he’s taught a volunteer intro to graphic design course at the largest state prison in Washington.
Joseph Patel
Producer @Summer of Soul
Joseph Patel is an award-winning Producer, Director, and Writer on documentaries and short films. He recently produced the feature documentary, Summer Of Soul (…Or, When The Revolution Could Not Be Televised), directed by Ahmir ‘Questlove’ Thompson, winner of both the Grand Jury Prize and Audience Award for US Documentary at the 2021 Sundance Film Festival. Patel began his career as a music & culture journalist. He went on to produce and direct television and digital content for MTV News & Docs and Vice Media, and served as Content and Creative Director at The FADER and Vevo. Patel is Producing and Directing an upcoming documentary based on the best-selling book, Contact High: A Visual History of Hip-Hop with Vikki Tobak and Fab 5 Freddy.