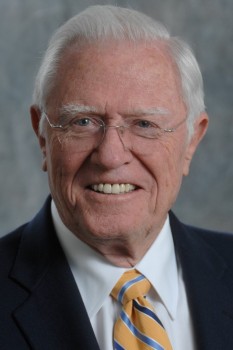 Charles E. Young took office as chancellor of UCLA on Sept. 1, 1968, and was formally inaugurated on May 23, 1969 — the 50th anniversary of the university’s founding. His inaugural pledge was to advance UCLA “from the second level of good universities to the first rank of excellent universities.” Today, UCLA is in the distinguished company of the finest universities in the nation and the world.

When he became chancellor at the age of 36, Dr. Young was the youngest person at the helm of any major American university. After nearly 29 years in office, he was the senior chief executive by tenure among his fellow chancellors and presidents nationwide. Chancellor Young retired on June 30, 1997.

Dr. Young presided over a complex organization that is one of the largest employers in Southern California and had an operating budget approaching $2 billion. He directed the rapid growth of UCLA — which educates more students than any other California college, public or private — toward its present distinction as one of the country’s most comprehensive and dynamic university campuses.

UCLA is widely recognized to be among the top 10 research universities in the nation; established in 1919, it is also the youngest of this select group. Few institutions can match UCLA’s comprehensiveness. In 1995, the National Research Council ranked 31 UCLA Ph.D. programs among the top 20 in their respective fields — third-best in the nation.

In the first months of Dr. Young’s chancellorship, UCLA had only one endowed professorship, library holdings of fewer than three million volumes, an ethnic minority enrollment of less than 23 percent, and an operating budget of $170 million. The campus today boasts more than 120 endowed faculty chairs, 6.7 million volumes in the UCLA Library, an ethnic minority enrollment of nearly 60 percent, and operating expenses approaching $2 billion. Extramural funding for the research program has skyrocketed during Chancellor Young’s tenure, from $66.4 million in 1968-’69 to a campus-record $406 million in 1995-’96. The private fund-raising program has likewise flourished, from $6.1 million raised in 1968-’69 to $190.8 million in 1995-’96 — a University of California record. UCLA’s endowment, which had a market value of $19 million on June 30, 1969, is presently valued at $752 million. By each of these measures, UCLA ranks among America’s premier universities.

Dr. Young’s association with the University of California dates to 1953, when he enrolled as a transfer student at UC Riverside. There, he served as the new campus’s first student body president. After graduating with honors in 1955, he pursued doctoral studies in political science at UCLA, earning his M.A. in 1957 and Ph.D. in 1960. In 1959, as a member of UC President Clark Kerr’s staff, he participated in the creation of the Master Plan for Higher Education in California and the University Growth Plan.

Dr. Young returned to UCLA in 1960 to serve in a series of executive posts in the administration of Chancellor Franklin D. Murphy: assistant to the chancellor (1960-62), assistant chancellor (1962-63), and vice chancellor for administration (1963-68). He also became a full professor in the political science department, an appointment he still holds. Following Chancellor Murphy’s resignation, Dr. Young was named his successor by the UC Regents on July 12, 1968.

Chancellor Young was recognized nationally and internationally for his leadership in higher education. He was chairman of the Association of American Universities. He served on numerous task forces and commissions of the American Council on Education, the National Association of State Universities and Land-Grant Colleges, and the Business-Higher Education Forum.

Committed to making internationalism and inclusiveness hallmarks of UCLA, Chancellor Young was an ardent spokesman on behalf of educational opportunity, inclusiveness and the value of ethnic and cultural diversity to the university experience. He served on the administrative board of the International Association of Universities and the National Committee on United States-China Relations, Inc., and chaired the board of governors of the Maureen and Mike Mansfield Foundation. In 1985, he received the Award for Inter-American University Cooperation from the Inter-American Organization for Higher Education. The chancellor and his wife, Sue K. Young, were jointly awarded the UCLA International Student Center’s 1987 Neil H. Jacoby International Award for their outstanding contributions to international education. In January 1997, the Coalition for International Education honored Dr. Young with its first International Education Leadership Award, in recognition of his contributions to the development of international studies at UCLA and other American universities.

Chancellor Young made UCLA an integral part of, and partner with, the Los Angeles region, reinforcing the importance of the university’s mission in service to the community. His commitment to public service was reflected in his leadership role in California Campus Compact, an organization he co-chaired that is part of a national coalition of colleges and universities striving to encourage student involvement in community and public service. Dr. Young also was active in efforts to improve elementary and secondary education; he serves on the Council of Trustees of LEARN (Los Angeles Educational Alliance for Restructuring Now), a coalition of leaders working to reform K-12 education.

A longtime member of the NCAA Presidents Commission, Chancellor Young often drew the national spotlight as a leading proponent of intercollegiate athletics reform. He was active in the movement to raise academic eligibility standards for student-athletes and curb recruiting abuses.

Chancellor Young is a respected adviser to numerous enterprises in the realms of business, education, the arts, and science and technology. He has served on a number of corporate boards in the finance, technology, and health-care industries and is currently a director of Intel Corp. and Nicholas-Applegate Capital Management. He is a member of the board of directors of the Academy of Television Arts and Sciences Foundation, the Los Angeles World Affairs Council, and Town Hall of California. He participates in several organizations that examine the role of science and technology in society, and the research agenda for universities. These include the Carnegie Commission Task Force on Science and Technology and the States, the National Academy of Sciences’ Government-University-Industry Research Roundtable, and the Board of Governors of the Foundation for International Exchange of Scientific and Cultural Information by Telecommunications.

Chancellor Young has been honored many times for his contributions to academe and community endeavors. He was elected a fellow of the American Academy of Arts and Sciences in 1994, cited for his “outstanding and recognized accomplishments in educational and scientific administration.” In May 1996 he was among a select group of leaders in education, community affairs, the arts and culture, and communications recognized by the Central City Association as a “Treasure of Los Angeles.” The Hugh O’Brien Youth Foundation bestowed its prestigious Albert Schweitzer Leadership Award upon him in December 1996.

Dr. Young has received several tributes from the UCLA Alumni Association, including its highest honor, the Edward A. Dickson Alumnus of the Year Award, which was presented in May 1994 in recognition of his 25th anniversary as chancellor. The UC Riverside Alumni Association gave him its 1996 Distinguished Service Award, honoring his contributions to higher education and his tenure as UCLA chancellor. Also in 1996, Chancellor Charles and Sue Young were named Honorary Fellows of UCLA’s College of Letters and Science.