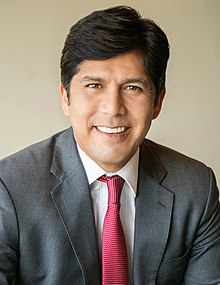 Kevin de León is President pro Tempore Emeritus of the California State Senate. He is the son of a single immigrant mother with a third grade education who worked as a housekeeper and held other jobs to support her family. After becoming the first and only in his family to graduate from high school and college, Senator de León rose from the San Diego barrio of Logan Heights to lead the California State Senate, the first Latino to do so in more than a century.

As leader of the California State Senate, he led the nation to establish landmark gun-safety legislation, clean-energy mandates, climate and environmental protections, and immigration reforms. Most recently, Senator de León authored and passed Senate Bill 100 which legally mandates California, the figure largest economy in the world, to achieve 100 percent clean-energy by the year 2045. He is also the author of Senate Bill 54, the California Values Act, also known as the Sanctuary State Bill. Despite a lawsuit brought by former Attorney General Jeff Sessions and the Trump administration, a federal judge ruled that Senator de León’s California Values Act is constitutional and the law of the land in California. Senator de Leon established that largest expansion of retirement security since the Social Security Act with the newly established CalSavers program. Starting in 2019, every Californian without a defined benefit or defined contribution plan at their workplace will be automatically be enrolled in Senator de León’s retirement savings program.

Before entering into politics, Senator de León served the public as a community organizer, taught U.S.citizenship courses and English as a second language, and advocated for public schools. He graduated with honors from Pitzer College at the Claremont Colleges. Senator de León is a Rodel Fellow at The Aspen Institute and lecturer at UC Berkeley, UCLA, Stanford, and USC. He has one daughter and a dog named Popeye.