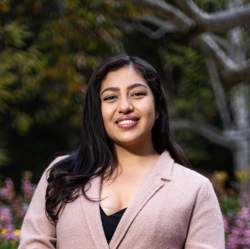 Kimberly Fuentes, MSW is a recent graduate of the UCLA Luskin School of Public Affairs in Social Welfare. She is currently a first year PhD student in Social Welfare at Luskin where she studies the impacts of criminalization on sex working communities, the ways they resist criminalization, and the role that social work can play in uplifting this resistance. She hopes to utilize participatory action research and art-based methods to identify the alternative systems of community care that are used to mitigate and resist the forces of the police state and theorize the state from the vantage point of sex workers. She serves on the board of directors at the Sex Worker Outreach Project – Los Angeles (SWOP-LA) where she leads a nationwide support group for current and former sex workers and provides direct support to street-based workers through a harm reduction framework. Kimberly is a student affiliate of the California Center for Population Research (CCPR) and a recipient of the Ford Foundation Predoctoral Fellowship. She is currently a research assistant at the UCLA Hub for Health Intervention, Policy and Practice where she works on research studies exploring the effect of criminalization on violence and victimization of sex workers.

Kimberly earned her Master of Social Welfare in Social and Economic Justice with a certificate in Global Health and Social Services. During her time in the MSW program, Kimberly received the Graduate Opportunity Fellowship (GOFP) and served as a Luskin Leadership Fellow at the Office of Child Protection (OCP). Her completed research capstone, “Revolutionizing Community Under the Red Umbrella: Intersectional Inquiry with Sex Workers on Protective Factors in Los Angeles, CA”, received awards from the Center for the Study of Women’s Black Feminism Initiative, UCLA Lewis Center for Policy Research, Franklin D. Gilliam Jr. Social Justice Award, and a departmental award for outstanding research.

She is a proud first-generation student whose family immigrated from Oaxaca, Mexico. Prior to UCLA, she earned a B.A. in Environmental Studies and Geography with a minor in Math and Science education from UC Santa Barbara.