Director of the Global Lab for Research in Action; Professor of Public Policy 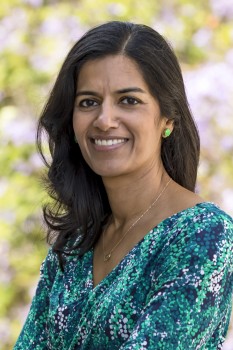 Manisha Shah is the Franklin D. Gilliam, Jr., Endowed Chair in Social Justice and Professor of Public Policy at the UCLA Luskin School of Public Affairs and Founding Director of the Global Lab for Research in Action. Shah is also a Faculty Research Associate at the National Bureau of Economic Research, a Faculty Affiliate at UC Berkeley’s Center for Effective Global Action,  The Abdul Latif Jameel Poverty Action Lab, and The Bureau for Research and Economic Analysis of Development, and a Research Fellow at the Institute for the Study of Labor. Shah is an economist who received her Ph.D. from UC Berkeley.

Shah is a development economist whose primary research and teaching interests lie at the intersection of applied microeconomics, health, and development. She has written several papers on the economics of sex markets in order to learn how more effective policies and programs can be deployed to slow the spread of HIV/AIDS and other sexually transmitted infections. She also works in the area of child health and education. Shah has been the PI on various impact evaluations and randomized controlled trials and is currently leading projects in Tanzania, Indonesia, and India. She has also worked extensively in Ecuador and Mexico. Her research has been supported by Bill and Melinda Gates Foundation, William and Flora Hewlett Foundation, the World Bank, and the National Science Foundation among others. She is an editor at Journal of Health Economics and an Associate Editor at The Review of Economics and Statistics. Follow Shah on Twitter @Manisha_econ.

Scaling Up Sanitation: Evidence from an RCT in Indonesia (with L. Cameron and S. Olivia),  Journal of Development Economics, May 2019, vol 138.
Media Coverage: : VoxDev

Handedness, Health and Cognitive Development: Evidence from Children in the NLSY (with D. Johnston, M. Nicholls, and M. Shields), Journal of the Royal Statistical Society, Series A (Statistics in Society), 2012.

The Prostitute’s Allure: The Return to Beauty in Commercial Sex Work (with R. Arunachalam), B.E. Journal of Economic Analysis & Policy, 2012.

Sex Work and Infection: What’s Law Enforcement Got to Do with it? (with P. Gertler), Journal of Law and Economics, November 2011, 54.
Media Coverage: The Economist

Economics of Sex Work and Policy Considerations (with S. Cunningham). forthcoming in Handbook of Labor, Human Resources and Population Economics

Human Capital Investment in the Presence of Child Labor (with N. Bau, M. Rotemberg, and B. Steinberg), 2020. NBER Working Paper 27241.