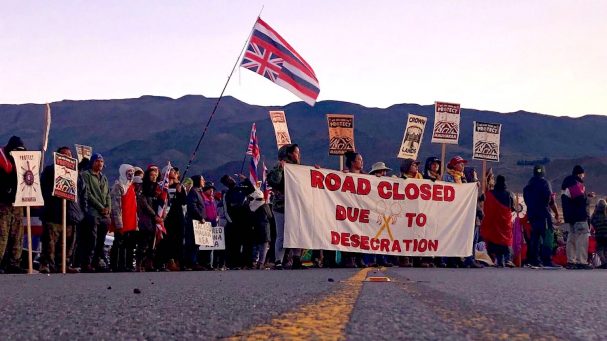 Randall Akee, associate professor of public policy, weighed in on protests sparked by the construction of a giant telescope on Mauna Kea, Hawaii’s highest mountain. Native Hawaiians are attempting to stop construction of the $1.4-billion Thirty Meter Telescope (TMT) on the site, which is considered sacred ground. “The sight of some of the most revered and esteemed Native Hawaiian elders being hauled off the mountain in plastic tie bands was appalling to Native Hawaiians everywhere,” Akee wrote in a piece for Real Clear Markets. These images threaten Hawaii’s $16-billion tourism industry, and the cultural and environmental costs of building the telescope would be great, he wrote. Akee was also cited in a Vox report on the protests. “The opposition to the TMT construction is like the straw that broke the camel’s back,” he said. “It represents decades of poor management of Hawaii’s natural resources and prioritizing of economic interests ahead of community interests.” 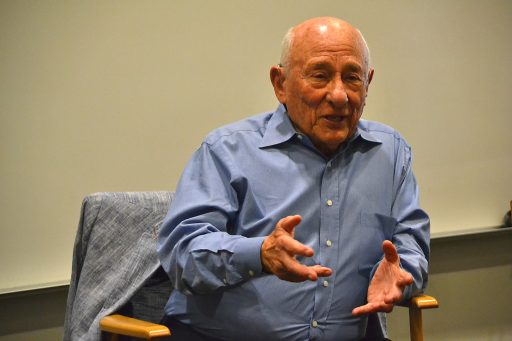 Meyer Luskin was the keynote speaker for “Waste Not: How to Make the Most of What We’ve Got,” part of the "Off the Table" series. Photo by Stan Paul

If a batch of bread has too much flour when it makes its way to the factory assembly line, the dough is a no-go. But what is a profitable company to do when it’s left with unsellable food waste?

Recycle it, of course.

At an Oct. 18 lecture, Meyer Luskin explained the idea and logistics behind the successful national food recovery business for which he’s worked over 50 years. In conversation with Urban Planning lecturer Paula Daniels, founder of the LA Food Policy Council, Luskin said he began to think critically about food conservation early in life.

“I’ve always believed in recycling,” he said. “As a young man, I’d always worry about ‘what happens when we run out of this, or don’t have enough coal?’”

Luskin has made reducing food waste a centerpiece of his career. As chairman and chief executive officer of Scope Industries, a company he joined in 1961 that specializes in food recycling, Luskin led the expansion of an operation geared at turning food production waste into animal feed.

The concept is simple, Luskin explained to the 50-plus students, faculty and community members who attended the afternoon lecture. When a factory produces a batch of food that doesn’t meet its retail standards, assembly-line workers will place undesirable product into bins, provided by Luskin’s company.

The bins, which often contain complete products — including packaging and other inedible materials — are transported to processing plants where the grain-based food matter is separated, ground and dried to rid it of moisture, ensuring the food will survive the shipping process. The finished product is then sold to farmers to be used as livestock feed.

Luskin brought in a mason jar filled to the brim with a treated batch of animal feed to show the class. “This may have once been a huge mound of garbage,” he said, explaining that sometimes assembly-line workers treat collection bins as trash receptacles.

“This looks like something we could eat ourselves!” Daniels said, examining the jar.

Even though the finished product might actually be fit for human consumption, people are not actually allowed to eat it per Food and Drug Administration Standards, Luskin informed attendees.

“This product has been on the floor, most of the machinery is not stainless steel, but when it comes out of our dryer … we’ve killed every bug that you can imagine,” he said. 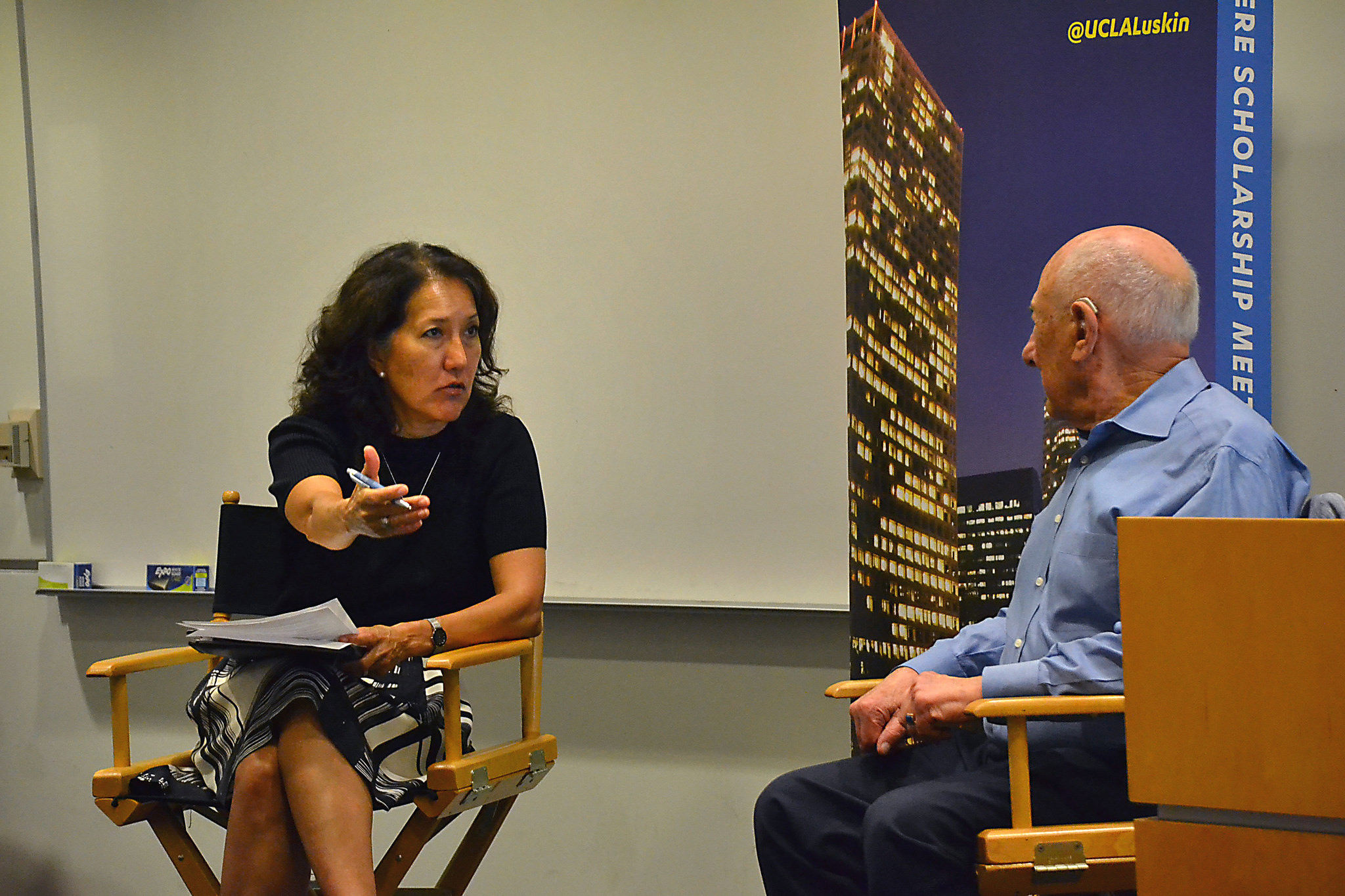 Paula Daniels, Luskin Urban Planning lecturer and founder of the LA Food Policy Council, moderated a conversation with Meyer Luskin about his career in the food waste recovery industry. Photo by Stan Paul

Luskin’s company began with a single processing facility in 1962, handling 100,000 pounds of food per year. Today, the company has 17 plants across the country and recycles 2.6 billion pounds of food annually. Each ton of feed sells for about $120, or six cents per pound — allowing farmers to affordably feed livestock with grain products that might have otherwise been thrown away.

“It’s important to hear from Meyer Luskin about the work that he’s been doing in Los Angeles and around the country for a long time and how it contributes to what we’re calling the ‘circular economy,’” Daniels said before the event. “It’s a great example for a direction that we need to go in as a society in terms of dealing with the excesses of what we produce. Meyer’s model takes that excess and makes it an asset.”

The lecture was the first speaker event of the Luskin School of Public Affairs’ ongoing “Off the Table” series of discussions, screenings and events aimed at educating the UCLA Luskin community about where our food comes from and how it can become more sustainable.

Among the themes addressed by “Off the Table” is the concept of food justice and responsibility to ensure the food that is produced does not end up in landfills — tying in neatly with the conversation about Luskin’s work and the challenge to prevent further food waste.  A full program of “Off the Table’ events can be found here.

“Harvesting Change: Fostering Partnerships for Food Security” took place Oct. 26 at the Luskin School and featured a festival held on the 3rd Floor Commons of the Public Affairs Building.

Mental health expert Rhea Holler, Ph.D., spoke about the shame and feelings of failure often experienced by people who are unable to afford food for themselves and their families.

Attendees also heard from Frank Tamborello of Hunger Action LA, which is working to end hunger and promote healthy eating through a variety of advocacy, direct service and organizing efforts that benefit Los Angeles residents. 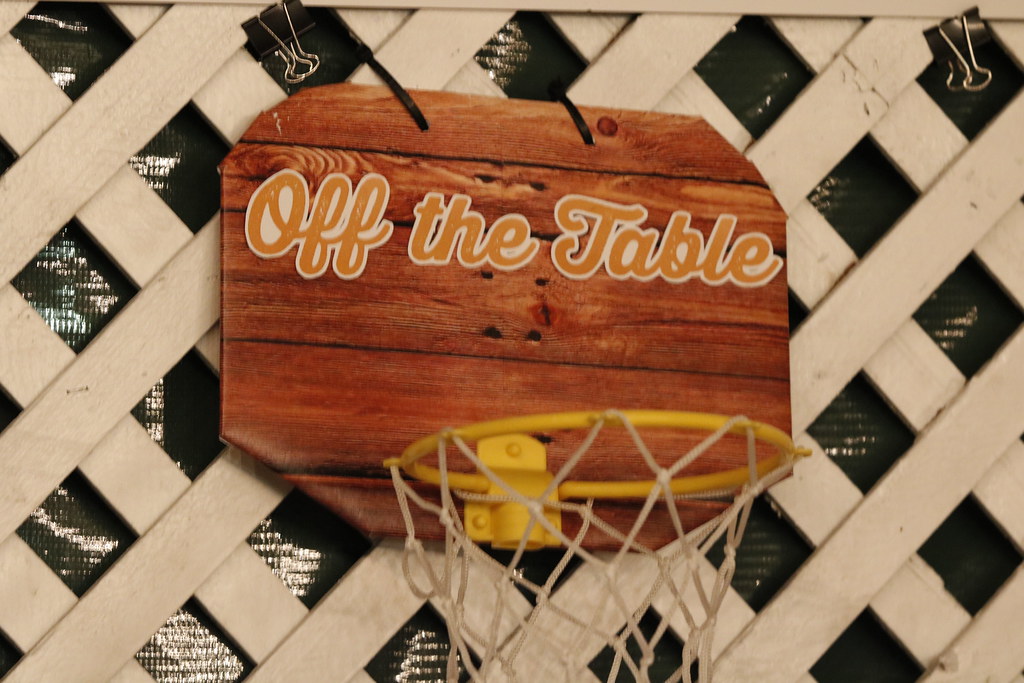 On Nov. 7, 2017, a panel discussion titled, “Breaking Bread: Community Building with Veterans and Farming,” focused attention on the community and health benefits of urban farming for the veteran population.

A reception at La Kretz Garden Pavilion in the UCLA Botanical Gardens preceded the panel discussion, which focused on efforts to revitalize a 14-acre garden on the U.S. Veteran Affairs campus in West Los Angeles. The event was timed to coincide with other university activities in advance of this year’s Veterans Day holiday. 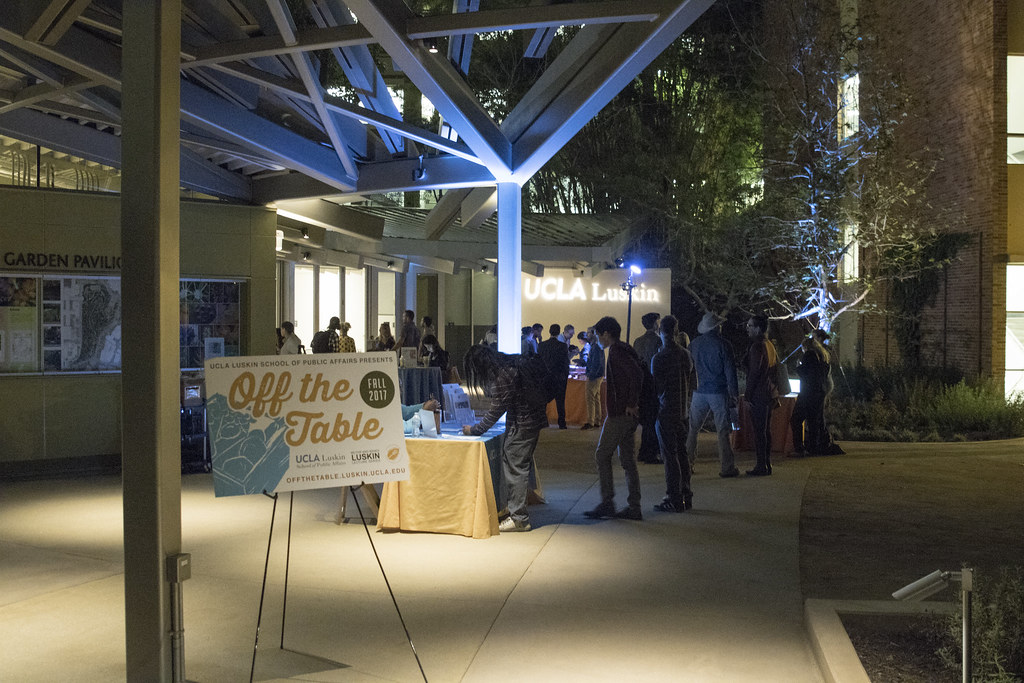 On Nov. 13, Maria Elena Chávez’s presence at the screening of “Dolores,” a documentary depicting the life and legacy of civil rights activist Dolores Huerta, sent a powerful message about generational activism and fostering change within minority communities.

The political landscape of Huerta’s generation, where there were fights for basic human rights of farm workers, is not so different from today, Chávez said about her mother’s efforts. As the film depicts, marginalized immigrant farmworkers living in poverty were able to organize and fight for their rights, benefitting generations to come. Huerta, now 87, was at the heart of this movement, demanding respect, fair wages and access to clean water on the job.

Chávez described her mother as “unstoppable” and “passionate” as she has continued to make an impact in her community after leaving the Unified Farm Workers Movement organization and creating the Dolores Huerta Foundation.

Chávez also discussed her mother’s impact on her life and professional choices as a political filmmaker and civil rights activist. “It’s in my blood,” said Chávez, who is the daughter of Huerta and Richard Chavez, the brother of César Chávez.

She also spoke of the challenges of growing up in a politically active family and adversities she faced because of her mother’s dedication to the civil rights movement while raising 11 children.

“Maria Elena Chavez’s visit to UCLA provided a direct appeal to join the movement for justice,” said Sonja Diaz, director of the Latino Policy and Politics Initiative, which co-sponsored the event. “The political landscape that mobilized farmworkers to demand respect, fair wages and workplace access to restrooms and water is not too different from today’s crisis of inequality. As the film ‘Dolores’ makes clear, farmworkers and countless other U.S. workers living in poverty have the skills to organize, and those of us with means have the obligation to support.” 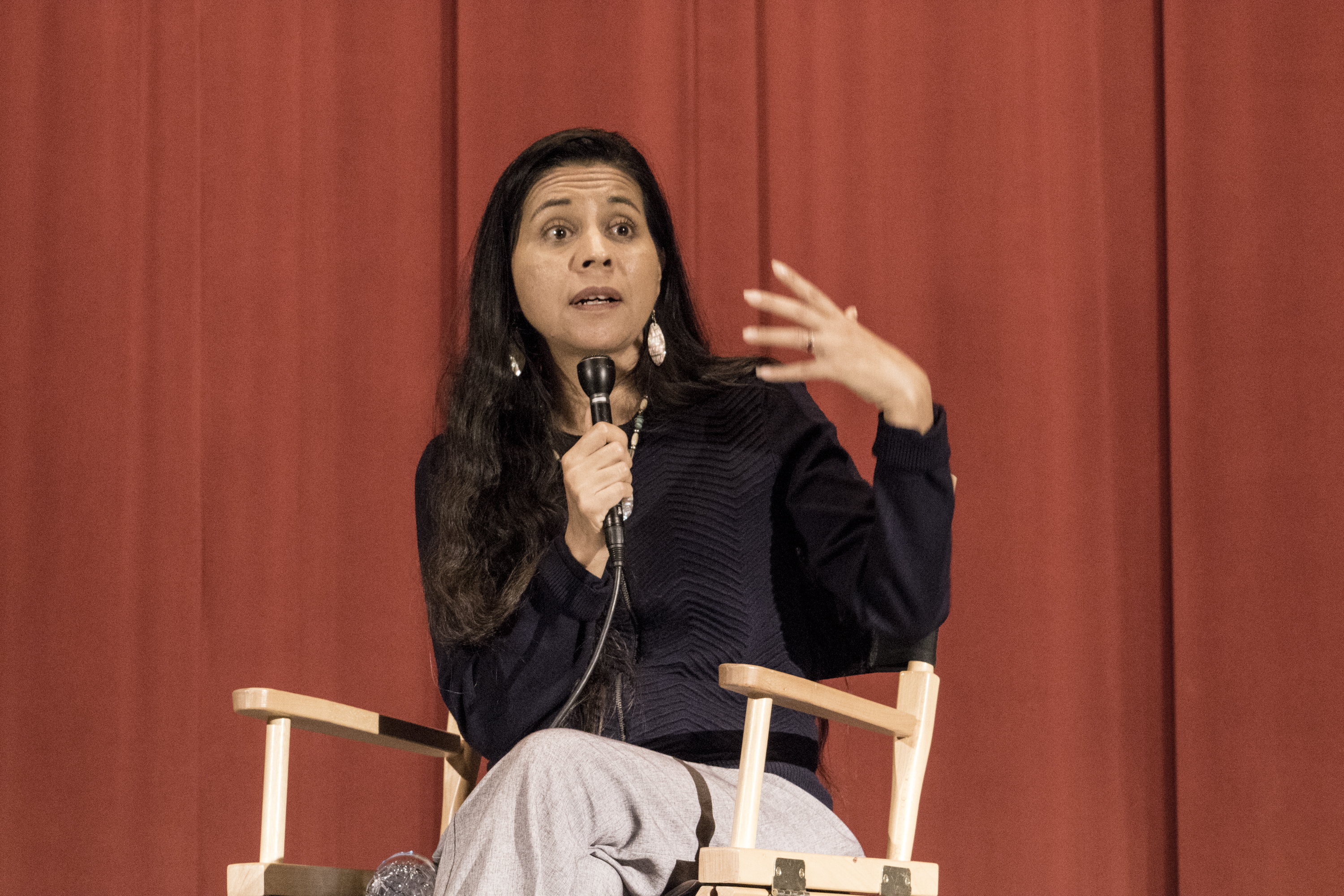 As first-year Master of Urban and Regional Planning students, Bianca Juarros and Esteban Doyle wanted to find meaningful ways to get involved with the UCLA campus community. The Luskin Food Mentorship program provided a way for them to do just that, while also exploring interesting and relevant topics. Read about their experience coordinating a volunteer event that brought UCLA students together on the Saturday before Thanksgiving at the L.A. Kitchen to  prepare food for community service organizations such as homeless shelters and senior centers. 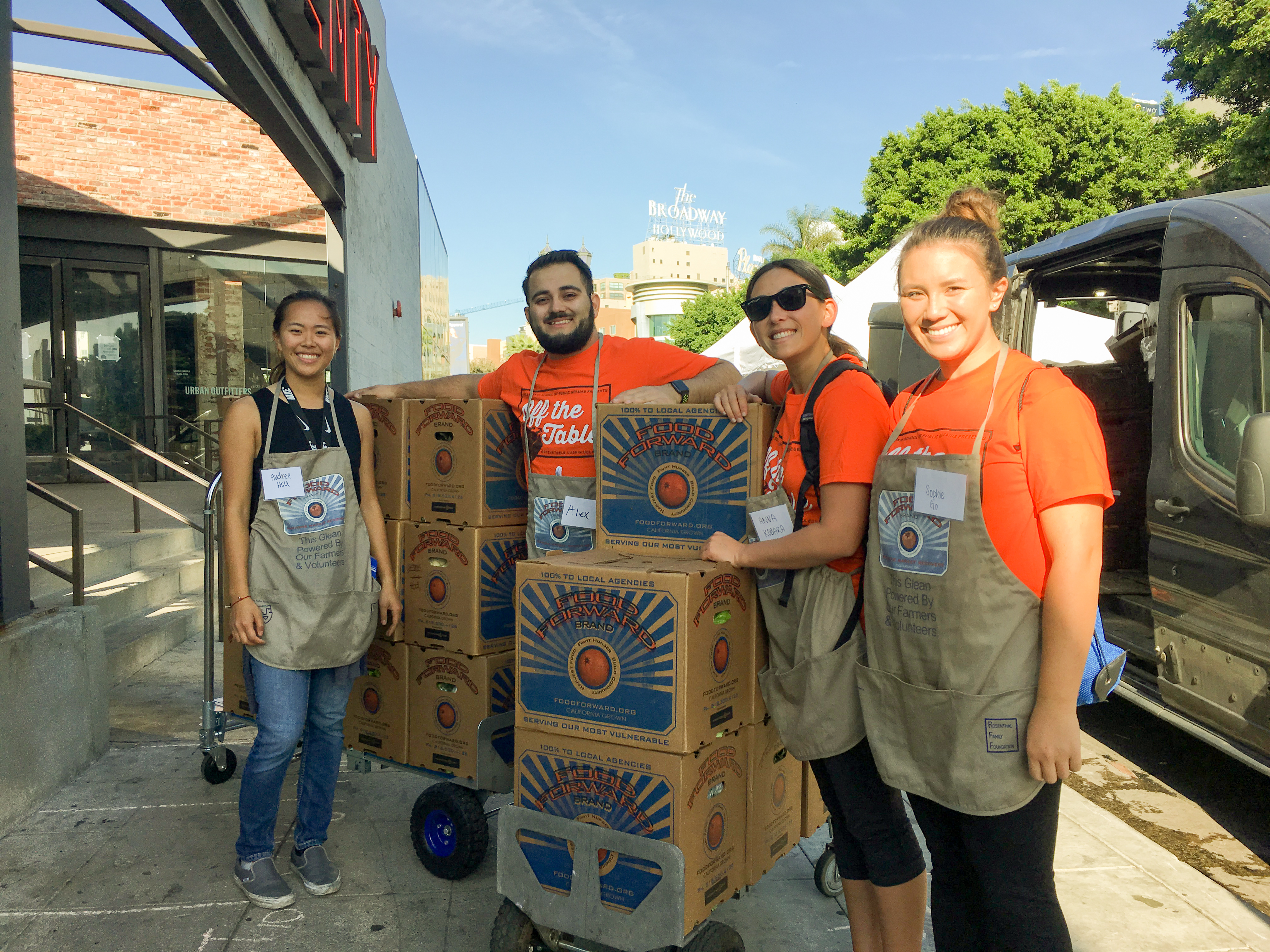 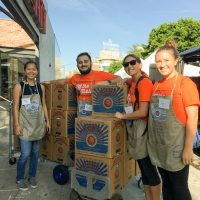 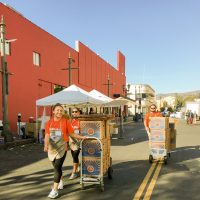 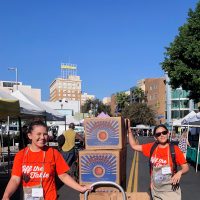 The UCLA Luskin School of Public Affairs and the UCLA Food Studies Graduate Certificate Program wrapped up its 10-week “Off the Table” series on urban agriculture, food security, and food policy with a moderated discussion on the sustainability of social enterprises within the food industry led by Evan Kleiman, chef and host of “Good Food” on KCRW. She was joined by panelists Anar Joshi of  Everytable, Kaitlin Mogentale of Pulp Pantry, Nick Panepinto of L.A. Kitchen and Karla T. Vasquez of SalviSoul during a gathering on Nov. 30 at the L.A. Kitchen facility in Lincoln Heights near downtown Los Angeles. Among other topics, the speakers talked about their efforts to promote healthy eating among young people. “One of our most successful programs was cooking lessons for kids,” Vasquez said during the panel discussion. “We told them, ‘You can like something, love something, or hate it. But you have to make it. There’s so much food in the world, and you get to try it all!’” Afterward, attendees had a chance to do some cooking themselves, making a vegetarian ricotta carpaccio from scratch under Kleiman’s direction. Download the recipe. View a video of the panel discussion. Browse a Flickr album of images from the event below. 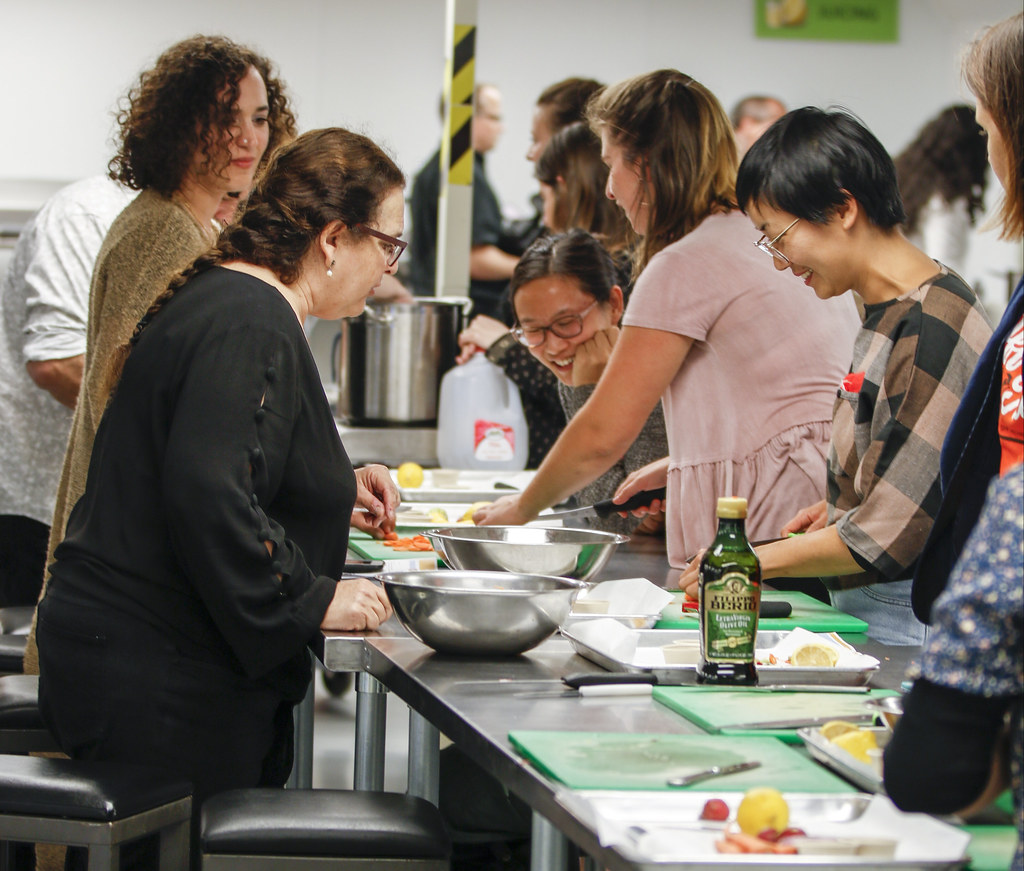 Members of the UCLA Luskin community gathered at Wattles Farm on Oct. 7, 2017, to serve as leaders during UCLA’s Volunteer Day. Once on the farm in the heart of West Hollywood, this assorted group of Luskin faculty, staff and students organized and worked alongside UCLA undergraduates to participate in ongoing work there. Wattles Farm is an organic community farm whose mission is to provide the area’s diverse local population with a rare opportunity to participate in sustainable agricultural practices. Luskin volunteers not only got to spend a morning aiding with maintenance of a sustainable mainstay of Los Angeles, they also further united with UCLA and the greater Los Angeles community through conversations and life stories shared over snacks of oranges, granola and water. Hover over the image below to access a Flickr gallery of photos taken that day by Aaron Julian. 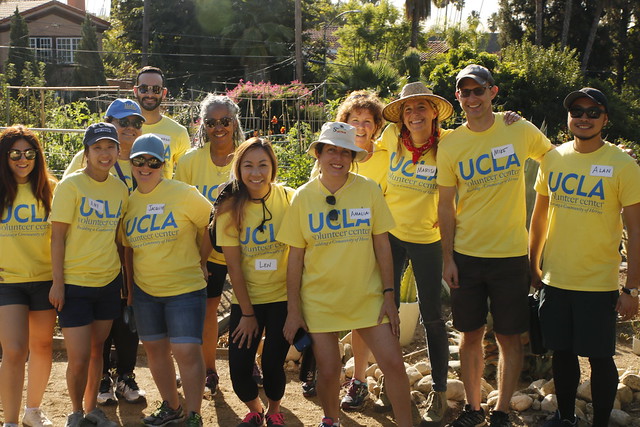