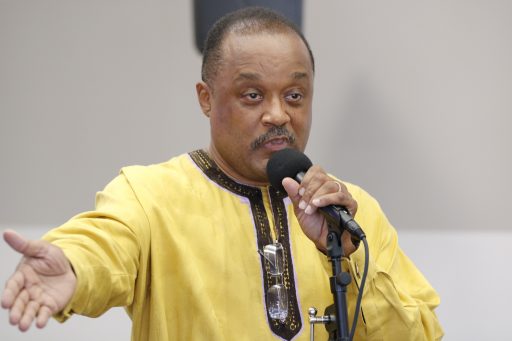 Larthia Dunham described how the event’s inauguration was driven by a need to recognize black culture and its place at UCLA and in the greater Westwood area. Photo by Aaron Julian

“Shadowed beneath thy hand, may we forever stand, True to our God, true to our native land.”

This closing couplet of “Lift Every Voice and Sing,” often referred to as the Black American National Anthem,” rang out at the Luskin School of Public Affairs on May 16, 2017, marking the start of the 10th annual Sanctuary Event hosted by the Department of Social Welfare’s Black Caucus.

Inspired by the writing of Assata Shakur and themed “Nothing to Lose but Our Chains,” the Sanctuary Event is held each year at the time of Malcolm X’s birthday on May 17. It focuses on issues of importance to people of color, particularly the black community. Topics of discussion this year included the role of intersectional identities and communication among and between different communities, as well as empowering and informing UCLA Luskin students about how to proceed in the current social and political climate.

Larthia Dunham of the social welfare field education faculty described how the event’s inauguration was driven by a need to recognize black culture and its place at UCLA and in the greater Westwood area.

“We have to understand that being black is very important in identifying who we are, why we’re this way, and what our culture is all about,” Dunham said.

A traditional libation was then poured out as a way of honoring and remembering important past and present figures, as well as friends and family. Harambee, meaning, “let’s pull together,” was said in response following each of Dunham’s processions.

Continuing with the themes of traditions and culture, the Black Caucus members provided and served food described as fundamental for classic celebrations.

Dunham then detailed the historic role that food and sharing meals has had going back generations in the black community and in building relationships. “We bring food because food brings peace. If there is someone you don’t like, go have coffee, break bread and enjoy each other because you never really know what you have in common.”

Funmilola Fagbamila, activist-in-residence for the Institute on Inequality and Democracy at UCLA Luskin and the arts and culture director for Black Lives Matter Los Angeles, later joined the conversation as part of a panel to provide insights about her work as an author, activist and intellectual. Fagbamila encouraged a proactive engagement in social movements, but she cautioned that striking a balance between that work and other passions is crucial in maintaining effective long-term activism.

“People think if they engage thoroughly and if they try to become what they perceive as an activist or organizer or protestor that they would have to sacrifice their joy. You don’t need to sacrifice your joy, your wellness and your happiness to be effective,” Fagbamila said.
Fagbamila further explored the topic of identity by imparting her own experiences as a woman of Nigerian descent. “My family life is very much informed by being a Nigerian person, but when I walk around in the world you can’t tell I’m a Nigerian … you can just tell that I’m a black woman.”

Kiya Roberts talks about the complications of love — especially between black women and men — during "Minority Report" at UCLA. Photo by Les Dunseith

It can be difficult to truly empathize with another community’s narrative. Tragedies and injustices toward a racial group only resonate up to a point for those not directly impacted. But true empathy cannot be felt without experiencing the narrative up close.

Scott St. Patrick and his company brought the black American experience up close to a diverse crowd of nearly 200 students and community members when they took to the stage in the Broad Art Center.

Sponsored by the Department of Social Welfare at the UCLA Luskin School of Public Affairs, “Minority Report” is a nine-vignette journey through the black experience in America. Each act was a solo piece by one of seven actors articulating a narrative that touched on a different area of the history of black Americans.

“In Social Welfare at Luskin, we are committed to struggling with racism as a social justice issue,” Gerry Laviña, director of field education for the Luskin School, said as he opened the evening. “We also acknowledge and will acknowledge tonight that the struggle has gone on for generations and continues today.”

St. Patrick, the show’s creator, led off with an extended poem that addressed some of the program’s hardest-hitting themes. St. Patrick began with an emotionally charged lament of the “epidemic of violence” against African Americans by police, which followed a montage of cellphone footage of recent acts, including the death of Eric Garner by police in which Garner could be heard gasping, “I can’t breathe.”

Scott St. Patrick and his company brought the black American experience up close in a sequence of nine vignettes at the Broad Art Center on Nov. 1. Photo by Les Dunseith

St. Patrick’s opening monologue, which slammed a system in which African Americans are predisposed to institutionalized racism toward blacks and drew parallels with the shooting of the Cincinnati Zoo’s gorilla, Harambe, set the tone for the following acts.

Several of the most impactful vignettes described historical instances of oppression toward African Americans — both violent and socially oppressive. Detra Hicks lamented the cyclical nature of racism toward blacks in America in a piece that linked the violent 1955 murder of black teenager Emmett Till in Mississippi to the more contemporary killings of Tamir Rice and Jordan Davis.

“Where the hell is peripety?” she exclaimed, referring to the literary device wherein a protagonist’s misfortunes are reversed.

In between each vignette, a clip of relevant video or audio set the tone for the following act. While much of the content focused on graphic illustrations of violent injustices and systematic inequality suffered by blacks, a piece by comedian Donald George probed some of these areas with a touch of humor. He likened the 2016 presidential election to a choice between different sexually transmitted infections in the first fully humorous segment of an otherwise serious series.

In “Black Tulsa,” Marcuis Harris delivered an informative piece on how, even in instances of success for the black community, racism rears its ugly face in a violent and destructive manner. Harris’ piece focused on the destruction of a thriving Tulsa, Okla., black community, which was leveled by supremacists in a “race riot” in 1921.

Even the terminology used to describe these instances is part of the issue, Harris said. “‘Race riot’ implies equal footing,” he said, describing the overnight destruction of Greenwood. “This was terrorism.”

Jaclyn Tokos, the only non-black performer of the evening, described the various points of contention — with both blacks and whites — she has faced as a white woman engaged to a black man.

“You can’t teach someone who to love,” she asserted, following a video of boxing legend Muhammad Ali’s 1971 interview in which he explains why he would never choose to marry outside of his race.

Several performers wore attire related to their performances, though Tokos’ donning of a “Black Lives Matter” t-shirt (her fiancé’s, she said) not only made a strong impact, it also reminded audiences of the times. “Minority Report” was performed at a critical time for race relations in America and to be reminded of this in an aptly named piece, “Interracial Love,” was pivotal to the message.

Tokos was followed by Kiya Roberts, who continued to preach love — between blacks. “I don’t need you, but I want you,” Roberts says to no man in particular in her vignette, “It’s Complicated…” The pursuit of love as a means of resolution to the pain between races was stressed more than once during the performances.

As the evening came to a conclusion, “Minority Report” became a “call to action,” to fight injustice and inequality with the power of love. Audience members were left with an “it’s on us” mentality and affirmation that love truly is the only way forward.

St. Patrick performed in two other acts, including the closing. In “Katrina,” St. Patrick led a multimedia-guided personal drop-in to the conditions inside the Superdome in post-Hurricane Katrina. For several days following the devastating storm in 2005, thousands of New Orleans residents were told to seek shelter at the stadium, having been promised provisions. However, the nearly all-black population housed in the Superdome went largely neglected, with few-to-no rations or supplies brought in, and horrific restroom conditions — all on top of deep emotional trauma.

In the most moving moment of the performance, St. Patrick brought the audience inside the Superdome and shared vivid descriptions of the sights and smells. “Many of you couldn’t even last one minute,” he said. Those who dared to attempt to flee to a neighboring community came across a battalion of armed guards, who blocked access to the relatively well-supplied Jefferson Parish.

As the audience absorbed the horror experienced in the days following Katrina, they were reminded of the underlying message of the evening: What ethnicity is experiencing this travesty? Would the conditions have been the same had the ethnic makeup of those inside the dome been different?

After witnessing nine vignettes of reflection, the audience is more likely to acknowledge the ugly truth that is the “Minority Report.” No. No it would not.

Read more about the genesis of “Minority Report” and why Social Welfare Chair Todd Franke chose to sponsor it at UCLA.