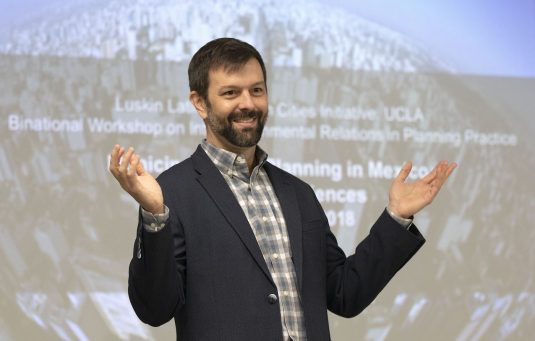 A new initiative at the UCLA Luskin School of Public Affairs is strengthening connections among urban planning students, educators and practitioners from across the Americas.

Ciudades, as the Latin American Cities Initiative is known, taps into the expertise of scholars and professionals whose cultural, historical and geographical ties run deep, said Paavo Monkkonen, director of the venture and associate professor of urban planning and public policy.

“Los Angeles shares an early history of urbanization with many cities across the Americas,” said Monkkonen, whose research into housing, land use and sprawl in Mexico and other countries inspired him to establish Ciudades, with support from UCLA Luskin Dean Gary Segura.

“Academia and professional practice can benefit a lot from greater levels of communication,” and that interplay creates a spirited teaching environment, Monkkonen said. “Planners in Los Angeles and across California’s cities can learn a lot from the urbanism of Latin America.”

The mission of Ciudades is expansive, Monkkonen said.

“Urbanists can learn from one another’s experiences with issues ranging from public space, mobility, historical preservation and redevelopment to indigeneity, local democracy, integration and local public finance,” he said.

Since its launch in January, Ciudades has pursued an ambitious agenda: a weekly speaker series; a binational workshop bringing together city, state and federal leaders from California and Mexico; creation of an inclusive website, with translations in Spanish and Portuguese; and an effort to fund student research and internships.

The connections that Ciudades is forging will make UCLA Luskin a draw for graduate students, planners and policymakers from across the region, Monkkonen said.

“We hope that this initiative is the beginning of something larger that deepens connections and intellectual exchange with students, educators and professionals across South, Central and North America,” he said.