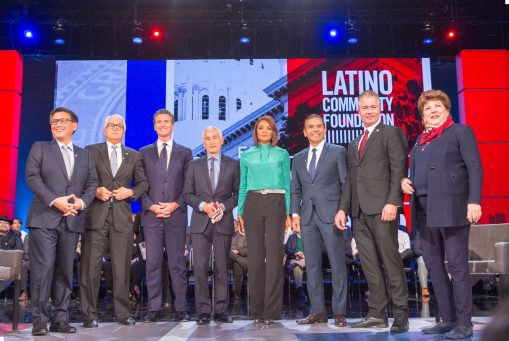 UCLA Luskin was an active participant in the 2018 California Gubernatorial Forum held Jan. 25, 2018, at UCLA during which six candidates debated issues such as immigration policy, health care, education and ethics.

Dean Gary Segura spoke at a VIP reception that preceded the debate and later welcomed attendees inside Royce Hall to the forum, which was sponsored by the Latino Community Foundation, a San Francisco-based group that invests in Latino-led organizations, and moderated by anchors Jorge Ramos and Ilia Calderón of Univision, a television and media company. 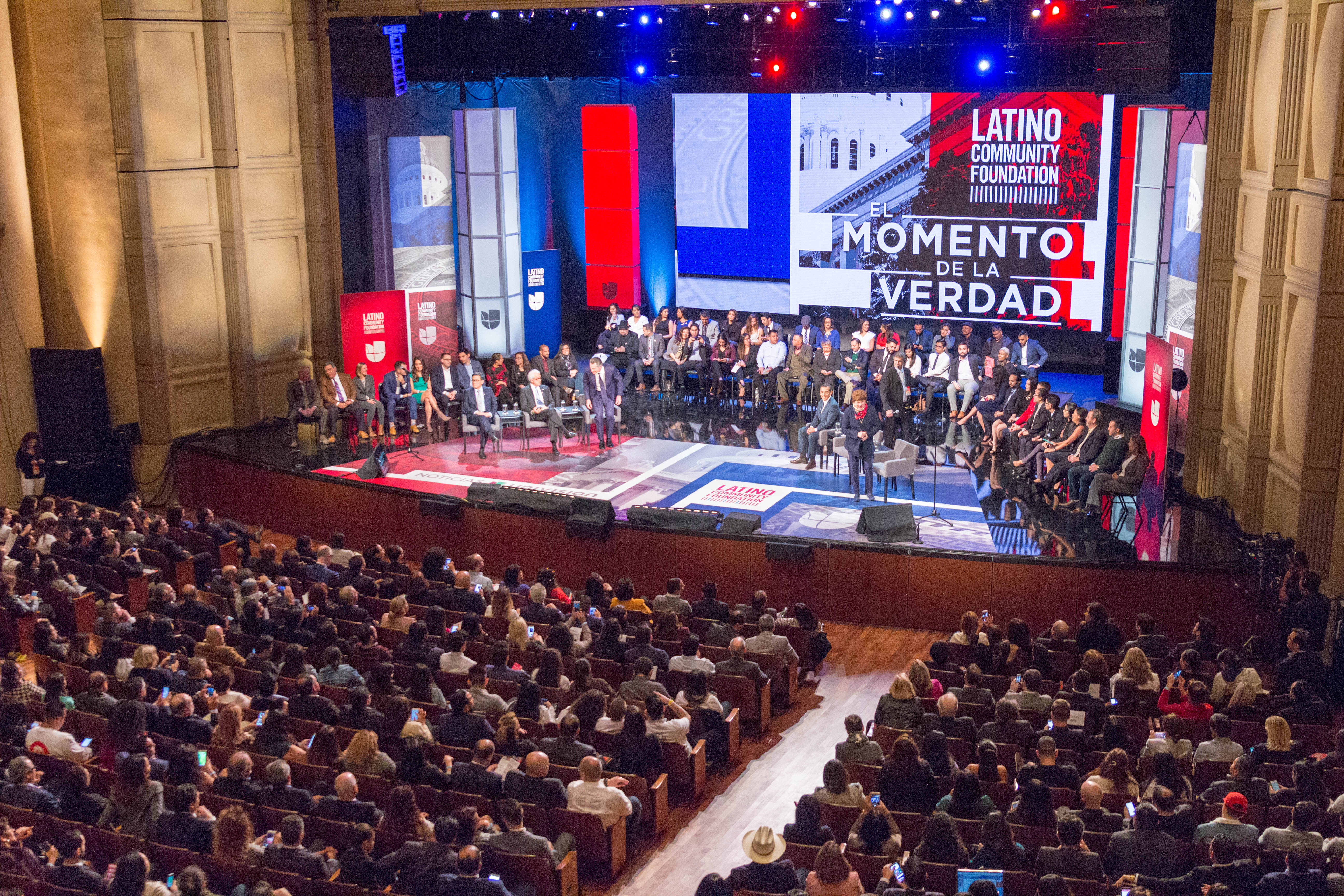 The Latino Community Foundation and Univision News hosted the 2018 California Gubernatorial Forum on Jan. 25, 2018, in Royce Hall at UCLA. 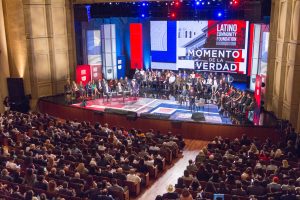 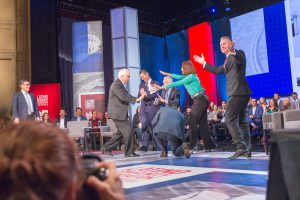 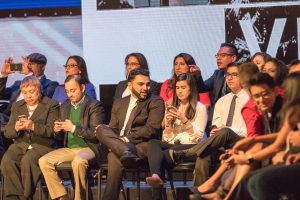 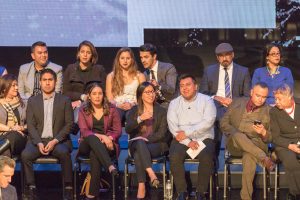 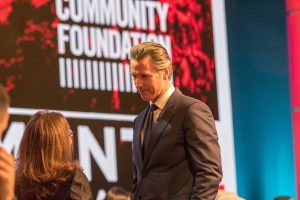 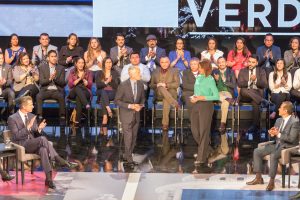 The Latino electorate, whose political clout continues to grow in California, could decide the governor’s race, and a focus on issues of importance to minorities was evident throughout the forum.

“Beyond Latinos, people of color, of all varieties and histories in this nation, are systematically driven from the electoral system, neglected in every aspect of public services, targeted in an unequal justice system, and vulnerable to economic and social exploitation at every turn,” Segura said during the pre-debate reception. “In California, we know we can do better. Tonight, I hope we hear some cogent arguments as to how best to proceed.”

In addition to Segura, many other staff and faculty members affiliated with the new Latino Policy and Politics Initiative at UCLA were on hand. Several students, including representatives from all three departments at the UCLA Luskin School of Public Affairs, were seated on stage behind the candidates.

The night’s first question was about deportation policy, and it was posed by UCLA medical student Marcela Zhou and recent UCLA graduate Erick Leyva, whose educations have been directly impacted by the federal Deferred Action for Childhood Arrival (DACA) program that the Trump administration rescinded late last year.

Gubernatorial front-runners Gavin Newsom and Antonio Villaraigosa both took advantage of the opportunity to publicly voice their support of DACA recipients and to stress agreement with California’s pro-immigrant stance in general, including its sanctuary state status. 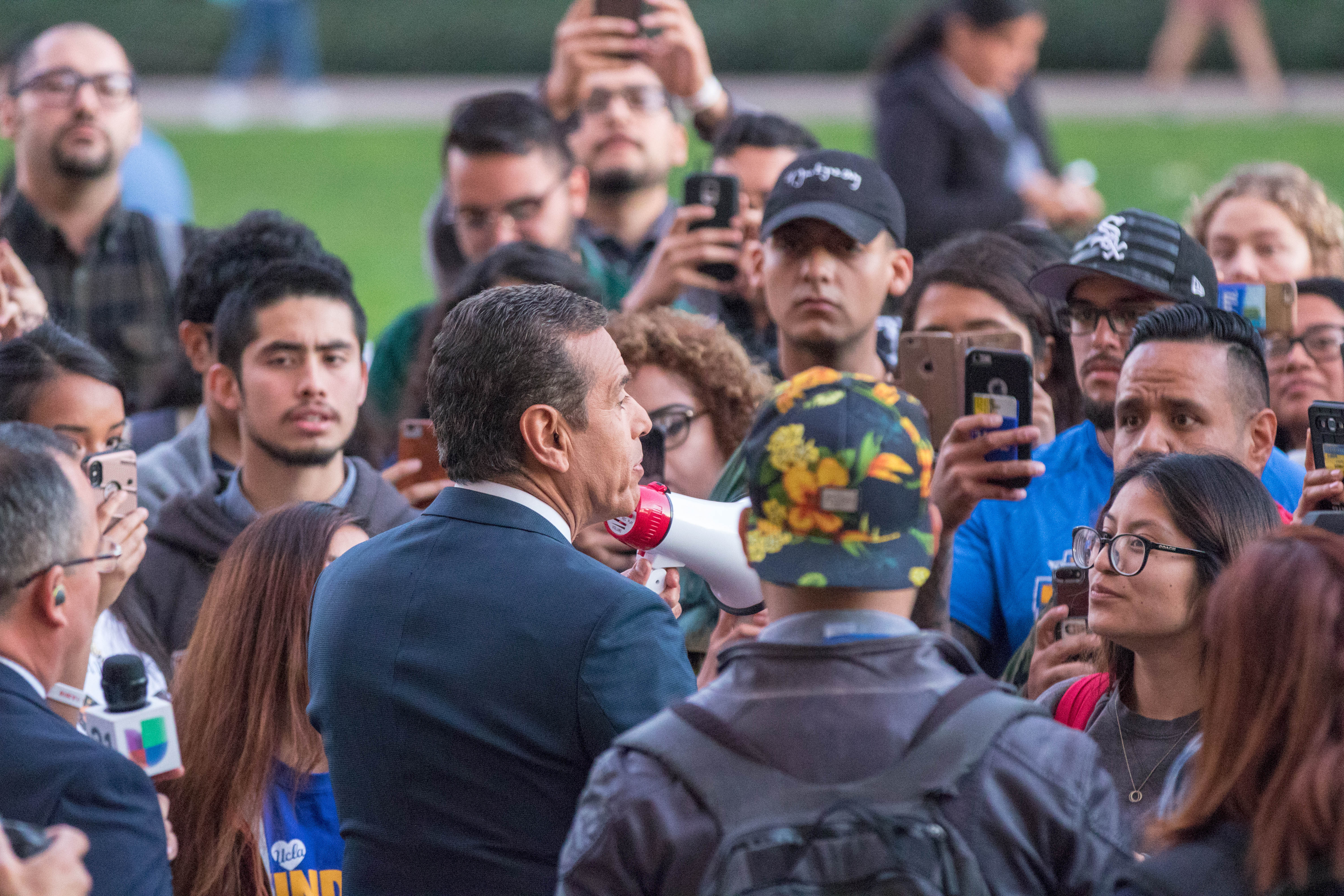 Former L.A. mayor Antonio Villaraigosa speaks with UCLA students protesting in support of the DACA program prior to the debate. 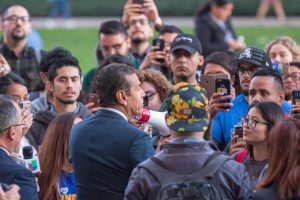 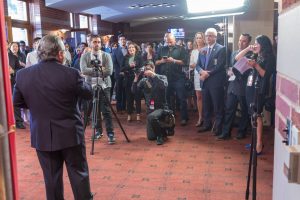 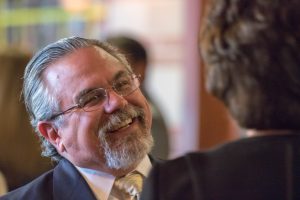 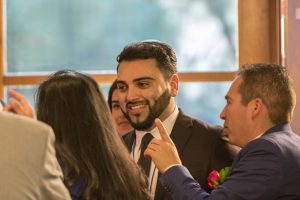 Forum guests were greeted at the forum’s entrance by about 50 UCLA students demonstrating outside Royce Hall, calling on the gubernatorial candidates to support protections for all undocumented individuals — not just DACA participants.

At one point, Villaraigosa waded into the crowd and declared his support for their viewpoint. As the former Los Angeles mayor walked up the steps to enter the building, the students chanted, “Say It Inside!” — an effort to prod Villaraigosa to go on the record in support of undocumented immigrants.

Soon into the debate, he did just that. “They’re saying, ‘no to deportations.’ And I agree. They said that we should say it in here, and we should say it. We are tired of deportations,” said Villaraigosa before invoking in Spanish the rallying cry among many pro-immigrant activists. “Aqui extamos y no nos vamos!”

The two Republican candidates at the forum, businessman John Cox and Assemblyman Travis Allen (R-Huntington Beach), both oppose California’s sanctuary status and said the state’s support of undocumented workers undermines the needs of U.S. citizens. Their statements often led to boos from the crowd, and Allen, in particular, generated loud objections from the audience when he expressed full support for the policies of President Donald Trump.

In strong contrast, the four Democrats often drew cheers with rebukes of Trump and his administration’s policies.

“California was built on the back of immigrants,” California Treasurer John Chiang, a Democrat, said. “Fundamentally we’re about dignity, decency and respect for all people. That is the heart of America, and we want to be that shining [city] to send a signal to President Trump that you’re dead wrong.”

To boost the numbers of Latinos pursuing higher education, Eastin suggested expansion of childcare and child development programs. She and other Democratic candidates also advocated for free college tuition.

Responding to a question about California farmers, Eastin called for a long-range water plan and better treatment of agricultural workers. Cox said he sympathized with Central Valley farmers and supports a seasonal worker program “to have people come in and get the work done.” Once crops are picked, however, he said the workers should go back to their countries.

Near the end of the forum, one of the most dramatic moments took place when moderator Ramos returned to the question of undocumented immigrants. He reminded the crowd of the two DACA recipients who had opened the night’s questioning.

“Would you deport them?” Ramos pointedly asked the candidates.

In response, Chiang, Newsom, Villaraigosa and Eastin all said no, and that they would work to protect them. Even Cox said no, though he qualified his response by calling for stronger border security.

Catcalls from the audience greeted Allen when his turn to answer came. “As the next governor of the state California,” he began, “I will follow immigration law …”

Ramos gestured to Zhou and Leyva seated behind him, and they moved to center stage. As Allen walked over and shook their hands, audience objections grew louder.

“Yes or no? Yes or no?” the crowd chanted after Allen dodged a direct answer by saying Republicans plan to include DACA protection as part of immigration reform.

Shouts from the crowd erupted. As the two young people shifted uncomfortably just inches away, Ramos asked again, “Would you deport them, Mr. Allen?”

“That’s not the job of the governor of the state of California,” Allen declared. “Our president is working on a deal right now to protect your status in exchange for border security and a comprehensive immigration plan …” 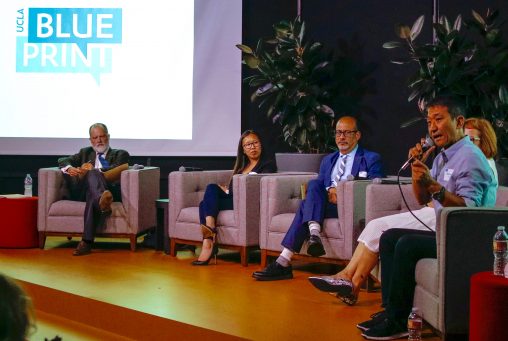 As the country reckons with President Donald Trump’s decision to end the Deferred Action for Childhood Arrivals program, expert panelists discussing immigration at a UCLA event Sept. 12, 2017, noted that now is the time for everyone who supports immigration reform to advocate for legislation that would protect those who are undocumented.

“I feel 100 percent protected at this point,” said Marcela Zhou, a UCLA medical student who is undocumented, as part of the discussion held at the Cross Campus gathering space in downtown Los Angeles. “But we really need the support from the community to continue fighting.”

Zhou was speaking as part of “Public Discussion: L.A. Leaders on Immigration and Civic Action,” which included immigration experts from UCLA and beyond, all trying to make sense of what transpired a week ago and what needs to be done now.

On Sept. 5, 2017, the Trump administration announced its decision to rescind DACA in six months, a move that would affect nearly 800,000 young adults across the country. These people, who are often called Dreamers, were typically brought to the United States as children, and have worked to gain access to higher education and a job, while maintaining a clean legal record (no felonies or major misdemeanors).

Abel Valenzuela: “Organizing at the street level is what I think is the next answer.”

Valenzuela, who is also a professor of Chicana and Chicano studies, and has authored numerous work on day labor and immigrant labor markets, lamented that it “took years to get [President Barack] Obama to finally change his mind” and create DACA. Rescinding the order is “not politics as usual in any way,” he said.

Durazo’s experience has spanned decades, working in the hotel employees and restaurant employees union back in 1983, and then as the vice president for UNITE HERE International Union. In 2003 she became national director of the Immigrant Workers’ Freedom Ride, a campaign to address immigration laws, and from 2006 to 2015 she was the first woman elected executive secretary-treasurer of the Los Angeles County Federation of Labor.

All that experience leads her to the belief that the public needs to examine the immigration issue beyond just the current administration.

Despite their concerns, the panelists implored the crowd to remain positive. The event comes on the heels of a push by UC system leadership to convince members of the House and Senate from California to get an immigration reform bill through Congress.

Yoon just returned from a 22-day vigil in front of the White House. There, he spoke to many non-immigrants. Yoon said he was hopeful because many were able to open up their minds on the issue.

He was part of the founding of the National Korean American Service and Education Consortium in 1994, with successful campaigns including the “Justice for Immigrants” Washington Post ad campaign that opposed anti-immigration legislation. Now, efforts must be focused on Congress to pass comprehensive immigration reform that protects those eligible for DACA.

“It’s their lives and future, and that future is in danger,” Yoon said. “This is a great opportunity to really pass the DREAM Act.”

Durazo called for business and education leaders to amplify the message of Dreamers and comprehensive immigration reform.

In the spring, UCLA Chancellor Gene Block formed an Immigration Advisory Council, on which Valenzuela serves, and the campus and UC system have supported immigrant students.

“There’s a lot we can do,” Valenzuela said. “Their history on our campus is real.” The council will continue to do what it can to mitigate fallout from federal immigration decisions, he added.

For the civically minded in the crowd, the panelists said there is no time like the present.

“Organizing at the street level is what I think is the next answer,” Valenzuela said.

“We’ve been on the defense for so long,” Yoon said. “Now we have something we want to push for.”

To change the narrative on DACA and immigration issues, Zhou said everyone can contribute, and that “organizing is huge.” Think about the terms you use when discussing these issues, she said.

“I am sort of the medical student people talk about positively in their narrative,” but what about field workers and others, she wondered.

Zhou, who was born in Mexicali, Baja California, Mexico, but to Chinese parents, moved to Calexico, California. when she was 12. Her story defies easy categorization — 100 percent Chinese, but a native Spanish speaker.

Zhou questioned why it was easy for her as someone who looks Asian to walk along checkpoints, even though she’s also from Mexico.

Durazo said she has been out in the community providing resources, including pamphlets detailing how to deal with Immigration and Customs Enforcement agents. She noted that anyone can do something, for example learning to help with citizenship tests. “Everyone here can be a volunteer in providing these services. The push is to not settle for anything less.”