Tag Archive for: David Geffen School of Medicine at UCLA 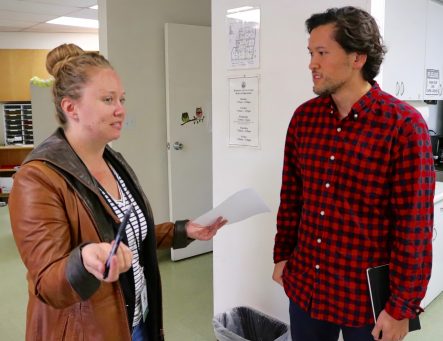 First-year UCLA medical student Matthew Hing, right, listens as social worker Katie Helgason, program manager at the St. Joseph Center in Venice, describes a typical day at the facility where she and others work to address the needs of the homeless. Photo by George Foulsham

Matthew Hing is a first-year medical student at UCLA, but on this April morning he’s a visitor in a nondescript building on Lincoln Boulevard in Venice — the St. Joseph Center, home of the Chronically Homeless Intervention Program.

Hing enters through a back door, weaving through a crowd of homeless people who gather each morning to take advantage of St. Joseph’s services. This isn’t your typical med school classroom, but Hing believes the experience will be a vital part of his training — adding more educational insight to his medical school curriculum.

Thanks to a partnership between the UCLA Luskin School of Public Affairs’ Department of Social Welfare and the David Geffen School of Medicine at UCLA, Hing and 19 other medical students are receiving a lesson in social work.

A month earlier, the students gathered in a classroom in the Public Affairs building for an orientation session arranged by Todd Franke, the chair of the Department of Social Welfare; Gerry Laviña MSW ’88, director of field education at UCLA Luskin; and Michelle Talley MSW ’98, a member of UCLA Luskin’s field education faculty and a licensed clinical social worker (LCSW).

“I think this is a fantastic opportunity,” Franke said as he greeted the students. “We hope this is a marvelous success.”

Laviña talked about how much he learned from similar experiences earlier in his career. “I learned so much from the doctors and nurses and social workers,” he said. “Literally, I would not be here today if I hadn’t had that experience.”

Talley told the students about having worked in child welfare, and how she spent time working with public health nurses on adoption cases. “It was very helpful and useful in my role as a social worker, understanding some of the medical issues that a child could be faced with,” she said. 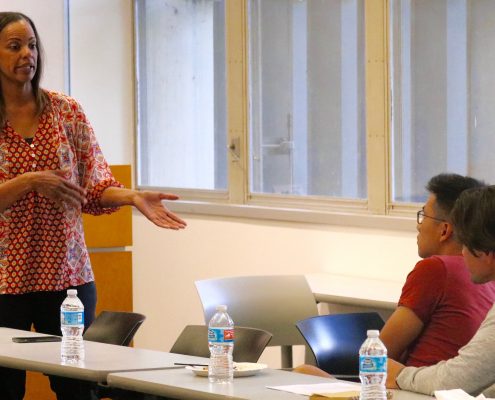 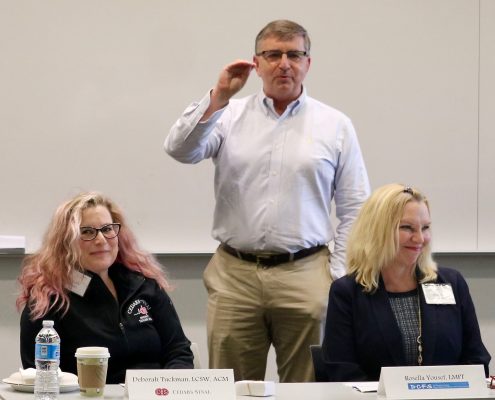 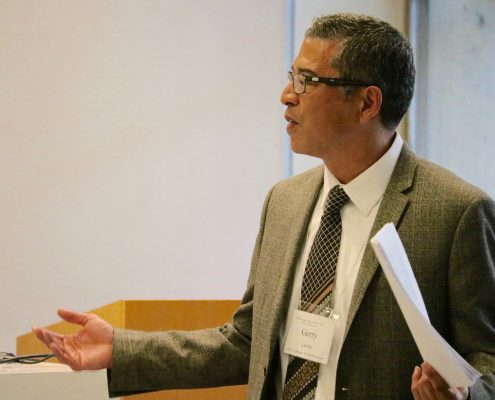 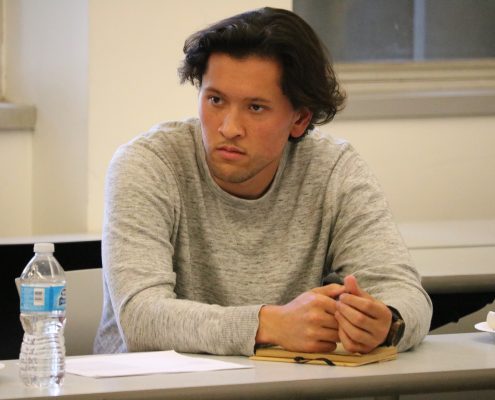 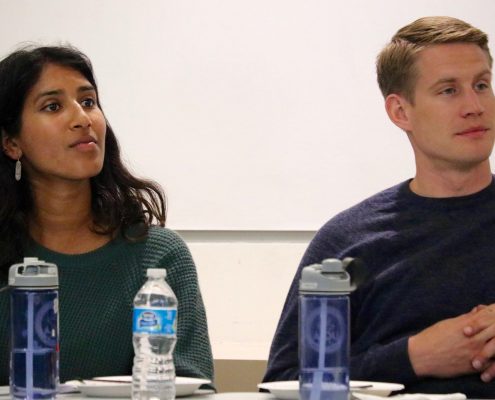 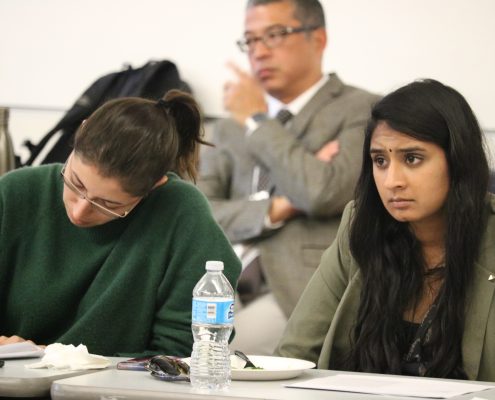 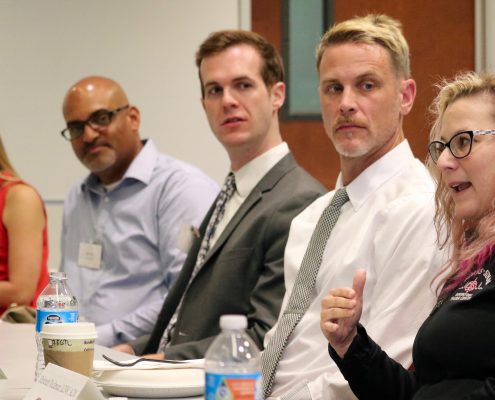 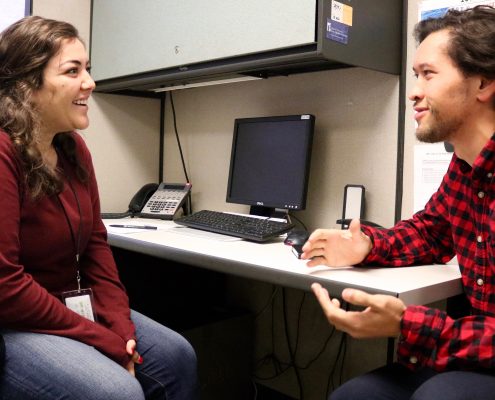 Hing’s day at the homeless center was the “shadowing” piece of the social work lesson. He spent a day observing and debriefing social workers and a psychiatrist, all of whom specialize in tending to the needs of the homeless.

“The psychiatrist, he saw three clients — all very different cases,” Hing said. “One was an intake case, the second time he had seen the client, so he was really getting a sense of what was going on — what had led to this individual becoming homeless, and how they were doing now.

“The second was much more stable — he’s been seen for several months — but there were new stresses in his life,” Hing said. “It was just a lot of things that a psychiatrist knew to ask that I never knew about.”

The third case involved a patient who was struggling with the anti-psychotic medication that she was taking, and how it was making her fall asleep. “So she was worried about her safety on the street,” he said. “This was something for me in a patient interaction that I would never think about, but you can learn from a social worker. Seeing those unique insights at work in this population — that’s what I got from shadowing.”

Hing shadowed those working with the homeless, and his fellow students had a variety of other experiences. One participated in a forensic interview on a child-abuse case — “an intense experience,” Hing said he heard later.

Hing’s trip to St. Joseph Center was arranged by Laviña, and the two have been the driving forces behind making the partnership a reality. After attending a conference about social medicine in October, Hing emailed a proposal for the program to members of the curriculum committee at the Geffen School. He and his colleagues, fellow medical students Amrita Ayer, Brian Dang, Lyolya Hovhannisyan and Samantha Mohammad, produced a potential syllabus, which led to a formal presentation to UCLA Luskin.

“Todd thought it was an excellent idea,” Hing said. “He wondered why it hadn’t already happened, and was excited about the possibilities.”

The concept resonated with Laviña, who sees it as a logical extension of what social welfare experts provide to Luskin’s master’s students.

“Social workers have always worked in multidisciplinary settings, so we strive for collaboration with physicians and all other disciplines,” Laviña said. “We were happy to work with Matt and his peers, along with our faculty and panelists, to bring very direct feedback as to how they can become doctors who work with their patients and families using cultural humility and truly seeking a holistic approach.”

The orientation session was the first part of the program. In addition to the introductions by Laviña, Franke and Talley, the session included a panel of seven social welfare experts: Rosella Youse, a manager with the Los Angeles County Department of Children and Family Services (DCFS); Kim Tran MSW ’11, a forensic interviewer with DCFS who is stationed at Harbor UCLA Medical Center; Deborah Tuckman MSW ’99, a social worker in the emergency department at Cedars-Sinai; Thomas Pier, LCSW at Simms/Mann UCLA Center for Integrative Oncology; Brian C. Wren, LCSW at Providence Health & Services; James Coomes MSW ’96, LCSW at the county department of mental health; and Kim Griffin-Esperon MSW ’98, LCSW with the Los Angeles Unified School District.

The experts shared stories about dealing with child abuse, testifying in court for child welfare and neglect cases, helping assist children with spina bifida and cancer, providing guidance on home health care and about coping with many other social issues doctors might encounter during their careers.

“You won’t know child welfare social work like we do,” Youse told the medical students. “But I don’t know the medical field like you do. So together we are really the ideal team.”

The program is also supported by those who work with the students in the Geffen School.

“Caring for patients takes a diverse team of experts,” said Sheila Naghshineh, chair of the doctoring program for first-year medical students. “Having a social worker on the team is often vital to providing high-quality, customized care for patients in both the outpatient and inpatient setting.”

It is important for health care providers to understand the role of social workers so that they can learn to work together as a team, Naghshineh said. “The social worker shadowing pilot program helps medical students experience first-hand how to effectively work with social workers, and understand how and when to utilize their services, resources and expertise to benefit patients,” she said.

Asked if he thinks social work should be a part of the medical students’ curriculum, Hing’s response was definitive: “Yes, yes, yes.”

“Ideally, this should be part of our curriculum,” said Hing, who was raised in a medical family — his mother is a social worker and his father is a physician. “I think it is important for us to witness the empathy that social workers bring forth for their patients, who are often from the most vulnerable, marginalized parts of our society. I’d love to make sure that all of my classmates have this opportunity to see the incredible work that is going on around this.”

Laviña said he was inspired to witness and experience the students’ openness to the feedback. “I am heartened to think about the type of doctors they will become — and how they will better serve our communities,” he said.