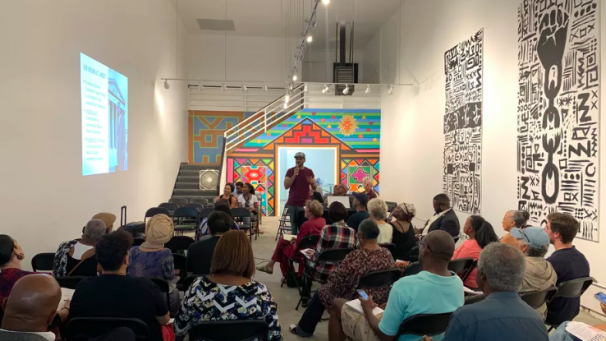 Paul Ong, research professor and director of the Center for Neighborhood Knowledge, expressed his concerns about upscaling and displacement in a recent Curbed article on the community’s response to planned redevelopment in South Los Angeles’ Crenshaw district. Residents worry that the expansion of the Baldwin Hills Crenshaw Mall will lead to higher housing costs, ultimately displacing low-income residents. Last year, Ong authored a study tracking economic progress in South Los Angeles over the past 50 years that found that 42 percent of renters in the region are “rent-burdened.” He predicted that the opening of the new Crenshaw Metro station will lead to a rise in housing costs in the area. “We certainly see that there are particular interests in developing that area that would lead to upscaling,” he said. The Crenshaw Subway Coalition, led by local community leaders, aims to inform residents about six major developments in the district and educate them about gentrification. 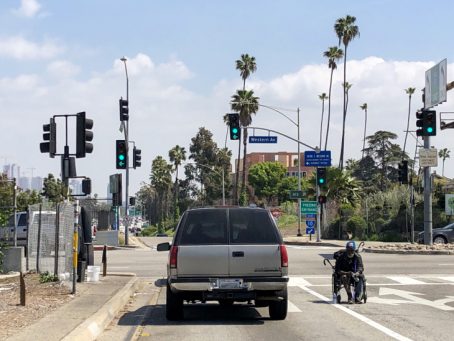 Paavo Monkkonen, associate professor of urban planning and public policy,  spoke to LAist about the root causes of homelessness in Los Angeles. Monkkonen pointed to rising housing costs exceeding income as the main contributor to homelessness. “People talk about [housing] like it’s a game of musical chairs, but I don’t think that’s really the right metaphor. Income differentials don’t matter in a game of musical chairs, but they do in this one,” Monkkonen said. Restrictive land-use policies have limited the amount of new housing available to accommodate a growing population, he said. Housing costs have increased because of a lack of supply of places to live and more high-income jobs that lead to gentrification and displacement in less affluent neighborhoods. “We’re building much less housing than we have at every other point in our history, in at least the last century or so,” he said. 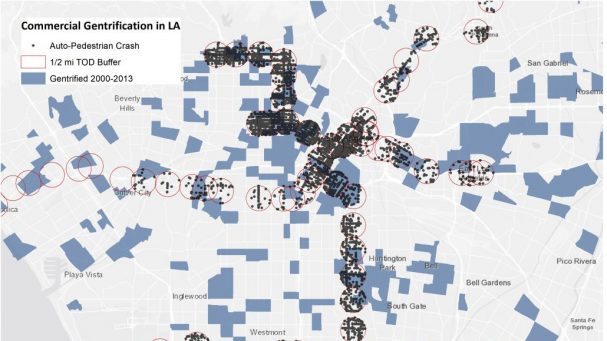 Anastasia Loukaitou-Sideris, professor of urban planning and associate provost for academic planning at UCLA; Silvia R. González, a doctoral student and researcher at the Center for Neighborhood Knowledge; and Karen Chapple of UC Berkeley conducted a study to analyze the relationship between gentrification, traffic safety and transit-oriented development (TOD). The study, “Transit Neighborhoods, Commercial, Gentrification, and Traffic Crashes: Exploring the Linkages in Los Angeles and the Bay Area,” analyzed the number of collisions near rail stations in L.A. County and the San Francisco Bay Area in both gentrified and non-gentrified areas. The authors had hypothesized that residential and/or commercial gentrification leads to more traffic collision due to increased traffic and increased use of two or more modes of transportation, but the study did not find a significant relationship between residential gentrification and traffic safety in Los Angeles County or the Bay Area. It did, however, find that pedestrians and cyclists are at a higher risk of collision around commercially gentrified stations. Loukaitou-Sideris, González and Chapple suggest that policymakers and urban planners pay special attention to commercially gentrified areas. They conclude that “complete street strategies, traffic calming measures, protected bike lanes, controlled intersections, and other traffic safety improvements and regulations can help respond to this threat” of traffic collisions around commercially gentrified TOD stations. The study is part of an ongoing research partnership with the Urban Displacement Project, a research and action initiative at UC Berkeley. 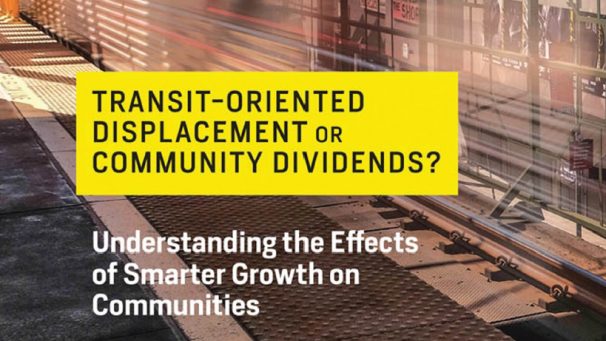 A new book co-authored by Anastasia Loukaitou-Sideris, professor of urban planning at UCLA Luskin, takes a novel and critical look at the effects of compact development around urban transit systems. “Transit-Oriented Displacement or Community Dividends? Understanding the Effects of Smarter Growth on Communities” (MIT Press), is the work of Loukaitou-Sideris and Karen Chapple, professor of city and regional planning at UC Berkeley, who studied the “realities on the ground” surrounding the question of who wins and who loses with the creation of new transit accessibility. “Gentrification — and the often ensuing displacement — are not stable but dynamic and changing processes that are not often well captured by the collection of census data that occurs every five or 10 years,” Loukaitou-Sideris said. “We learned a lot about gentrification in specific neighborhoods — not readily obvious from census data — from interviews with community groups and from multiple visits to these neighborhoods,” she said. The authors note that, although gentrification does entail increasing land rents and housing prices, it is also about “losing the sense of place in a neighborhood that you grew up in and have lived for many years, that now looks different and serves different socio-demographic groups.” Loukaitou-Sideris said the intention of the book is not to “send the message that we need to stop building TODs and higher-density housing around transit stops, where appropriate. But we want to send a notice to planners and policymakers that they also need to enact or continue anti-displacement policies in these areas to protect existing residents from displacement.” 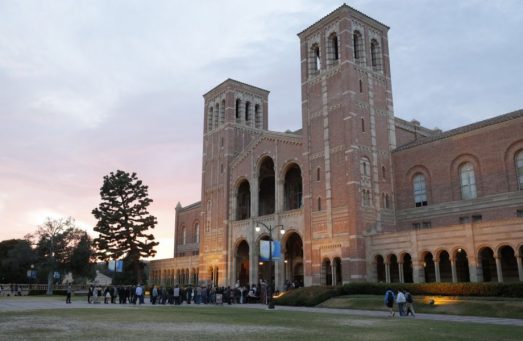 Ananya Roy, director of the Institute on Inequality and Democracy at UCLA Luskin, spoke to Next City about the institute’s efforts to link the university’s research and resources with social movements and racial justice activism. “We call this decolonizing the university. Turning the university inside out,” said Roy, a professor of urban planning and social welfare. Roy said the institute is not a movement itself but stands in solidarity with community residents and organizers. “They’re telling us where the gaps in knowledge are and how our research should address those gaps,” Roy said. The article mentioned the Housing Justice in Unequal Cities network launched by the institute and the Activist-in-Residence program, which creates space for activists, artists and public intellectuals.