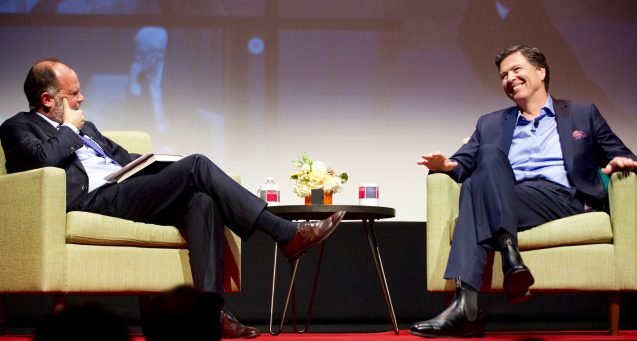 UCLA Luskin's Jim Newton, left, and former FBI Director James Comey during the Conversation with James Comey event held at the Aratani Theatre on May 24, 2018. Photo courtesy of the Los Angeles Library

To impeach or not to impeach? That was one of the questions put to former FBI Director James Comey by UCLA Luskin Public Policy lecturer Jim Newton during Comey’s sold-out appearance at the Aratani Theatre in downtown Los Angeles on May 24, 2018.

Comey’s answer? Impeaching President Donald Trump is not a solution to the current political divide in the United States; instead, it would likely exacerbate the split.

“In a way, [impeachment] would let all of us off the hook,” Comey said. “And not just off the hook, but drive a dysfunction and a divide deep into the fabric of America, leaving 40 percent — it’s probably less than that — 30 percent of voters believing there’d been a coup.” Comey said America needs a reset, “and that’s only going to come, I believe, if the American people, not just those who voted for Hillary Clinton, but so many others who didn’t vote, get off the couch … and vote your values in this country.”

Comey, a former Republican who now says he is unaffiliated politically, continued, “Vote for people who reflect a commitment to the rule of law, equal protection of the laws, and the truth. That will be a moment of clarity and inflection in this country that will not allow the angry wing to say, ‘It was stolen from us!’ No, it wasn’t. The American people stood up and said, ‘No more!’”

Comey’s appearance was part of the Los Angeles Library’s ALOUD series, and marked his first visit to Los Angeles since he was fired by Trump while speaking with FBI agents here a year ago. Since being removed from office, Comey has made appearances all over the country promoting his book, “A Higher Loyalty: Truth, Lies, and Leadership,” currently the No. 3 best-seller on the New York Times nonfiction list.

Newton, who is also editor of UCLA’s Blueprint magazine, asked Comey to explain the meaning of the book’s title. Values, a recurring theme in his remarks, came up again.

“It’s to try to convey the sense that the best leaders I ever worked for, and learned from a lot, were people who were always able to look above the angry and the political and the financial to the things that are above that,” Comey said. “When they’re making the hard decisions, they always ask, ‘What are the values of this institution? What’s the constitution? What’s the law? What’s the long run?’ And they’re able to, by focusing on those things, by being above the loyalty to a person or a tribe, make better decisions.”

Comey expressed concern that political battles over guns, immigration or taxes are causing citizens to lose sight of the core values that Americans share. “It should be the only thing we are truly loyal to. Which is the rule of law, freedom of religion, freedom of expression. The truth is the only loyalty that matters,” he said.

Comey’s controversial role in the 2016 presidential election was one of the subjects covered by Newton, who questioned whether it was appropriate for the FBI director — and not the attorney general — to announce in July of an election year that no charges would be filed against Clinton following the agency’s criminal investigation into her emails. At a pre-election press conference to announce that decision, Comey said that the FBI had found that Clinton and her staff had been “extremely careless in their handling of very sensitive, highly classified information.”

Comey told Newton, “I’m not certain that I arrived at the right answer. I think I did, but I can see reasonable people seeing it differently. … I thought the least bad alternative was to make an announcement … and that would be the thing best-calculated to reduce the damage to the institutions of justice, and increase faith and confidence that the result was done in a decent and independent way.

“I know a lot of people characterize this as me criticizing Hillary Clinton,” he added. “That’s not how I thought about it. I felt I was giving the American people an honest description of what we found. … But I should have said really sloppy (instead of extremely careless).”

Among the many other issues that were discussed, Comey:

The School of Public Affairs congratulates Professor Amy Zegart on her recent appointment to the FBI Intelligence Analysts Association (IAA) external advisory board. In this role, she will provide advice and assistance to the FBI IAA to advance the interests of the FBI’s intelligence analysts in an effort to increase our national security.

Professor Zegart has been featured in the National Journal as one of the ten most influential experts in intelligence reform. In addition to her role as an associate professor at UCLA’s School of Public Affairs, she is also a research fellow at the Hoover Institution, and a fellow at UCLA’s Burkle Center of International Relations. In 1993, Professor Zegart served on the Clinton administration’s National Security Council staff. Before her academic career, she spent several years as a management consultant at McKinsey & Company.

The FBI IAA is an independent professional association dedicated to improving the professional development of the FBI’s 2,500 intelligence analysts throughout the FBI’s fifty-six field offices, FBI headquarters, and its offices abroad.