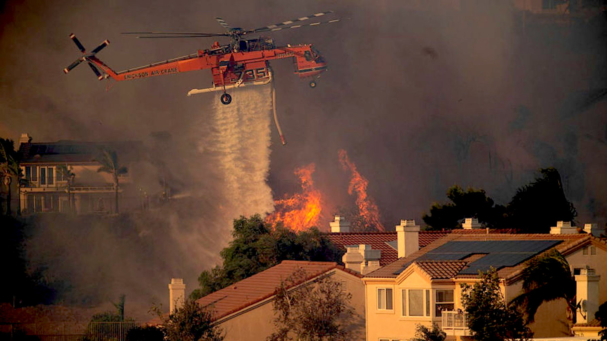 Kian Goh, assistant professor of urban planning, wrote an article for The Nation about California’s raging wildfires, the deadly stakes of global warming and a key aspect of the crisis that has not captured headlines: “Yes, climate change intensifies the fires — but the ways in which we plan and develop our cities makes them even more destructive,” Goh argued. Private homeownership, a key part of the American Dream for generations, is an ideal that has blinded us to safer and more sustainable priorities, she wrote. She called for new urban designs that protect whole communities, including their most vulnerable members, rather than individual lots. “Given the scope and scale of the climate crisis, it is shocking that we are being presented with so few serious, comprehensive alternatives for how to live,” Goh wrote. “We need another kind of escape route — away from our ideologies of ownership and property, and toward more collective, healthy and just cities.” 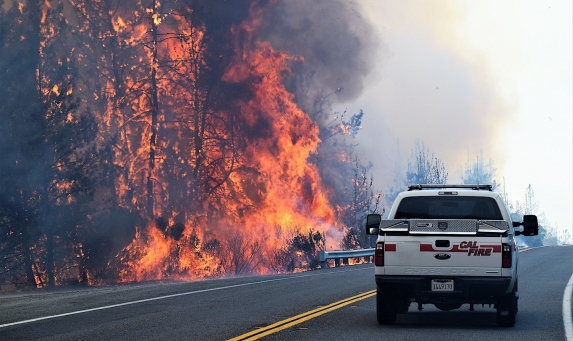 For the next year, the Institute of Transportation Studies at UCLA Luskin will benefit from the research and expertise of a climate adaptation specialist.

Mikhail Chester, an associate professor of civil engineering at Arizona State University, has joined the institute as a visiting scholar, focusing his yearlong appointment on studying infrastructure vulnerabilities in a changing environment.

Specifically, Chester will study how roads are vulnerable to wildfires.

“Roads are not designed for the worsening conditions of climate change,” Chester said.

The old, conventional thinking about this problem was to map the hazards: Where will it be hotter? Where will it flood? Where do the roads and bridges intersect?

“Infrastructure are not fragile, brittle things. They’re tough,” he said. “What I’ve been trying to do is shine a light on how we can think more critically about what ‘vulnerability’ means.” 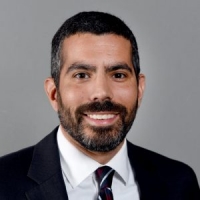 Last year, California experienced its largest and deadliest wildfire season. And despite a wet winter, the state is again braced for an active wildfire season spurred by rising heat and driven by winds.

In recent years, Californians have seen wildfires burn near, and eventually cross, freeways.

And yet, “for the most part, the asphalt is OK,” Chester said. “It turns out the biggest danger to roads is after the wildfire.”

‘As infrastructure professionals ― planners and engineers ― if we can’t recognize issues and make changes, we’re going to be irrelevant.’

A fire will burn up vegetation, creating ground debris. It will also shift the soil chemistry, making it less likely to absorb water. The two can combine to disastrous effects following heavy rains. In what has become a routine post-wildfire concern, rocks, mud and other debris flow down hillsides left barren from recent fires and wreak havoc on roadways and other infrastructure.

While at UCLA, Chester ― who hopes to engage with professionals across multiple campus disciplines, such as urban planning, engineering, climate science and public health ― plans to connect the state’s fire forecasts and transportation infrastructure with various environmental indicators, like terrain, vegetation and soil characteristics.

“When you connect the dots and put all these things together, ideally, you come up with a better way of characterizing vulnerability,” Chester said.

Once the risks are identified, local officials and policymakers can draft an array of responses ranging from strengthening infrastructure and managing forests to detouring traffic away from vulnerable roadways.

A civil engineer with a public policy background, Chester is a leading researcher on the interface between infrastructure and urbanization. His work on the environmental impact of transportation looks beyond tailpipe emissions to assess the role of roads, fuel supply chains and manufacturing.

In Arizona, with high temperatures and flash flooding, he has explored climate adaptation and resilience. He is also currently involved in an interdisciplinary study with UCLA on the sun and heat exposure a person experiences in their day-to-day travels.

All of this work, as Chester explains, is the groundwork for a larger question: How will we manage infrastructure for the next 100 years?

The world is rapidly changing and new technology constantly emerging. People will continue to demand more from an infrastructure that is rigid and not designed to quickly and efficiently accommodate changes such as, for example, autonomous vehicles.

“I think we are woefully unprepared for how we manage infrastructure or how we think about the problem,” said Chester, whose work aims to reimagine these concepts for the 21st century and beyond.

“We are so stuck with the status quo that I’m worried whether or not we can make substantive change fast enough. I think as infrastructure professionals ― planners and engineers ― if we can’t recognize issues and make changes, we’re going to be irrelevant.” 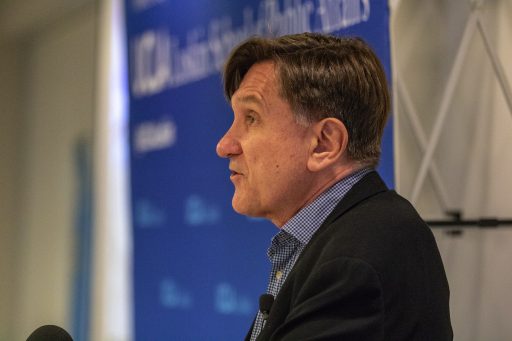 Edward Struzik led a discussion about the current state of wildfire suppression and why people should instead focus on being "fire managers." Photo by Aaron Julian

Last December, Los Angeles and the greater Southern California area faced many major fire events, including the Skirball and Thomas fires, that caused tens of millions of dollars of damage to hundreds of thousands of acres and hundreds of buildings. Severe fire incidents such as these leave an impression on some people that all wildfires can be nothing but catastrophic.

But the rich history of benefits, losses, debates, policy initiatives and research demonstrate that wildfires are so much more than what meets the eye.

Wildfire was the topic of discussion on April 19, 2018, at UCLA Luskin. Fronting this event was Edward Struzik, a fellow at the Institute for Energy and Environmental Policy at Queen’s University in Kingston, Canada, and author of the book, “Firestorm: How Wildfire Will Shape Our Future.” Struzik detailed the history, science and approaches taken to control wildfires over the past couple of centuries. He also pressed for a hybrid approach to wildfires that moves us away from the longstanding policy of fire suppression toward fire management.

“Fire rejuvenates forests by removing disease-ridden plants and harmful insects from forest ecosystems, and yet fire continues to be demonized. … The big problem is that we have not been able to figure out how to live with fire,” Struzik said.

Wildfire incidents have become increasingly powerful and widespread, he said, and in turn have become increasingly difficult to contain. This amplifying issue can be attributed to factors such as global climate change, invasive trees and shrubs, arctic sea ice changes, and, especially, human behavior. As the human population increases, communities grow and spread. As more people spend more time in forests, fire risks increase dramatically.

“Human-started wildfires have accounted for 84 percent of total wildfires, and tripled the length of the fire season,” Struzik asserted. “The problem we can say is not fire, but people.”

He added that preparation is crucial in communities that are at risk of wildfire, so that people understand that we are unable to stop all fires. He argued for improved early warning processes and clearer evacuation protocols. Struzik also proposed doing more controlled burns and allowing remote wildfires to run their course to safely deplete the fuel for these fires and enhance forest ecosystems.

The future is projected to become increasingly dangerous if fire suppression remains dominant. As arctic sea ice continues to diminish, Santa Ana winds will become dryer. Struzik says that our best option is to adapt and embrace “good fire”; otherwise, the “bad and the ugly fires” will prevail.

Following the lecture, a panel of experts expanded on the subject matter.

Doug Bevington, director of the Environment Now Forest Program at the Leonardo DiCaprio Foundation and moderator of the panel, said, “The central challenge we face is to find policies that simultaneously take climate change seriously and take the natural role of large wildfires seriously … while enabling Californians to safely coexist with wildfire as an inevitable part of life in our state.”

Chief Ralph Terrazas of the Los Angeles Fire Department detailed the hard work and strain that California fire departments have experienced in recent years, including last December when multiple fires raged at once. Terrazas emphasized the importance of larger policy reforms to reduce fire incidents and stretch fire combat resources when homes and lives are endangered.

“It is about changing the way we think when we live in these environments,” said Beth Burnham, a founder and current member of the North Topanga Safe Fire Council. Burnham argued that when people live in fire-risk areas like many parts of Southern California, they must make fire readiness and preparation a priority.

Alex Hall, a professor in the Department of Atmospheric and Oceanic Sciences and director of the Center for Climate Science at UCLA, drew on his work in climate science in adding his perspective. “In California, there is this tremendous sensitivity of fire to climate and weather. Because climate and weather are changing, that means fire is also changing,” he said.

When the conversation was opened to the crowd, topics included technical inquiries from workers in water management as well as personal anecdotes about safety in communities that have previously been impacted by fire incidents. The panel reiterated the need to be prepared and have a plan for fire incidents, but attendees were also urged to work at the community level to promote change on a wider scale.

The event was organized by the Luskin Center for Innovation as part of the UCLA Luskin Innovator Series.

Click or swipe to view a gallery of photos from the event: 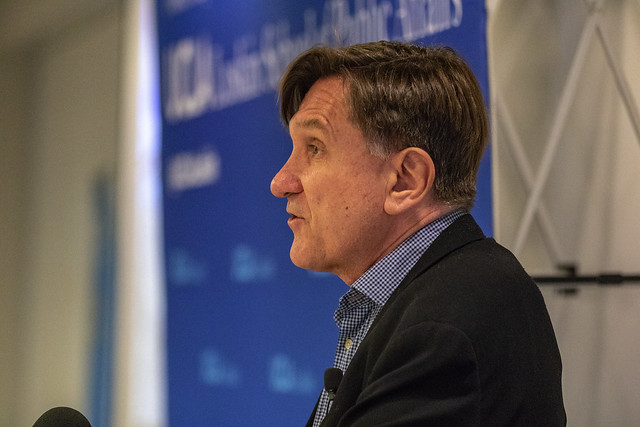