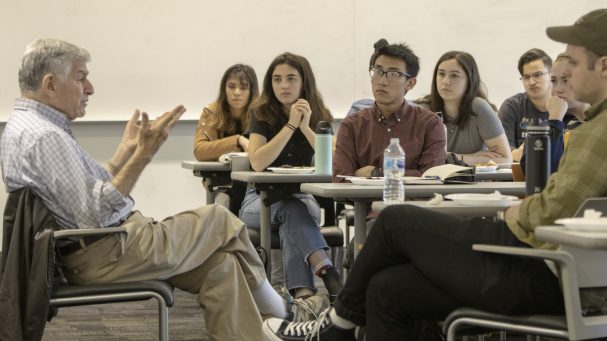 Former Massachusetts Gov. Michael Dukakis sat down with 30 public affairs undergraduate students to talk about the 2020 election and the importance of politics at a Learn-at-Lunch gathering on Monday, Jan. 28, 2019. Dukakis, the 1988 Democratic presidential candidate, began the roundtable discussion by crediting his third-grade teacher for inspiring him to enter politics when he ran for class president. Ever since, Dukakis has been involved in politics at the local, state and national level. In the 2020 presidential campaign, Dukakis said, Democrats must adopt what he called the 50-state strategy. The system must be responsive to the people it is serving, he said, and candidates must engage with voters in every state. “If you neglect a place, if you disparage people, if you don’t spend time with them, don’t be surprised if they turn somewhere else,” he said. A visiting professor of public policy this quarter, Dukakis is teaching both graduate and undergraduate courses. His class on California policy issues is part of the coursework for the new undergraduate major in public affairs. At the lunch, Dukakis wholeheartedly encouraged every student in the room to run for office or become involved in politics. “There is nothing more fulfilling or satisfying than being a professional where you can make a difference in the lives of people,” he said. — Myrka Vega