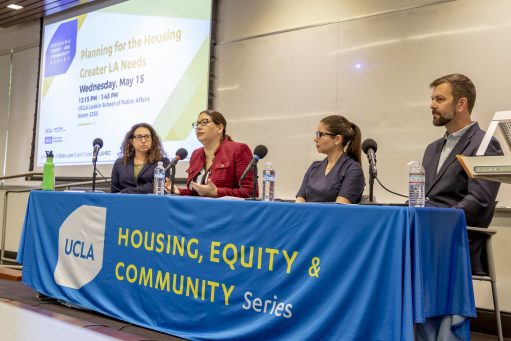 “Let’s get ready to … RHNA!” That was the rallying cry from UCLA Luskin Associate Professor Paavo Monkkonen during a recent panel discussion on Los Angeles’ housing needs with policy experts familiar with the state’s Regional Housing Needs Assessment (RHNA) process.

California’s 1967 housing element law — and the RHNA process — is an underemphasized aspect of state policy that matters just as much today as it did half a century ago, the panelists said.

Held May 15, 2019, “Planning for the Housing That Greater L.A. Needs” was the third and final installment for the year in the Housing, Equity and Community Series, a partnership between the Lewis Center for Regional Policy Studies at UCLA Luskin and the UCLA Ziman Center for Real Estate.

The event was moderated by Monkkonen, associate professor of urban planning and public policy. Providing the state’s perspective was Melinda Coy, senior policy specialist with the California Department of Housing and Community Development. Providing the regional view was Ma’Ayn Johnson MA UP ’05, who is a senior housing and land use planner at the Southern California Association of Governments (SCAG). Representing municipalities was Diana Varat JD/MA UP ’08, who works at Richards, Watson & Gershon, a firm that specializes in public law services.

California’s housing law seeks to ensure that cities zone for enough housing to accommodate population growth. In the RHNA process, state agencies project the population growth of each region. Then, metropolitan planning organizations like SCAG allocate a number of housing units to individual cities based on the projected growth. Cities are then required to demonstrate that they have enough capacity to accommodate these additional housing units, but RHNA does not force cities to build those units. Enforcement is spotty and construction often lags, resulting in housing shortages in many areas.

Recent state legislative actions have sought to reform the RHNA process, with a particular eye on equity. These and other issues related to the RHNA process are detailed in a newly released Lewis Center brief.

Gov. Gavin Newsom recently vowed to enforce RHNA targets more strictly, and his office has gone as far as initiating lawsuits against cities that are not meeting their targets, including Huntington Beach.

The complexity of regional governance over the 191 cities and six counties represented by SCAG was emphasized by Johnson. She also cited the importance of having a social justice and equity perspective when RHNA targets are allocated to individual cities so that racial and low-income housing segregation is avoided. She also mentioned that RHNA targets will likely increase to reflect unmet need, not just projected growth.

As a contract attorney working on housing compliance with various California cities, Varat characterized the law as requiring cities to “collect research and ignore it.”

Varat pointed out that identifying sites for affordable housing is a burdensome task for cities. And because it is not coupled with a requirement that those sites actually be developed as affordable housing units, the effort is often moot.

Coy described the housing element law as an effort to create a public safety net for what is otherwise an unprotected essential need. Varat, however, countered that the state’s effort to dictate city policy is based on a presumption that cities hold the power to develop new housing — in most cases, developers actually hold that power.

Another tension between local autonomy and regional/state authority involves existing affordable housing units. Varat criticized the housing element’s emphasis on new units, rather than preservation of existing affordable units. Coy acknowledged this shortcoming, saying that individual RHNA targets are supposed to include existing units, but they seldom do.

One lesson was clear — participation matters. Johnson informed the audience that meetings of SCAG are held monthly and are available by webcast. Both Coy and Varat underscored the importance of planning education and community engagement, and they see promise that the upcoming round of RHNA targets will better address previous gaps.

View a Flickr album of photos from the event. 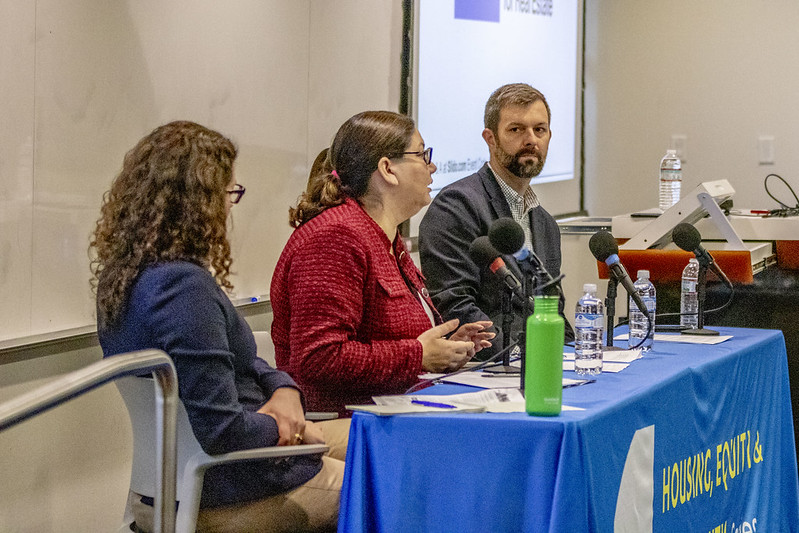