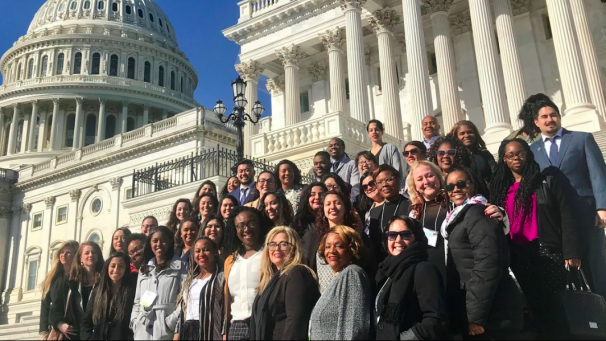 As awardees of the Council on Social Work Education’s (CSWE) master’s Minority Fellowship Program (MFP), UCLA Luskin MSW candidates Michelé Jones, Desiree Lopez and Jennifer Grijalva traveled this past March to Washington, D.C., where they gained valuable experience in policy and advocacy. The program aims to reduce health disparities and improve behavioral health care outcomes for racially and ethnically diverse populations by increasing the number of culturally competent master’s-level behavioral health professionals serving racial/ethnic minority populations. Recipients of the one-year fellowship receive specialized training, a monetary stipend and other professional development support. “The MFP program has provided me with professional development and access to mental health practitioners of color, which have been invaluable to my second year of social work education,” explained recipient Desiree Lopez. The 41 fellows gathered in Alexandria, Virginia, for the annual spring training and spent a morning on Capitol Hill, where they educated Congressional staff members about the importance of the MFP program. Grijalva described the spring conference as “a space filled with MSW students of color who were passionate about social justice issues around the country,” an experience that was “inspirational and empowering.” Jones was excited to use her skills as an advocate and gain a better understanding of policy during the training. “I was able to discuss the importance of having more mental health professionals of color in the field with members of the Senate in my own district. I left the training in D.C. extremely empowered and more prepared to begin my career,” she said.

Jennifer Ferro, president of KCRW talked about the role of public media in social progress. Photo by Todd Cheney

Jennifer Ferro was still a UCLA undergrad in the early 1990s when she landed an internship at KCRW, the public radio station in nearby Santa Monica.

“Jennifer had an internship that turned into a job,” noted Sarah Burtner, a second-year student in public policy at UCLA Luskin who helped introduce Ferro to a crowd of about 75 people, mostly students, who gathered Jan. 18, 2018, to hear Ferro’s Senior Fellows Speakers Series presentation. Ferro has been with KCRW for 25 years now.

“Millennials, on average, change jobs every three to five years, so this type of longevity is truly lost on us,” said Burtner with a smile.

Today, KCRW is the flagship public radio outlet in Southern California and Ferro is the station’s president. She is also an active participant in the UCLA Luskin Senior Fellows program, serving as a mentor for current students such as Burtner and Andres Carrasquillo of urban planning.

“We were drawn to Jennifer’s work at KCRW to help us understand how we might use the tools from the field of communication in thoughtful, engaging ways to help the public navigate the complexities of our fields,” Carrasquillo told the audience in the California Room at the UCLA Faculty Center. 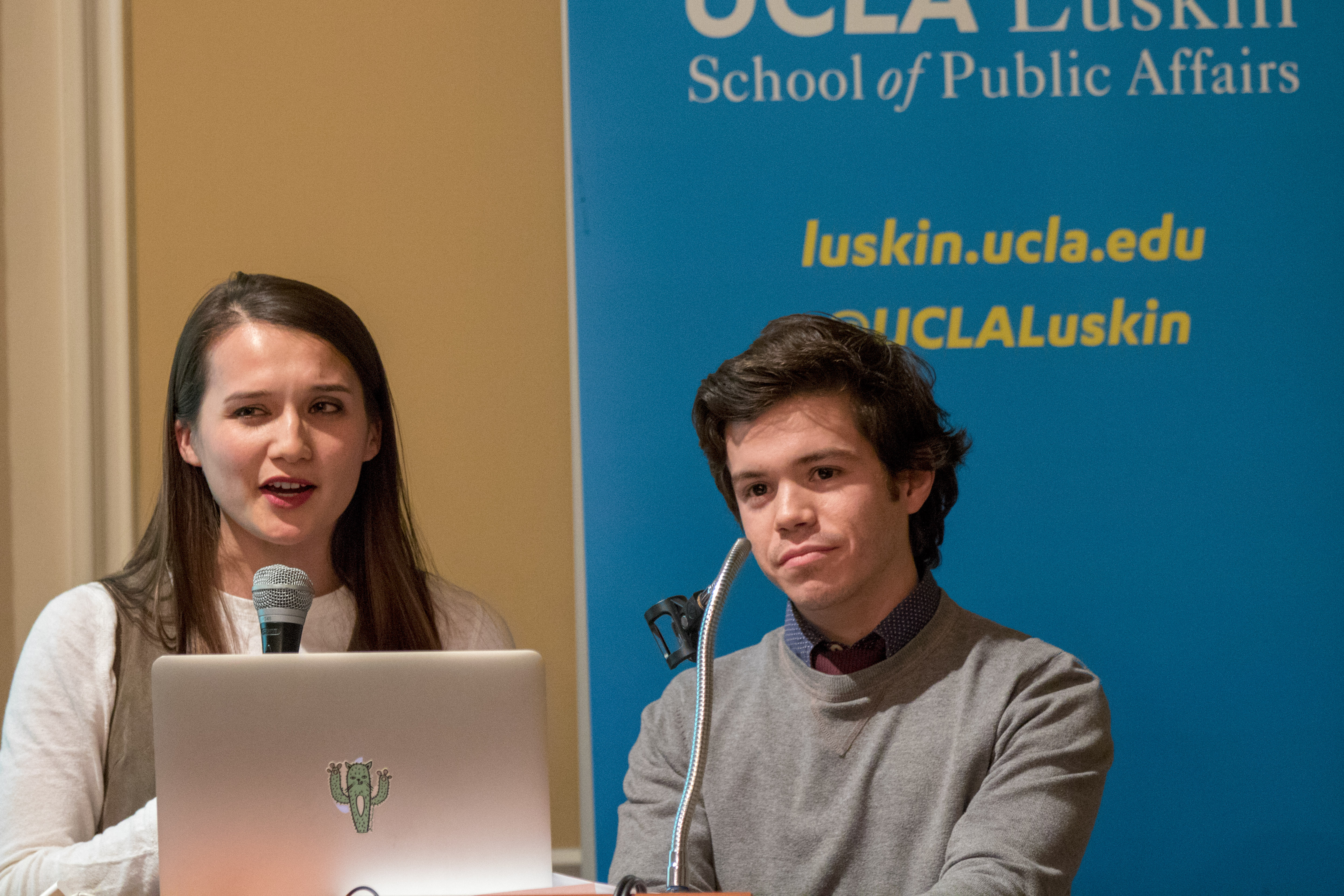 “At KCRW and in public media, we do very high quality work. And I do think it matters that when your goal and your mission is to serve people and not to get the largest audience,” Ferro said. “It means that you attract people with integrity and talk to people who care about integrity.”

She leads a radio outlet that is among the nation’s largest, best-known and most prolific, producing more than 100 hours of public interest and music programming each week. Her station offers hard news reporting as well as feature coverage of trendsetters in fields such as food, art, Hollywood or culture.

“Most of all,” Ferro said, “we believe in disseminating truthful information — which seems like something that we would not even need to talk about, until recently.”

Ferro tailored her presentation in part to the policy interests of her audience, most of whom were from the UCLA Luskin School of Public Affairs. She noted, for example, that many people have the mistaken perception that public radio exists mostly on money doled out to stations by the federal government.

In reality, just 6 percent of the station’s budget comes via taxpayers. “KCRW receives close to half of its $20-million budget annually from individuals who decide, voluntarily, to support it,” she said. In all, about 55,000 people donate to the cause. The remaining funding “comes from sponsorship, or what we call underwriting,” Ferro explained.

She and her colleagues try to use those funds wisely, Ferro said, covering stories in ways that will enlighten listeners and broaden their perspectives.

Noting the overriding sense of political division in the country of late, Ferro played a couple of audio clips from public radio programs that tried to bridge the divide between left and right by including voices from both sides on controversial topics.

In one piece that aired prior to the 2016 presidential election, a woman who supported Donald Trump speaks of her beliefs, including the idea that radical Islamists had been infiltrating the country in large numbers with the intent of doing harm to Americans. An interviewer points out that white men have been responsible for the vast majority of terrorist violence in this country, but the woman refuses to believe him.

“If you are like me, you presume that people who listen to public radio are rational and reasonable — kind, even,” she said. “Of all the media consumers, public radio people would be like Canada, you know, tolerant and nice.”

Yet, after that interview aired, the woman who expressed her conservative views on air was flooded with hateful emails and tweets, including many that were vile — even death threats.

“One of the things I hear all of the time is that we just need to listen more to each other,” Ferro told the crowd. But when people with opposing views do try to communicate, “sometimes I feel that what we really want is to wait for them to stop talking so that we can then persuade them to think the way that we think.

“It comes from this notion, this concept, that ‘I’m right, and you’re wrong.’ But that’s what the other person is thinking about you too.”

As a Senior Fellow at UCLA Luskin, Ferro engages with students who benefit directly from her experience and efforts to expand their worldviews. She and other participants in the mentorship program provide other benefits too.

VC Powe, who organized Ferro’s talk as part of her role as director of career services at UCLA Luskin, generated a buzz among the crowd when she told them of a new donation by Edmund J. Cain, vice president of grant donations for the Conrad N. Hilton Foundation, that will provide $5,000 stipends to UCLA Luskin students who land summer internships that would otherwise be unpaid. The catch? The stipends can only go to students whose internships are somehow connected to a senior fellow.

That won’t be a problem at KCRW, which still offers internships like the one that first got Ferro her foot in the door there. Now, as station president, she continues to delight in the opportunity that public media provides for open, honest communication.

“We let people tell their own stories, in their own voices,” Ferro said, while urging that it’s important that all voices be heard. “Are we going to allow ourselves to hear things that we don’t agree with, that we think are absolutely wrong, that we find personally repulsive?”

She continued, “I think there’s a better goal in all of this, and it’s the goal of exercising our humanity. You should go and meet your neighbors. You should talk to people about anything besides politics,” Ferro said. “You should try to like people in spite of who they voted for.”