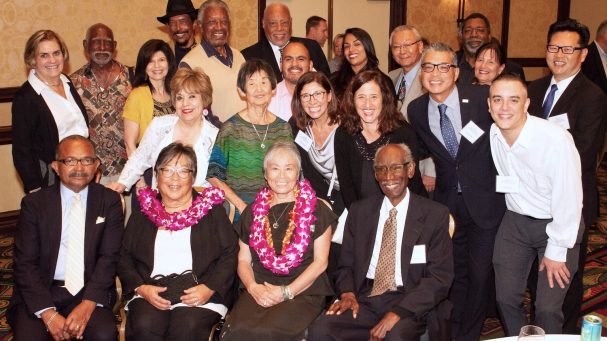 Four UCLA Luskin alumni were among six individuals inducted into the California Social Work Hall of Distinction in fall 2018. Bill Coggins MSW ’55, Kathleen Kubota MSW ’82,  John Oliver MSW ’64 and Yasuko Sakamoto MSW ’83 were honored at a ceremony on Oct. 7, 2018. They were joined by inductees June Simmons, who received an MSW from USC in 1970, and Diane Takvorian, who earned an MSW from San Diego State University in 1976. The California Social Welfare Archives launched the Hall of Distinction in 2002 to ensure that the contributions of today’s social work leaders, innovators and pioneers will be recognized and preserved for the future. The archives plans to post oral history interviews with each of the six inductees. This year’s honorees leave a remarkable legacy.

A leader in counseling and educational services: Bill Coggins founded the Kaiser Permanente Watts Counseling and Learning Center, which offers a wide range of mental health and educational resources for free or at minimal cost for the children and families of Watts. Coggins served as the center’s executive director for more than 30 years. In May 2018, Coggins was honored as the first recipient of the UCLA Luskin Social Welfare Lifetime Achievement Award.

A dedicated child welfare advocate: As chief of Los Angeles County’s adoption division, project director of the Runaway Adolescent Pilot Project and L.A. County DCFS director of governmental relations, Kathleen Kubota has been instrumental in the advancement of social welfare programs directed toward improving the situations of children across Los Angeles. Kubota has been a trailblazer in bringing together diverse and even competing organizations to work toward shared social work goals.

A pioneer of culturally sensitive services: Yasuko Sakamoto spearheaded the creation of bilingual and bicultural social work programs for Japanese and Japanese-American communities in Los Angeles. Sakamoto founded the Nikkei Family Counseling Program and was involved in the development of the Nikkei Tomodachi Program, Nikkei Helpline and other support groups that cater to the unique cultural needs of the Japanese and Nikkei populations. As an author and mental health advocate, Sakamoto has worked to improve the lives of the underserved.

Advocates for health, welfare and the environment: June Simmons is an innovator in senior healthcare programs who is dedicated to achieving better healthcare at lower cost for high-risk populations. Environmental justice and healthcare advocate Diane Takvorian strives to achieve public policies that improve the health of children, families and neighborhoods, as well as of the natural environment.