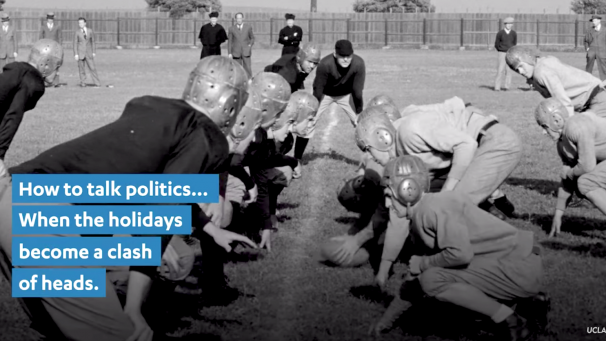 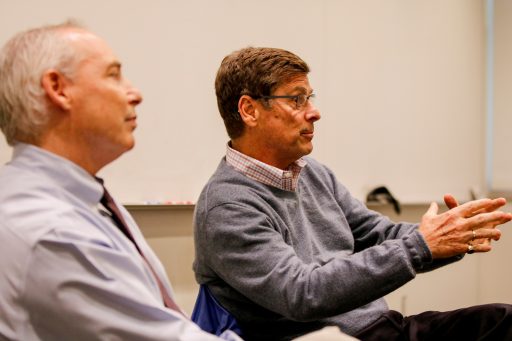 Today, national politics is dominated by rancor, name-calling and partisanship. The pressure to pick a side and take up the battle against enemies on the political left or right can seem particularly intense for the students who study public policy at the UCLA Luskin School of Public Affairs.

But it doesn’t have to be that way. As former GOP gubernatorial candidate William “Bill” Simon reminded attendees during a Senior Fellows Lecture Series discussion on June 8, 2017, actually getting things done in politics requires compromise and consensus.

“I feel very strongly that there is a role for sensibility. There is a role for courtesy,” Simon told a group of UCLA Luskin students and faculty members. “You have to have courtesy for people who don’t agree with you.”

The value of being open-minded was particularly apt given that the spirited discussion took place on the UCLA campus and also included political strategist Dan Schnur, who is a faculty member at cross-town rival USC.

“It’s really easy to point to the most irrational and repulsive voices on the other side and use them as an excuse not to engage with someone who doesn’t agree with you,” Schnur said of the current political climate. “I remind people that someone who disagrees with me 80 percent of the time isn’t my enemy. She’s someone I can work with 20 percent of the time. And think of what we can accomplish in that 20 percent.” 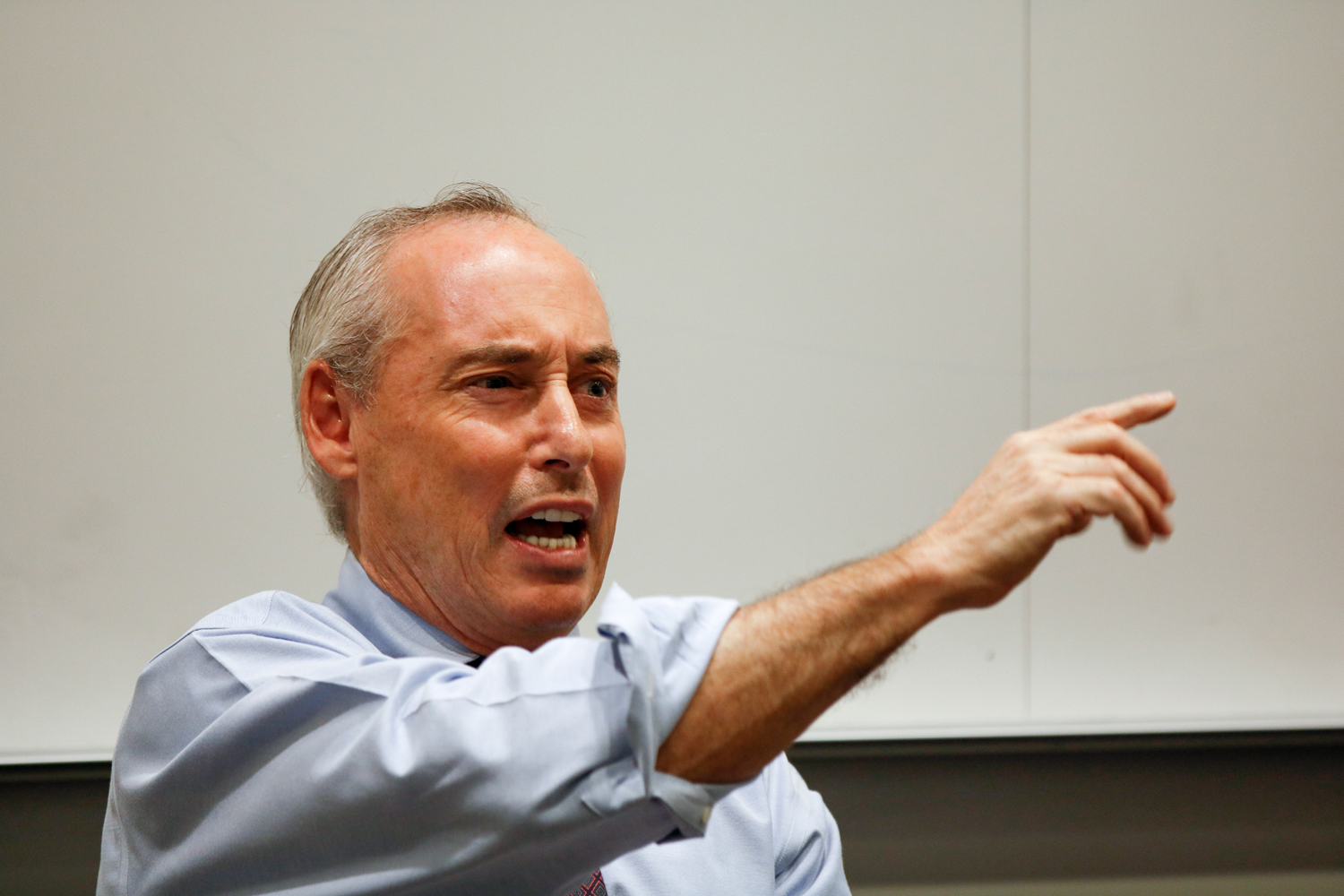 A wide-ranging Q&A session included discussions about volunteerism, student activism and speculation about the 2018 California governor’s race. The speakers addressed international issues like climate change. But the session was dominated by talk of the turmoil in Washington, D.C.

The gathering was organized by VC Powe, director of career services and leadership development, in part because of a request from students — some of them from other countries.

“College campuses like UCLA can be liberal-leaning, so it was great to see students come forward, asking for speakers who could talk about the current presidential administration from a more conservative and independent-thinking viewpoint,” Powe said. “We need to create more spaces like this for meaningful dialogue.”

Schnur is registered as a “no party preference” voter nowadays, but his resumé includes stints working as a communications director for Republican Sen. John McCain and a former GOP governor of California, Pete Wilson. Simon is a businessman and philanthropist who has co-taught a class at USC with Schnur and also serves as a visiting professor at UCLA in law and economics. He described himself during the UCLA gathering as an “unapologetic conservative Republican.”

Simon told the students that America is currently at an important intersection in history in which political consensus has eroded. He reminded them of another highly charged time of partisan politics.

“You had a conservative Republican like Ronald Reagan in the ’80s who could still get something done with a liberal Democrat like Tip O’Neill,” he said of the former president and House speaker, who ended up finding enough common ground to produce landmark reforms of welfare, taxes and Social Security. “And I think that has now been lost.”

The current political discord may turn out to be a historical aberration, Schnur said, pointing out that it’s a worthwhile reminder of what makes America unique. By happenstance, the UCLA session occurred on the same day as opening testimony by former FBI Director James Comey about whether President Donald Trump had acted improperly in seeking to derail an investigation of possible ties to Russia among Trump allies.

“A country’s chief executive is being questioned for what the head of our domestic law enforcement agency called ‘deeply disturbing behavior,’ and there is a constitutional process in place for another branch or branches of government to check that behavior should it become necessary,” Schnur said. “Whether you are a Republican or a Democrat, whether you are a no party preference or a Green or a Libertarian or a vegetarian, you ought to be able to take some real comfort, if not some real pride, in the idea … that there is a process and a system in place to address these potential excesses in a completely appropriate and legal and constitutional manner.”

Both Schnur and Simon said the country’s political divide certainly is being exacerbated by the actions and behavior of Trump.

“This is as much hatred as I have ever seen for a person in the political arena. And I think that’s too bad,” said Simon, who noted that he personally dislikes the president and questions his tactics despite agreeing with certain actions, including his choice of Neil Gorsuch to join the U.S. Supreme Court.

“But 62 million people voted for Trump. So obviously there is something going on,” Simon said.

He said many people who voted for Trump did so because they felt like their views had been overlooked.

Schnur said he also is no fan of Trump. He thinks the current political gridlock in Washington likely will be transitory and noted that the 2016 election result is already motivating party leaders to rethink policy positions and election strategy. Perhaps the end result will be a more thoughtful, reflective American electorate.

Schnur pulled out his cellphone and spoke about the wonderful sense of freedom and empowerment it provides to him, noting the near-constant flow of information and access to entertainment, ideas and opinions.

Then he pointed to the ear buds.

“As soon as I put these plugs in my ears to listen to my favorite music, I immediately lose any interest in what you are listening to,” Schnur said, motioning toward Simon as he continued the metaphor. “If I have one set of cable stations, and he has another. If I have one set of podcasts and websites, and he has another … we are not just disagreeing on the issues of the day. We are experiencing two entirely different versions of reality.”

Turning back to the gathering of students and faculty, and hinting at their desire to weather the current political storm and pursue careers that improve American policy, Schnur continued.

“What can we do? We can take the plugs out of our ears.”