Planning expert Leonie Sandercock provided insight about her late husband during the memorial service: “I feel so lucky to have spent 32 years next to this man, who I adored," she said. Photo by Les Dunseith

The late John Friedmann is widely regarded as having pioneered the field of urban planning theory.

“Some call him the ‘Pope of planning’; others call him the ‘Father of Urban Planning,’” said Martin Wachs, distinguished professor emeritus of urban planning, during a memorial for Friedmann on Nov. 2, 2017. “He always chuckled and giggled about those labels, and he really didn’t take them seriously,” Wachs said, pausing and then lowering his voice. “I think, secretly inside, he really did.”

This mix of honorific praise, bittersweet memory and wry humor was commonplace as friends, family, former colleagues and Luskin students — current and past — joined together at the UCLA Faculty Center to remember Friedmann, who passed away in June at the age of 91. In addition to his work in urban planning theory, Friedmann presided over the founding of Urban Planning at UCLA in 1968 and served as its chair four times. 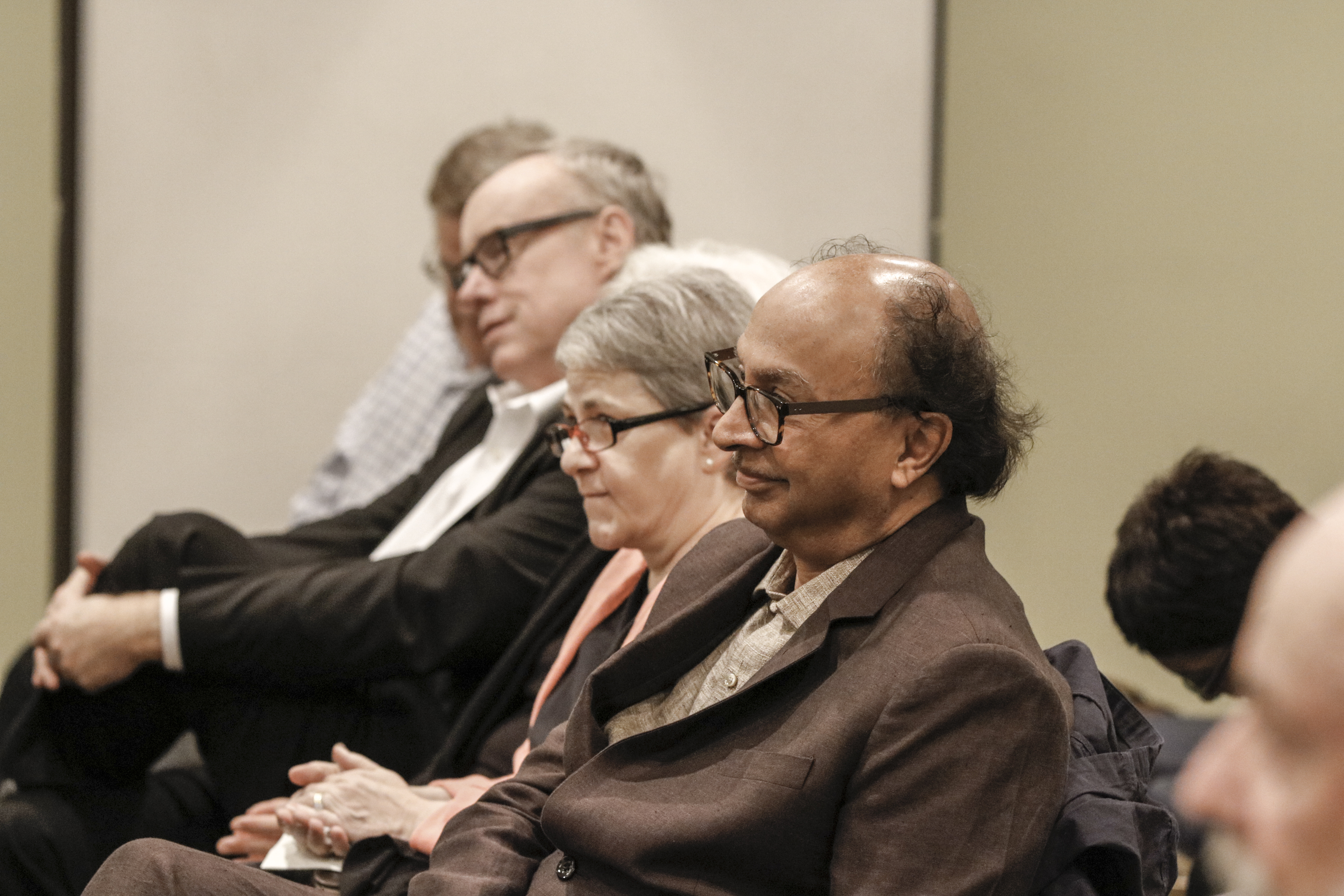 Bishwapriya Sanyal, who traveled from Boston to join other Urban Planning alumni at the event, sat next to Friedmann’s daughter, Manuela Friedmann, during the memorial service. Photo by Les Dunseith

“While this is a memorial to celebrate John, it’s impossible to avoid feeling sad,” current chair of Urban Planning Vinit Mukhija said in his opening remarks.

Mukhija noted that Friedmann had remained close with the Luskin School of Public Affairs even after leaving Los Angeles in the late 1990s when his career and personal life took him to Melbourne, Australia, and then to Vancouver, British Columbia. At the time of his death, the department was hoping to have Friedmann return to Westwood to teach the Planning Theory course in the Ph.D. program, Mukhija told the crowd of more than 50 attendees.

“I think it would have been terrific for our doctoral students to have that, but unfortunately, it wasn’t meant to be,” Mukhija said.

Mukhija, Wachs and others spoke of Friedmann’s elite standing in the field of urban planning. Friedmann wrote 18 books and more than 200 book chapters and articles. By themselves, his writings are cited more frequently than the aggregate works of any single planning program in the country, except for the Luskin School’s Department of Urban Planning.

“He was the intellectual force behind what we call ‘planning theory,’” Wachs said, noting that Friedmann also taught at MIT and in countries such as Brazil, Chile and Korea, as well as providing guest lectures at major universities around the world.

Friedmann’s accomplishments were many, but those in attendance also heard about a few of his foibles. Longtime love and wife Leonie Sandercock talked less of Friedmann the educator and more of Friedmann the man: “I feel so lucky to have spent 32 years next to this man, who I adored, and I struggled with and I rolled my eyes at, and I shared my life with. I’m happy that his life touched so many others.”

Sandercock and Friedmann fell in love while corresponding via handwritten letters as pen pals when Friedmann was at UCLA and Sandercock was in her native Australia. A highly accomplished planner herself, Sandercock said Friedmann’s intellectual acumen never waned. “He was still living fully,” Sandercock said of her husband’s final days.

Friedmann was often reflective, Sandercock said, telling of a recent encounter after a walk through nature, when Friedmann ticked off the “lucky things” that had led him to this point in life. Meeting Sandercock was one, she said with a smile. Being denied tenure at MIT was another — it led him to pursue career-changing research in Chile. And then there was the invitation from then-Dean of Architecture Harvey Perloff to come to UCLA and start the Urban Planning program.

In that instance, many of those in attendance felt like they were actually the lucky ones. Lucy Blackmar, assistant vice provost for undergraduate education initiatives at UCLA, recalled a phone conversation with Friedmann back when UCLA Urban Planning was in its infancy and Friedmann gave her the green light to pursue further education.

“I credit John Friedmann with my intellectual awakening,” Blackmar said. “Really, John was an educator, he was a thought leader, he was a global citizen, a man for all seasons and he had an insatiable intellectual appetite.”

Several other former students shared their memories of Friedmann during the memorial, including Goetz Wolff and Stephen Commins, both of whom later became Luskin urban planning lecturers. UCLA Luskin professors Ananya Roy and Anastasia Loukaitou-Sideris also spoke about Friedmann, saying he had provided inspiration to them long before they actually had a chance to meet him in person.

Cellist Anne Suda played throughout a reception that preceded the sharing of memories, an homage to Friedmann’s own appreciation of the instrument.

To honor the legacy of John Friedmann’s contributions to the field of planning we have established the John Friedmann Memorial Fellowship Fund. Recipients of the fellowship at UCLA Luskin will carry Friedmann’s legacy as leaders and change agents in our world today. If you would like to make a gift, please go here. 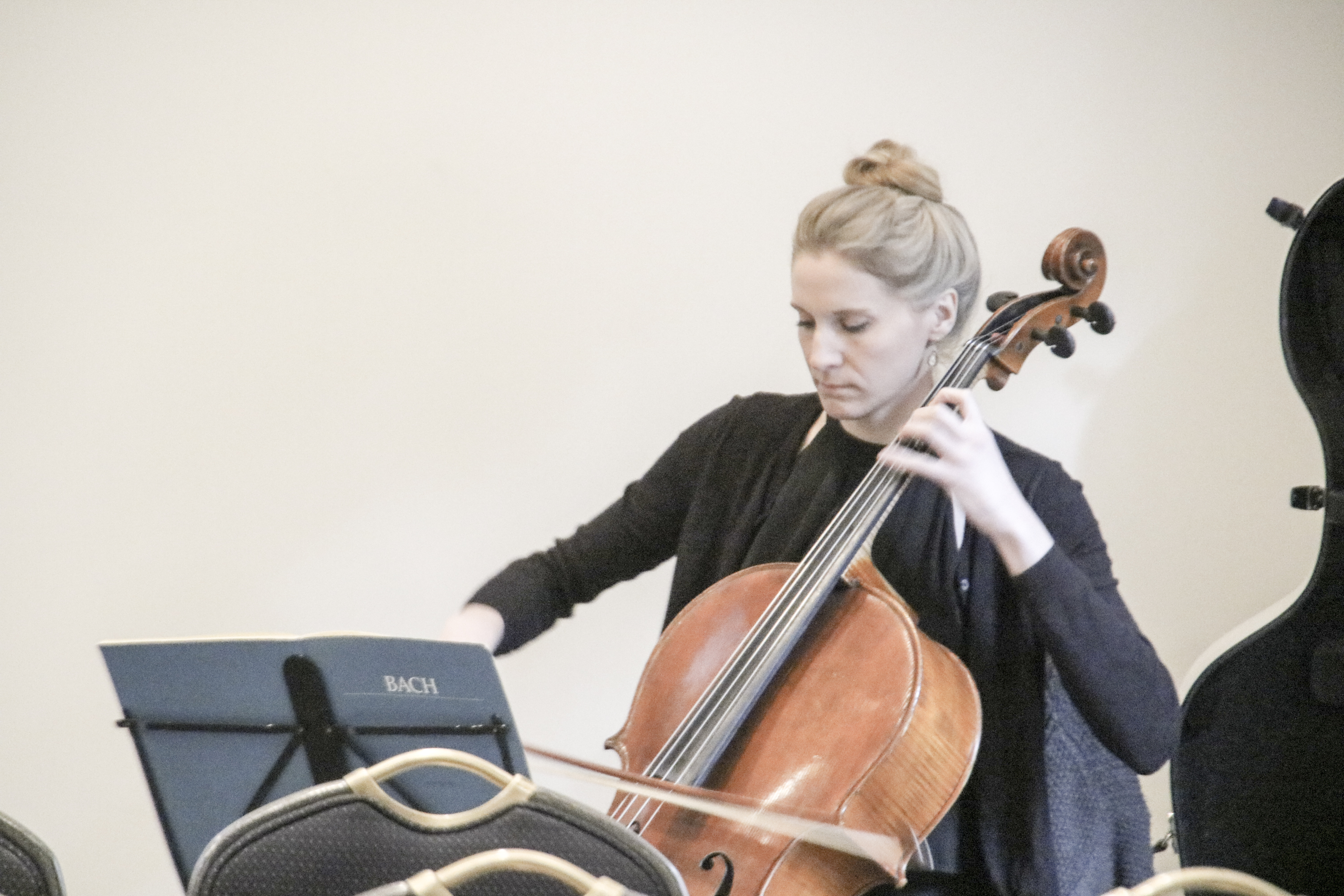 Cellist Anne Suda provided music during the reception, an homage to John Friedmann’s appreciation of the instrument. Photo by George Foulsham