In the face of extreme weather, polluted aquifers, overconsumption and other urgent threats to our water supply, Sandra Postel has reason to hope. The leading authority on water sustainability has traveled the world seeking out fresh strategies to protect an ecosystem that is under attack. “Yes, the water cycle is badly broken,” she told a gathering hosted by UCLA’s Luskin Center for Innovation on Jan. 25. “But through creativity, through innovation, through some interesting ingenuity, a good dose of courage and some risk-taking … we can fix it.” Instead of trying to tame nature, humans would be wiser to respect its rhythms, says Postel, who lays out her case in the new book “Replenish: The Virtuous Cycle of Water and Prosperity.” At the Luskin Innovators Speaker Series event, Postel was joined by a panel of policy experts and entrepreneurs from across Southern California: Eric Hoek, former UCLA professor and co-founder of Water Planet, which develops advanced water filtration systems; Rita Kampalath, program director for L.A. County’s Chief Sustainability Office; and Omar Moghaddam, who has three decades of experience working with wastewater and renewable resources in Los Angeles. The discussion was moderated by Mark Gold, associate vice chancellor of environment and sustainability at UCLA. Postel stressed that collaboration is key to a more secure water future. A national initiative she co-created, Change the Course, draws together business leaders, conservationists and the public to reduce waste and replenish water in the natural world. To date, Change the Course has restored more than 8 billion gallons to depleted rivers and wetlands, earning it the 2017 U.S. Water Prize for creative water management solutions. “Sounds like a big number,” says Postel. “It’s a drop in the bucket, of course, of what’s needed. But it’s made a difference.” — Mary Braswell

View a Flickr album from Postel’s talk and the panel discussion that followed: 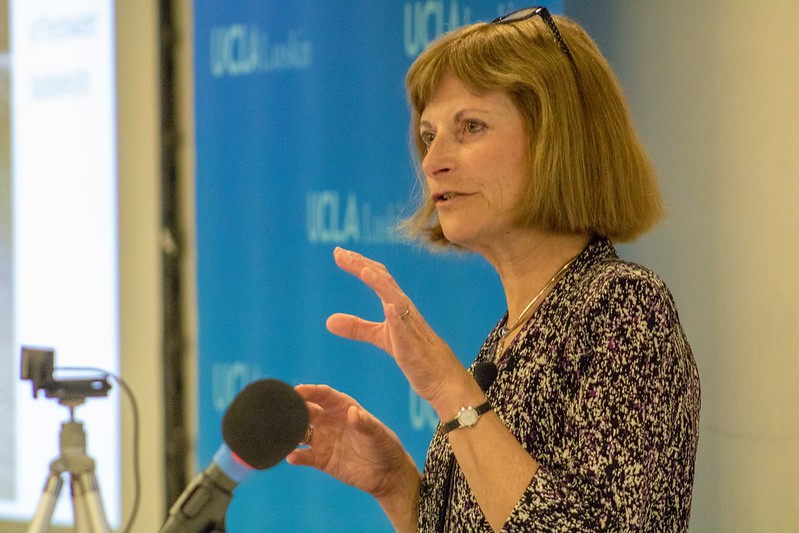 On Jan. 18, 2018, Theresa Williamson shared her experience as an community organizer in Rio de Janerio. In her presentation for the Global Public Affairs program at UCLA Luskin, she spoke of academic and practical ways to work with communities and empower them for positive development and change. Williamson walked through the thinking process and the lessons she learned from founding the organization. Click here to view the slides from her presentation. 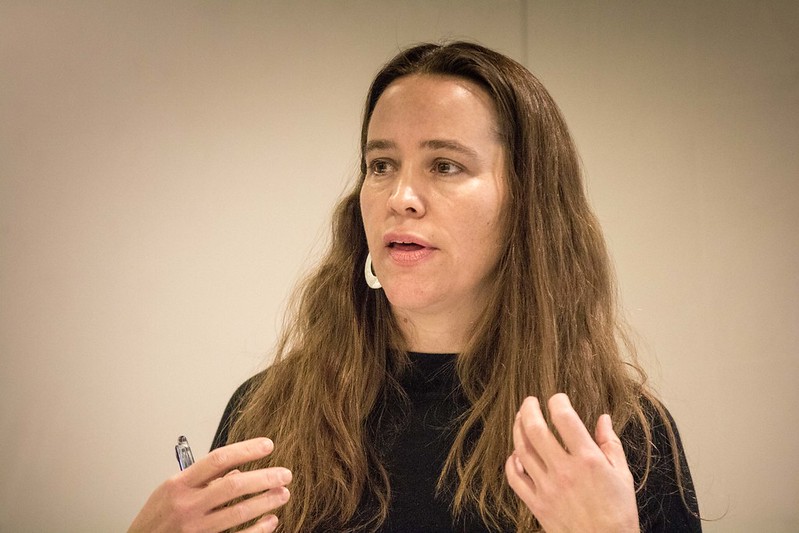 From the sun-bleached poor neighborhoods on the edge of Bengaluru, India, to the traffic-choked streets of Mexico City, students from the UCLA Luskin School of Public Affairs have been tackling global urban challenges this summer as they participate in a unique fellowship program.

“These are not ‘trips.’ They are professional-level placements in low- and middle-income countries that provide students with a hands-on experience in different areas of global public affairs,” said Stephen Commins, associate director of Global Public Affairs at Luskin. Commins, also a lecturer in Regional and International Development in the School’s Department of Urban Planning, said that students can link their required second-year research and policy projects (requirements for their respective master’s programs at Luskin) with these placements.

IPP, an integral part of the Global Public Affairs Initiative at Luskin, is a global gateway for students from all three Luskin departments to work with local and international communities negatively affected by various political, economic and environmental processes within the context of international development.

As part of the program, all Luskin IPP fellows have been blogging about their experiences this summer on the Global Public Affairs website.

Gus Wendel’s IPP placement took him to Mexico City. For the Urban and Regional Studies master’s (MURP) student, the joy on a child’s face in the simple act of play says it all — even from behind the mask of a luchador, a Mexican wrestler.

But in Mexico City, one of the world’s most populous urban centers, the streets are choked with cars and relentless traffic. It’s no place for children to play freely without worry and constant danger.

That may be changing, if only two hours at a time. But it is a start for Wendel who is focusing on creating safe, temporary play spaces for children to run, jump rope or enjoy crafts and other activities. Wendel worked on a project called Peatoniños, developed in collaboration with the Urban Humanities Initiative and Laboratorio Para La Ciudad.

“Peatoniños is a project that aims to liberate and recuperate the streets of Mexico City so that kids can use them to participate in activities such as playing freely, conversing with neighbors, learning new things, imagining different worlds, or making new friends,” Wendel said in an interview. The name of the project is a combination of the words peatón (pedestrian) and niños (children).

He said the collaboration began after a visit to UCLA by Laboratorio founder and director Gabriella Gómez-Mont, who took part in a conversation on issues of youth mobility, mortality and playfulness in Mexico City. The conversation focused on changing public consciousness through changes in public narrative.

Part of that narrative, Wendel explained, includes the following statistics: In Mexico City, 56 percent of the population is under 26 and the number one preventable cause of death for youth is pedestrian-automobile accidents.

While it is still early to draw conclusions from the experience, “it is hard not to see the ways that Los Angeles can learn from Mexico City’s example — specifically the relationship between community members and local government,” Wendel said.

“But each play street intervention is only successful as far as local community members are willing to get involved,” he added. For example, those who informally operate public parking, known as “viene vienes,” voluntarily helped to close down streets to traffic for two hours during the first intervention, making it possible to ensure kids are playing in a safe place.

Wendel said that establishing trust between community stakeholders and government and planning for a certain degree of uncertainty seem to be critical elements to ensuring that these types of interventions work.

“Cars and the culture that supports them are relentless, both here and in L.A., so establishing different tactics for slowing traffic and shutting down streets in a civil manner is crucial,” he said.

Upon landing in Zambia in southern Africa, Corina Post, a master of social welfare (MSW) student at Luskin, said her first impression was that everything seemed “normal” and similar to Los Angeles. “The streets are paved; traffic laws are abided,” she blogged.

But Post, who was placed with World Vision, said she soon noticed small differences. “I felt not too far from home initially, until subtleties reminded me of the privileges the western world holds,” Post said.

As an example, she recounted an early experience from her time in Zambia. During her ride from the airport, she noticed an advertisement for a bank sweepstakes with an unusual prize: 1,000 bags of concrete. She said that “knowing concrete is its own commodity” was one of the first reminders that she “was no longer in Kansas; I was in Africa.”

Other small differences included her interactions with the people in her host country. “People seem to be quite kind to me — honestly, kinder than I have ever been received abroad.” For example, when Post said she went to an exercise class the teacher offered to drive her home. And when asking for directions she said she was not only given directions but people offered to walk with her, a “change of pace from the ‘time is money’” culture she said is used to in the U.S.

A major takeaway for Post was “the gross disservice we as global citizens practice in the homogenization of whole continents.” But, she continued, “This drives me to gain as much exposure as possible to share back home.”

Master of Public Policy (MPP) student Diego De La Peza traveled to Santo Domingo in the Dominican Republic. There he was paired with the Instituto de Sexualidad Humana, a sexual and family health clinic at the Universidad Autonoma de Santo Domingo, which focuses on educating the Dominican population on sexual abuse and health issues.

“My project has been conducting quantitative research on victims of sexual abuse and analyzing patterns of services solicited, common diagnostics, and social behaviors of these patients,” De La Peza wrote in his blog. He said that his goal is to combine his findings with procedures set by the ministry of public health. He explained that the purpose is to make recommendations on how primary health doctors should respond when a sexual abuse victim seeks medical attention.

“Working on this project in a country whose sexual health beliefs are highly influenced by patriarchy and religion has been an eye-opening experience,” he wrote. “I found it unbelievable the difference that being with a male figure has when walking the streets of the city. Through my research, I have also learned about men’s perspective on women sexuality, and I cannot help but think about all the work that needs to be done in order to break down these barriers that are blocking the country from reducing such high levels of sexual violence.”

De La Peza said that this experience has been educational and inspiring.

“My work environment serves a constant reminder that there are people working hard to improve the issues of the country, advocating for policy changes and better government interventions,” he said. When asked if he would do it again, he wrote: “Without even processing the question, I couldn’t help but answer: in a heartbeat.”

To read all of the IPP fellow blogs from around the world please visit http://global.luskin.ucla.edu/blog/