Voting rights experts from around the country gathered at a UCLA conference to brainstorm ways to protect Americans’ access to the ballot box, even as votes cast in the 2020 election continued to be challenged in court.

Elected officials on the front lines of the civil rights fight joined legal scholars, policy analysts, attorneys and advocates at the Dec. 8–9 virtual seminar. The event was hosted by the Voting Rights Project, a division of the Latino Policy and Politics Initiative at UCLA Luskin.

The seminar’s organizers intend to turn the attendees’ shared wisdom into a report to Congress that could help shape comprehensive national legislation to safeguard the right to vote.

Among the topics that guided the conversation: voter suppression and intimidation during this year’s election cycle and the Supreme Court’s 2013 rollback of core provisions of the landmark Voting Rights Act of 1965.

“This is what we get when we have elections without the full protection of the federal Voting Rights Act that stood and served well for more than 50 years,” California Secretary of State Alex Padilla said. “It has unleashed the floodgates for a lot of the voter suppression measures that we’ve seen in the last seven years and we saw in full display in the 2020 election.”

Texas Rep. Marc Veasey, who co-founded the Congressional Voting Rights Caucus, said the country is witnessing “egregious stories that you would think we wouldn’t be seeing in modern-day America.”

In his state, he said, officials have attempted to require people registering to vote to first produce a birth certificate or passport. Another proposal, seen as an invitation to voter intimidation, would have permitted cellphone recordings of citizens casting their ballots as a way to document “fraud.”

“We’re revisiting a very dark time in U.S. history where people just absolutely have no regrets at all about rolling back the rights of people to be able to vote, particularly people of color,” he said.

For example, Padilla noted, during the Georgia primaries, the wait time to vote in Black neighborhoods averaged 51 minutes, compared with six minutes in white neighborhoods. 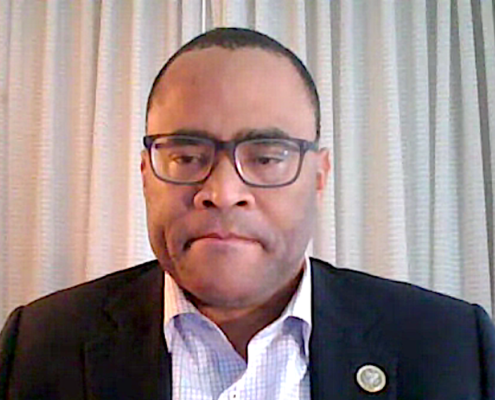 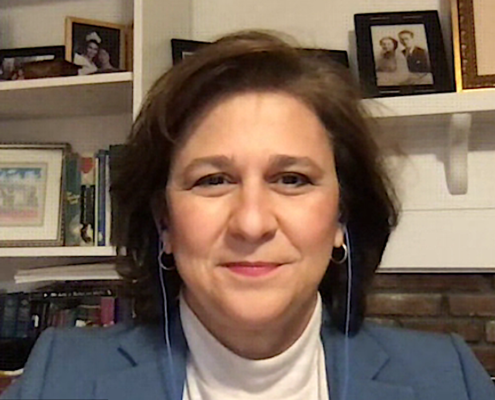 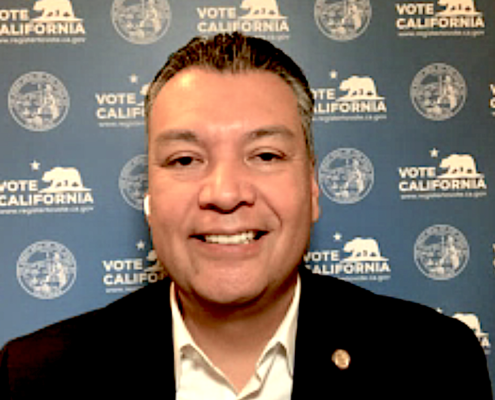 While some state and local jurisdictions are pushing for rules that chip away at the freedom to vote, others are lighting the way for federal reforms, the speakers stressed.

Padilla and Rhode Island Secretary of State Nellie Gorbea spoke of changes in their states that have made it easier for citizens to register and vote — changes that were accelerated because of the COVID-19 pandemic.

“What made this cycle different is that the pandemic focused us to reexamine how people vote,” Gorbea said. “And in many of our states we adapted our democracy to provide easier and safer access to the ballot box, which meant that people could vote while still taking care of their health.”

The seminar included workshops that zeroed in on specific facets of the voting rights movement, including fair redistricting, equal access for low-income and minority communities, planning for the next public health crisis, and overcoming procedural hurdles that have blocked past efforts to bring change.

Panelists and participants in the audience weighed in on the strengths and omissions of legislation already in the pipeline, including HR1, the For the People Act, and HR4, the Voting Rights Advancement Act.

The discussion took place amid persistent efforts by President Donald Trump and some of his supporters to discredit the results of the 2020 presidential election. Padilla said those efforts have been fueled by “baseless conspiracy theories that have been spewed that seek to question the legitimacy of votes cast by Black voters and Latino voters, among others.”

The seminar capped a hectic electoral season for the Voting Rights Project, whose members conducted research, wrote policy reports and appeared in court to battle efforts to disenfranchise voters.

“We’re looking to get something in front of Congress that can be signed and that will protect against the onslaught of voting rights–related rollbacks that we’re seeing in this era,” said Rush, a research fellow at the Voting Rights Project.

Alisa Belinkoff Katz, associate director of the Los Angeles Initiative at UCLA Luskin, wrote an op-ed for the Los Angeles Times that laid out California’s spotty history when it comes to free access to the ballot box. In the 19th and early 20th centuries, the state systematically discriminated against groups including Chinese immigrants and the working poor, she wrote. By 1960, the state had veered away from tactics such as arduous registration requirements, literacy tests and voter roll purges and entered a more inclusive era. While California now offers early voting, vote by mail, internet registration, same-day registration, a “motor voter” program and other policies designed to encourage voting, “the California electorate remains older, whiter and wealthier than the population at large,” wrote Katz, lead author of a recent study on the evolution of voter access in the state. “Until our democracy gives voice to all segments of society, we still have work to do.”

Texas voters and the UCLA Voting Rights Project scored a legal victory with a federal judge’s dismissal of a suit to invalidate more than 127,000 ballots in the state’s most populous county. Chad Dunn, the project’s director of litigation, has been leading the legal effort to protect voting rights in Texas and was part of the legal team defending the drive-through voting option in largely Democratic Harris County. This option permitted voters to cast their ballots from their cars, similar to drive-through banking. The drive-through voting plans had been in place since July and had been approved by the Texas secretary of state. The plaintiffs, members of the state’s Republican Party, filed two motions to the Texas Supreme Court seeking to throw out the drive-through votes; both were denied. The plaintiffs then turned to the federal courts, where a judge ruled Monday that they did not have standing to sue. Hours after the decision was handed down, the Republican plaintiffs filed an appeal to the U.S. 5th Circuit Court of Appeals, which denied the motion early Tuesday — Election Day. “It was obvious that this method of voting was approved by the state of Texas and this late attempt to strip voters of their rights was rightfully denied,” Dunn said. “Every vote from a qualified voter should be counted.” — Sonni Waknin

UCLA’s Voting Rights Project (VRP) scored major court victories in Texas and Pennsylvania in its fight against attempts to suppress the voice of voters in this critical election year. In Texas, a federal judge blocked Gov. Greg Abbott’s attempt to limit ballot drop boxes to one per county. VRP, part of the Latino Policy and Politics Initiative at UCLA Luskin, partnered with the League of United Latin American Citizens to sue Abbott. Chad Dunn, VRP’s director of litigation, argued the case in federal court on Oct. 8. The following day, U.S. District Judge Robert Pitman struck down Abbott’s order, finding that it resulted in substantial confusion, created burdens on disabled, elderly and minority voters, and “likely violates their fundamental right to vote.” To support the case, Matt Barreto, VRP’s faculty director, co-authored an expert report with research fellow Michael Rios MPP ’20 and political science doctoral students Chelsea Jones and Marcel Roman. They documented that Abbott’s rule would force some voters to travel more than 90 miles round-trip to a downtown ballot return center, as opposed to a satellite county office within five miles. The research also found that many voters preferred using official drop-off sites rather than mailing in their ballots due to concerns about Postal Service slowdowns. In Pennsylvania, a U.S. District Court dismissed a lawsuit filed by President Trump’s reelection campaign that sought to place several restrictions on voting, including prohibiting voters from submitting ballots in drop boxes. VRP submitted an expert report documenting the importance of ballot drop boxes and the need to prevent voter intimidation. In the event these rulings are appealed, VRP is ready to file an appellate brief to defend every citizen’s right to vote.

Update: On Oct. 27, the Texas Supreme Court upheld the governor’s order to restrict the state’s counties to only one drop-off site for mail-in ballots.

In a Q&A with Governing, Latino Policy and Politics Initiative Executive Director Sonja Diaz weighed in on the links between systemic racism and immigration policy and set out a vision for a more equitable post-pandemic society. COVID-19, police violence against people of color and persistent economic inequality have created an existential crisis in the United States, and “incremental change is not going to solve anything,” Diaz said. “We cannot go back to a ‘normal’ with so many Americans living on the streets, so many Americans without health insurance, so many Americans being targeted or racially profiled by our police. We have to re-envision what a post-coronavirus America looks like,” she said. Diaz also co-authored an opinion piece for Morning Consult that decried efforts to disenfranchise voters of color and called on Congress to act decisively to protect the integrity of the 2020 Census.

The UCLA Latino Policy and Politics Initiative (LPPI) and its marquee advocacy project, the UCLA Voting Rights Project, hosted an April 2 webinar on the importance of vote-by-mail programs in upcoming primaries and the November general election amid the coronavirus pandemic. Leading experts on voting rights joined the conversation, moderated by Sonja Diaz, LPPI’s founding executive director. With Election Day just months away, “it is not a matter of if, or a matter of when — the question is how do we provide the opportunity for people to vote because we must and we will,” California Secretary of State Alex Padilla said. Stanford Law Professor Pamela Karlan added, “This is not the first time Americans have voted during a crisis.” Matt Barreto, LPPI and Voting Rights Project co-founder, emphasized the importance of outreach to communities of color, and Orange County Registrar of Voters Neal Kelley assured that “voters will adapt and are looking for opportunity and expanded access.” The Voting Rights Project has released a report outlining four steps that states can begin implementing now, as well as memos on a House bill to protect voting rights and on safe voting amid the pandemic. The publications address the equitable implementation of a vote-by-mail program to encourage voter participation. As Chad Dunn, director of litigation at the Voting Rights Project, said at the close of the webinar, “It’s on all of us to double our commitment to democracy and find a way to make this work in all 50 states and territories.” — Eliza Moreno