The U.S. Constitution, by design, sets up a weak and limited government. In short, “it is set up to fail,” says William Schneider, a visiting lecturer this spring at the UCLA Luskin School of Public Affairs.

“The wonder is that it actually does work. What makes it work is public opinion,” says Schneider, a leading U.S. political analyst and professor at George Mason University’s Schar School of Policy and Government, who is teaching the undergraduate course “Public Opinion and Public Policy.”

Schneider, who has covered every U.S. presidential and midterm election since 1976 for numerous news outlets and publications, is among a group of top scholars from across the nation adding depth and breadth to the world-class faculty at the Luskin School.

Schneider’s class follows offerings from visiting professors Steven Nemerovski from Columbia University and Gary Orren from Harvard, who taught during winter quarter. All three visitors from the East Coast explored influence, advocacy and opinion-making as tools to effect policy change.

For Schneider, the Constitution works when there is “a strong sense of public urgency. In other words, a crisis.”

He explores this thesis — “and why the U.S. is more bitterly divided than at any time since the Civil War” — by looking at policy battles over civil rights, the financial crisis and terrorism. The course also focuses on the way public opinion has shaped policy on issues such as abortion, immigration, same-sex marriage, gun control, health care and military intervention.

A core element of American populism is the belief that politics is the enemy of problem-solving, he says. “That’s why we often elect political outsiders,” says Schneider, whose new book, “Standoff: How America Became Ungovernable,” will be published in May 2018. Schneider hopes his students will learn that “there is a reason why you can’t run government like a business. Business is not a democracy.”

When Orren, the V.O. Key, Jr., Professor of Politics and Leadership at Harvard, arrived at the Luskin School this winter, he made a convincing case for taking his graduate-level class, “Persuasion: The Science and Art of Effective Influence.”

“Persuasion lies at the heart of our personal and professional lives, whether the goal is to convince one person in a face-to-face encounter, influence a small group in a meeting, sway an entire organization or win over the public,” his course description said.

“It is challenging enough to lead those who agree with us,” says Orren, who has taught at Harvard for nearly half a century and also worked as a political advisor in local, state, national and international election campaigns. “But inducing others to willingly follow us when they are initially skeptical or opposed to our goals — persuading them — is the greatest challenge facing aspiring leaders.”

That pitch, and a recommendation from a Harvard alum she knows, convinced second-year MPP student Farah Setyawati to take Orren’s course.

“I like the course because it has a unique exposure to psychology. It got me thinking a lot about human behavior,” Setyawati says.

She now pays attention to body language and “reading the room,” and recognizes the importance of knowing the client. She also likes the required “three-minute pitch” exercise that allowed her to practice her presentation skills. 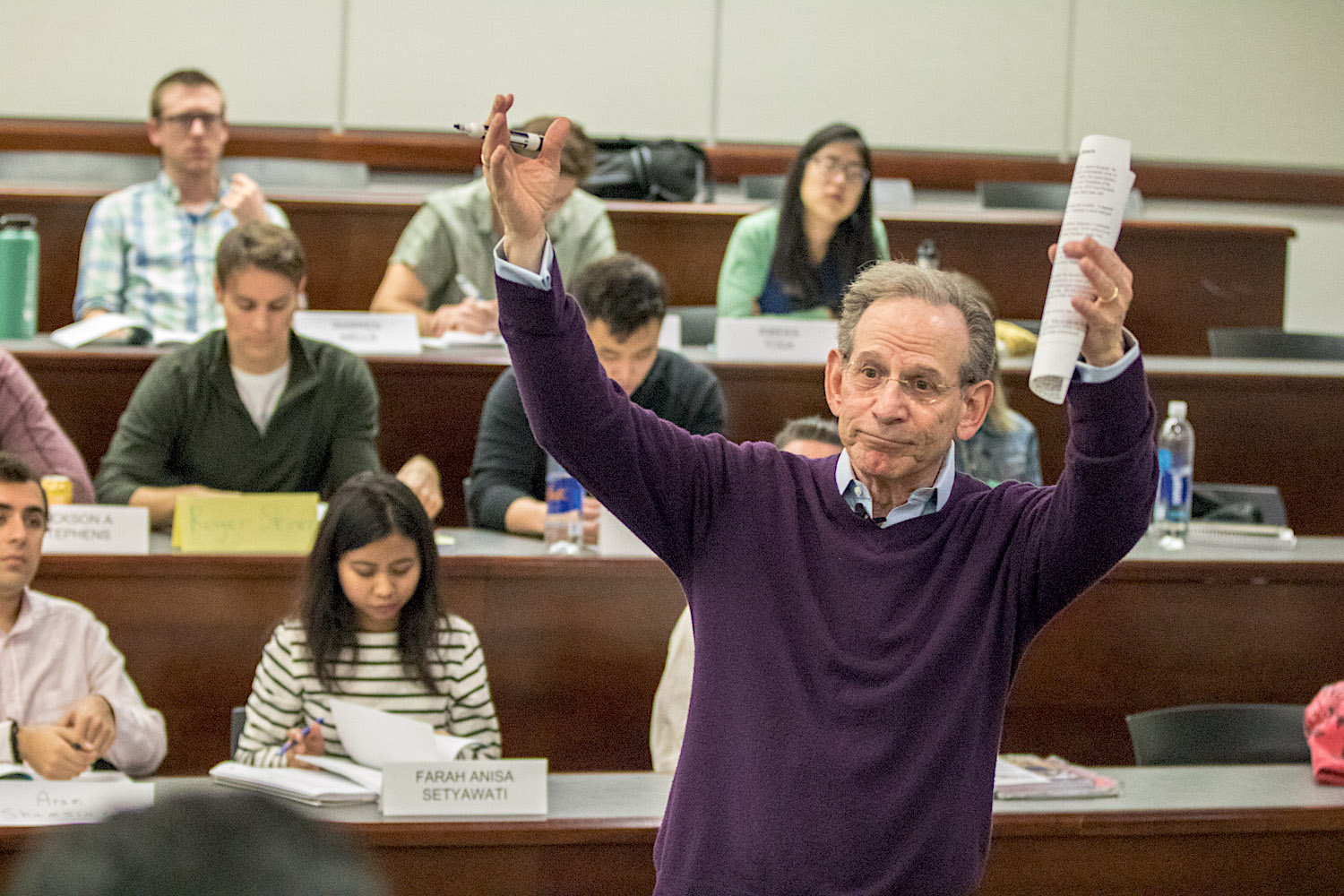 Visiting Professor Gary Orren. To Orren’s right is MPP candidate Farah Setyawati, who said the class “got me thinking a lot about human behavior.” Photo by Les Dunseith 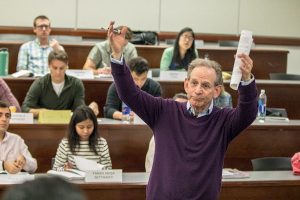 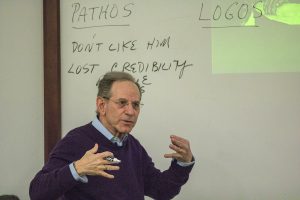 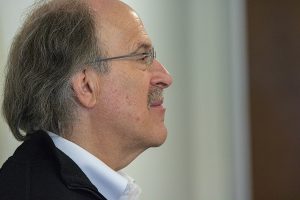 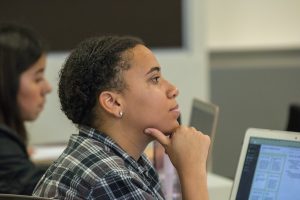 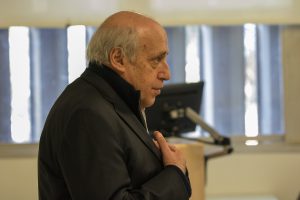 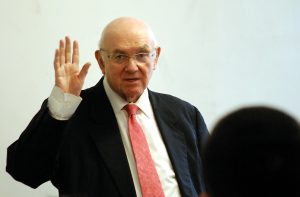 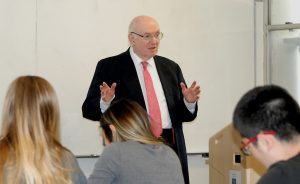 When Nemerovski brought his popular undergraduate course, “Advocacy and the Legislative Process,” from Columbia to the Luskin School, he immediately brought up the dreaded “L word” — “how society feels about lobbyists and are they the scourge of the earth or something. We talk about that up front and get past that immediately,” Nemerovski says. “Then the whole class is about strategy, … the role of advocacy and the tools needed to navigate successful outcomes.”

In addition to a career as an academic, the Columbia professor has worked as a political lobbyist, TV program host and author of “Third Party,” a series of political novels. He drew on that vast experience to bring in a number of guests with first-hand experience in advocating for legislation:  a state representative from Illinois; two former California Assembly members; and Dan Glickman, a former member of Congress from Kansas, U.S. secretary of agriculture in the Clinton administration, and former head of the Motion Picture Association of America.

When students have “heard four or five people in this industry say it’s all about trust, your word is your bond, when they leave the class … they’re going to understand what this is about — trust and word and bond,” Nemerovski says.

“One of my guest speakers actually commented that my class asks better questions than the more sophisticated groups he speaks to. That really speaks for the class and their enthusiasm for the speakers,” he says.

UCLA undergraduate student Axel Sarkissian says the course has been among the most interesting he has taken and has given him a better understanding of “how lobbying is done, an important lesson for those of us interested in government and for anyone interested in public engagement.”

“I have particularly appreciated Professor Nemerovski’s efforts to integrate practitioners — politicians, lobbyists and others — into the course. Hearing their perspective on how they interact with each other and what effect this has on policy has been fascinating,” says Sarkissian, who is completing the Luskin School’s undergraduate minor in Public Affairs.

Nemerovski challenges his students to become “citizen lobbyists.” During winter quarter, they were asked to lobby their congressperson on Deferred Action for Childhood Arrivals (DACA), also known as the Dream Act.

“I can’t tell them what to think — whatever side they may be on — so they have to decide what they think and they have to act on it,” says Nemerovski, who notes that part of the exercise is to wrangle not only with the issue but what actions they need to take. “I’ve been watching them struggle with it — ‘how am I really going to do this?’”

Nemerovski also places students on each side of a bill. Some must develop strategies to pass it, others to defeat it.

“They will walk in with a strategy and I will poke holes in it,” Nemerovski says.

But he adds: “I always tell my kids the first day of class they’re going to have fun.” 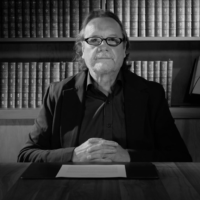 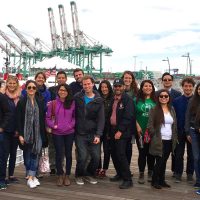