Two dozen UCLA Luskin Public Policy students spent just one afternoon with former Gov. Gray Davis, but they came away with nearly half a century’s worth of wisdom and insights gained during his service to California.

The wide-ranging conversation touched on the Deferred Action for Childhood Arrivals program (DACA), cannabis, teacher strikes and those decades — long ago — when California was a red state. To students worried about the role of policymakers in an era when facts are disrespected, Davis had words of encouragement:

“Your day is coming,” he said.

“Every presidential election is a referendum on the incumbent,” he said. Richard Nixon led to Jimmy Carter. George W. Bush led to Barack Obama. And in 2020, Davis predicted, Donald Trump would lead to the anti-Trump — “a more cerebral, more humble and more thoughtful candidate,” quite possibly from the public policy ranks.

“Following Trump, I’m convinced, is one of you sitting in a law library; you’re so modest you don’t even use the word ‘I.’ It’s always ‘we,’ and you’re wearing some cardigan sweater or something,” he said.

Davis’ appearance on April 4, 2018, kicked off “Today’s Los Angeles and the Institutions and Leaders that Make It Work,” an advanced seminar taught by UCLA Luskin School of Public Affairs lecturer Zev Yaroslavsky — himself a fixture in Southern California politics. The longtime city councilman and county supervisor is now director of UCLA Luskin’s Los Angeles Initiative, which focuses on the intersection of policy, politics and history in the region.

“You have the opportunity to talk to a governor of California, and there have only been 39 of them,” Yaroslavsky told the class. “He’s had the benefit of governing both in good times and bad times.”

The students took full advantage. One of the budding policymakers sought out Davis’ views on how government can be most effective.

“Everything that’s ever happened in this country that’s exciting, new, had a big private-sector role.” 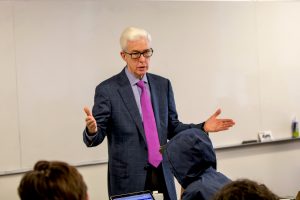 Former Gov. Gray Davis shares insights from his decades of service to the state of California. 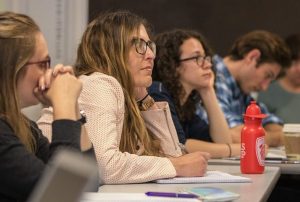 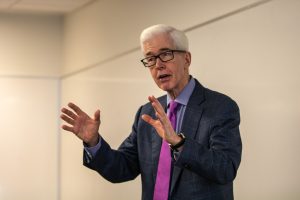 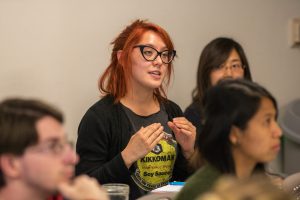 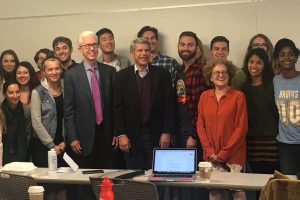 With the governor’s race in full swing, one student asked about the most pressing issue California’s next leader will face. Davis’ answer had national scope.

The conundrum that California faces is how to remain at the forefront of innovation without worsening unemployment. The downside of artificial intelligence, robots and other advanced technology is that jobs are put in peril, Davis said.

“What are we going to do with these people who used to have jobs? We need people working,” he said.

Davis posed a challenge to higher education, including the UC system: “Why can’t we take courses online? … This would create more opportunity for people who can’t afford to be in a classroom.”

Davis stepped into the political arena nearly 50 years ago, after a tour in Vietnam. On his journey to the governor’s office, he helped Tom Bradley win election as Los Angeles’ first black mayor in 1973, served as Jerry Brown’s chief of staff during his first term as governor, and was elected state assemblyman, controller and lieutenant governor.

He remains active in the public sphere. As one of four California governors to found the Southern California Leadership Council, Davis advocates for policies focusing on economic vitality, job growth and quality of life in the region.

Davis listed several points of friction between the state and President Trump: “He wants offshore drilling off the California coast. He’s fighting the notion that we’re a sanctuary state. He doesn’t seem to be that enthralled with Dreamers — some days he is, some days he’s not.  He’s very much against the emissions standards and mileage requirements. He wants to build a wall [along the Mexico border].”

Halting offshore drilling in federal waters will be an uphill fight, he said, but he was confident the state’s gasoline emissions standards are bulletproof.

As for the young immigrants who came out of the shadows and registered with DACA, Davis was confident they would be protected. “America has to keep its promises,” he said.

Davis also told the UCLA Luskin students “how proud I am of you for pursuing a career in public policy,” and he urged them to embrace the California promise.

“You live in this state; it’s your state now. We’re counting on you to keep it dynamic, keep it vibrant, keep it innovative, keep it open to new ideas. Keep it at the forefront of change.” 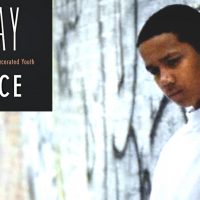 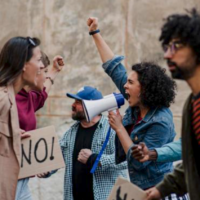 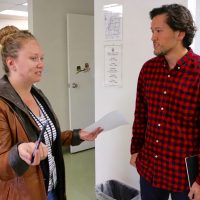