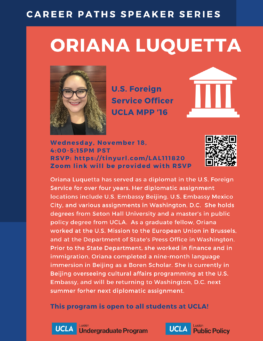 Oriana Luquetta has served as a diplomat in the U.S. Foreign Service for over four years. Her diplomatic assignment locations include U.S. Embassy Beijing, U.S. Embassy Mexico City, and various assignments in Washington, D.C. She holds degrees from Seton Hall University and a master’s in public policy degree from UCLA. As a graduate fellow, Oriana worked at the U.S. Mission to the European Union in Brussels, and at the Department of State’s Press Office in Washington. Prior to the State Department, she worked in finance and in immigration. Oriana completed a nine-month language immersion in Beijing as a Boren Scholar. She is currently in Beijing overseeing cultural affairs programming at the U.S. Embassy, and will be returning to Washington, D.C. next summer forher next diplomatic assignment.

This program is open to all students at UCLA!

The Economic Gamble Behind Hosting the Olympics