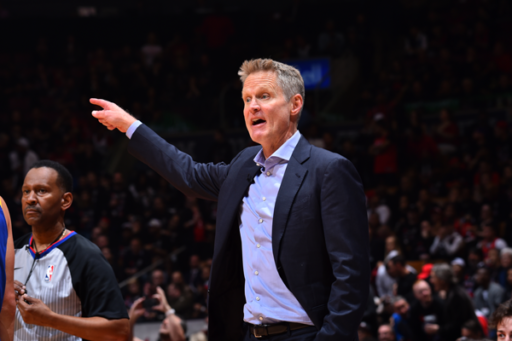 NOT TO BE MISSED

Join the Luskin School as we begin the new academic year with an exclusive discussion and Q&A with Steve Kerr, a former NBA star and current head coach of the Golden State Warriors.

This invite-only event will take place on Oct. 7 at 5 p.m. for the entire UCLA Luskin community — graduate and undergraduate students, faculty and staff, and alumni.

Learn more about the history of the Kerr family at UCLA, Steve Kerr’s commitment to social justice and his global perspective on issues of public importance.

REGISTRATION IS REQUIRED. Email invitations are being sent, but if you have not received yours by early October, please reach out to events@luskin.ucla.edu.

Steve Kerr, an eight-time NBA champion as a player and coach, is an outspoken public figure whose commitment to social justice and global perspective on issues of public importance is deeply rooted in the Kerr family’s history at UCLA.

Few athletes have had careers as varied or successful as Kerr — a sharpshooting guard who played on the USA Basketball team that captured the 1986 World Championship title in Madrid, the last American men’s team composed strictly of amateur collegiate players to capture a gold medal. As a pro, he won five championships while playing with the Chicago Bulls and San Antonio Spurs, posting a 45.4% career three-point field goal percentage that is the highest in NBA history.

Kerr, 54, has 30 years of NBA experience, not just as a player and coach, but also as a television analyst and front office executive. In his six years as head coach of the Golden State Warriors, Kerr has guided the club through five of the most prolific seasons in NBA history, winning three NBA championships and making five-straight NBA Finals appearances. He has coached or teamed up with many of the greatest of the great in the NBA: Michael Jordan, Shaquille O’Neal, Tim Duncan, Scottie Pippen, David Robinson, Dennis Rodman, Stephen Curry, Kevin Durant and Klay Thompson.

His perspective on life was shaped not just by his storied sports career, but also by his worldly childhood. Kerr was born in Beirut, and he lived in France, Egypt and elsewhere in the Middle East as the son of UCLA-based academics. When in Los Angeles, the Kerr family lived in Pacific Palisades, and young Steve Kerr was a ballboy in 1978 and 1979 at UCLA, where his father, Malcolm, was a political scientist and professor specializing in the Middle East.

Malcolm Kerr accepted a job as president at the American University of Beirut in 1982. Tragically, two years later, when Steve Kerr was a freshman at the University of Arizona, his father was assassinated by members of a radical Islamic group.
Steve’s mother, Ann Kerr, has worked at the International Institute at UCLA since 1991, coordinating the Visiting Fulbright Scholar Enrichment Program for the Los Angeles Metropolitan Area.

Steve Kerr is known for supporting progressive political causes, with an emphasis on access to education and gun control. He earned a degree in general studies from Arizona with an emphasis in history, sociology and English in 1988 and serves on the board of directors for Peace Players International, a Washington, D.C.-based organization that uses basketball as a means to bridge cultural gaps in areas of political, racial and religious conflict.

Steve Kerr and his wife, Margot, have two sons, Nicholas and Matthew, and one daughter, Madeleine.