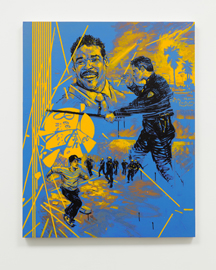 Part of the Meyer and Renee Luskin Lecture Series

Since April 29, 1992, the city of Los Angeles has not been the same, with racial tension peaking and riots sparking across the city making it clear that drastic change was being demanded in the relationship between police officers and racial minorities. Twenty-five years after the LA Uprising, there is still a question of the treatment of people of color and the socio-political factors in Los Angeles.

As our city continues to navigate modern activism, it is crucial to reflect on the history of political and social organizing that has created the Los Angeles of today. Join us as we utilize art and media to examine the socio-political factors that provoked the 1992 LA Uprising and its impact in the racial and economic climate in LA and across the US today.

The events will include two panels featuring a discussion of the evolution of community organizing as well as the role media, particularly film, has played in creating and reflecting social change. There will be a gallery displaying a variety of art inspired by the Uprising and a follow-up discussion with the artists. These events will be a co-program with the Los Angeles Asian Pacific Film Festival.

*Registration is required, but does not guarantee seating. Seating is first come, first served. Early arrival is suggested.*

The UCLA Office of Equity, Diversity and Inclusion will be hosting this day of panels, Keynote Address, and a CrossCheck Live to examine this historic event from multiple perspectives including community retrospectives, contemporary analyses, and forward-thinking dialogue that contemplates the future of Los Angeles.

2PM-4PM Screening followed by a Panel

Voices from LA by filmmaker Dai Sil Kim-Gibson explores the aftermath of the Uprising through a Korean American perspective. It will be followed by a panel on the evolution of community organizing since the Uprisings.

Robin D.G. Kelley – Professor of US History at UCLA

For better or for worse, our community vision and self-image has been shaped by — and in some unfortunate instances, tainted — by the way communities of color have been portrayed in mass media and popular entertainment. In this special conversation we will assess whether progressive change can be enacted by a paradigm shift in how we are portrayed onscreen, in print, and in other forms of commercial and independently-produced communication. Presented by UCLA Luskin School of Public Affairs, GOOK is a film set during the LA Uprising that explores families and relationships between Korean and African American communities. It will be followed by a Q&A with the filmmakers.

Presented by The Luskin School of Public Affairs