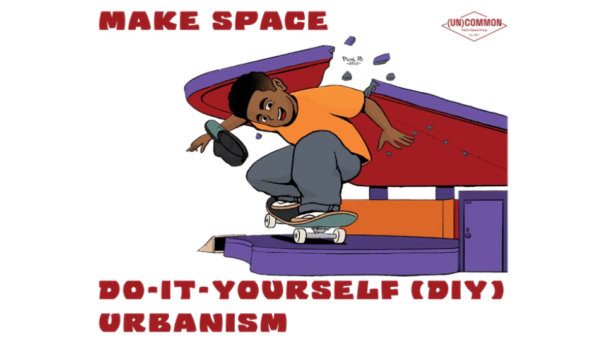 Come MAKE SPACE at the West LA Civic Center: An afternoon of do-it-yourself urbanism in this iconic public space.

Through art, music, and sport, we invite local residents, businesses, planners, and designers to learn about the history and future of the West LA Civic Center, and to MAKE SPACE together.

All are welcome at this free, public event. More details and schedule to be announced.

Built between 1957 and 1965, the West LA Civic Center Plaza was created as a hub for administrative centers, including the West LA Courthouse, City Hall, and a regional branch library, whose Mid Century Modern design reflects the popular architectural styles and civic aspirations of the period. Since then, the Plaza and its buildings have been appropriated for alternative uses, such as skateboarding, a farmer’s market, a hangout for youth, and has at times provided shelter for unhoused residents. The entire Plaza is now slated for redevelopment, and community members and activists have called on city leaders to ensure that the space remains open to the needs and activities of alternative public space users. The intention of MAKE SPACE is to support these activists by raising awareness of their important contributions to the space and community at-large.

(Un)Common Public Space Group was started at the UCLA Luskin School for Public Affairs, by Ph.D. students in Urban Planning. Our mission is to host conversations about public space in situ and to connect diverse stakeholders in public space advocacy. MAKE SPACE is the third event we’ve organized, as part of a series of events about public space – in different LA neighborhoods and with multiple communities. Our first event sought to build intergenerational public space through musical performance and food. Our second event drew attention to nighttime experiences of public space through a community-led tour and design charrette.

Book Talk With Francesco Da Vinci, Author of ‘I Refuse to Kill’
Scroll to top