A UCLA School of Law story highlighted Taylor de Laveaga, a joint Luskin School MPP and UCLA Law School student, who recently presented a constitutional case in the United States Court of Appeals for the Ninth Circuit in Seattle, Washington. Just one year into her legal studies, de Laveaga introduced and presented arguments for a First Amendment case to the three-judge panel, each testing her on points of law relevant to the controversy. The case, Rynearson v. Ferguson, challenges Washington’s current law on cyberstalking. Without missing a step, de Laveaga — who prepared extensively for the case with UCLA Law professor Eugene Volokh — answered all of the judges’ questions and was cited by the court for an admirable first appearance in court.  “Your colleague has done a good job of presenting the case,” commented Senior Circuit Judge Richard Clifton to Volokh, who also participated. 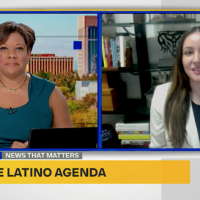