UCLA Luskin honored its Class of 2021 with two days of celebrations, including an on-campus ceremony that brought classmates together after more than a year of remaining apart. The June 10 stage-crossing event felt like a class reunion for many students who completed their coursework remotely during the COVID-19 pandemic. Although some health protocols remained in place, students from the School’s public policy, social welfare, urban planning and undergraduate programs were able to gather at UCLA’s Los Angeles Tennis Center to hear their names read aloud and take photographs with Dean Gary Segura, department chairs and fellow graduates. “Today, we have so much to celebrate,” Segura told the assembled graduates. “You have accomplished, against all odds, completing your UCLA degree during a global pandemic, and we could not be prouder of you.” Formal commencement ceremonies and speeches were posted online June 11 as the Luskin School bestowed master’s and doctoral degrees — and, for the first time, the new Bachelor of Arts in Public Affairs.

View a livestream of the on-campus event on Vimeo and additional images on Flickr. 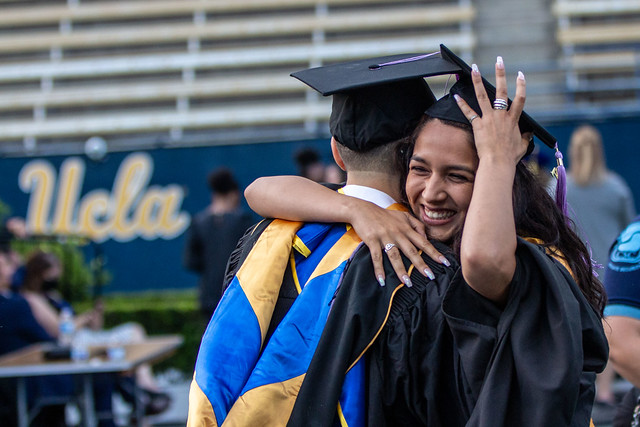 The American Planning Association is a national organization that aims to unite leaders and professionals across the field of planning. Every year, the organization’s Los Angeles section recognizes the outstanding work, best practices and thought leaders that impact the built and natural environment in Los Angeles County.— Zoe Day

A new book by Sanford Jacoby of UCLA Luskin analyzes the reaction of the U.S. labor movement to financialization over the past half-century. In “Labor in the Age of Finance: Pensions, Politics, and Corporations from Deindustrialization to Dodd-Frank,” Jacoby describes financialization as a transformative economic and political force that has ebbed and flowed over time. “It was, and is, associated with inequality and with robust stock markets,” said Jacoby, distinguished research professor of management, public policy and history. “Financialization waxed during industrialization, waned during the New Deal and expanded again under neoliberalism.” Jacoby noted that labor unions in the United States have shrunk since the 1970s, as has their economic clout. Jacoby’s study focused closely on the relationship between workers and shareholders who, by the 1990s, were dominated by large institutional investors such as pension plans, mutual funds and exchange-traded funds, or ETFs. He explained that the vast holdings of public corporations, and the ability to coordinate their interests, changed the balance of power: less for workers and unions, but more for investors. “The irony is that unionized workers are more likely to be covered by traditional pension plans,” he said. “It was through these plans that labor sought to bolster its organizing and political power, and, sometimes, to check the influence of corporate executives.” The power of shareholders to extract value from firms was, and remains, a key source of income and wealth inequality, Jacoby observed. But the recent political atmosphere has changed the dynamic among investors, executives and workers, he said. For more than 40 years, the winners have been executives and owners — sometimes both, sometimes only one of them. “Workers usually have lost,” Jacoby said. “If they are to gain a fair share, they will need help from unions, and unions will need help as well.”

The UCLA Alumni Association hosted a virtual ceremony to honor Meyer and Renee Luskin, Wilfred “Bill” Coggins MSW ’55 and other Bruins whose service to UCLA and the world have made a great impact. UCLA Chancellor Gene Block introduced a video segment (beginning at minute 40:17) featuring the Luskins, the 2020 Edward A. Dickson Alumni of the Year, UCLA’s highest alumni honor. “For as long as I’ve had the pleasure of knowing the Luskins, they’ve always credited UCLA with giving them their start,” Block said of the couple, first-generation college students who are now major benefactors of UCLA and namesakes of the UCLA Luskin School of Public Affairs. Meyer Luskin earned a bachelor’s degree in economics in 1949, then went on to launch Scope Industries, which recycles bakery waste to make an ingredient in animal feed. Renee Luskin earned a bachelor’s degree in sociology in 1953. The Luskins said their parents came from modest means but emphasized charity and philanthropy. “We wanted to have the pleasure of helping people,” Meyer Luskin said. Paco Retana ’87, MSW ’90 introduced Coggins (beginning at minute 27:10) and paid tribute to his decades of stewardship of the Kaiser Permanente Watts Counseling and Learning Center. Retana called Coggins “the heart and soul of the center,” which helps families achieve academic and personal success. “I believe in education. I believe in self-actualization. I believe in human potential,” said Coggins, who received the UCLA Award for Community Service. The May 22 virtual ceremony recognized several recipients of the 2020 alumni awards, which were announced last year.

A UCLA team has developed a predictive model that pinpoints which populations in which neighborhoods of Los Angeles County are most at risk from COVID-19 and, by extension, which should be prioritized for vaccines. The research – COVID-19 Medical Vulnerability Indicators: A Predictive, Local Data Model for Equity in Public Health Decision Making – is published in the peer-reviewed International Journal of Environmental Health. With more than 10 million residents, Los Angeles County has a larger population than 41 U.S. states. While many have been vaccinated, others in neighborhoods and communities at high risk of COVID-19 must be reached to fully re-open Los Angeles County, the authors said. The model maps the county neighborhood by neighborhood, based on four indicators known to increase an individual’s vulnerability to COVID-19 infection: preexisting medical conditions, barriers to accessing health care, built-environment characteristics and socioeconomic challenges that create vulnerabilities. The research data demonstrate that neighborhoods characterized by significant clustering of racial and ethnic minorities, low-income households and unmet social needs are still most vulnerable to COVID-19 infection, specifically areas in and around South Los Angeles and the eastern portion of the San Fernando Valley. Communities along the coast and in the northwestern part of the county, which have more white and higher-income residents, were found to be the least vulnerable. The study was co-authored by Professor Paul Ong, Chhandara Pech and Nataly Rios Gutierrez of the Center for Neighborhood Knowledge at UCLA Luskin and Vicky Mays, a professor with the UCLA Fielding School of Public Health and UCLA College.

Continuing a longstanding Luskin School tradition of closing out the academic year with a spirited competition, students, alumni, faculty and staff came together to test their knowledge of pop culture and arcane UCLA facts at Virtual Trivia Night 2.0. Alumni turned out in force, making up more than half the total participants, said Tammy Borrero, UCLA Luskin’s director of events. With COVID-19 precautions in place, the May 27 contest again took place on a digital platform, and some participants gave a nod to the times we live in with team names such as “Nerd Immunity” and “None the Pfizer.” The top prize in the individual competition went to U.S. Foreign Service Officer Jason Vorderstrasse, UCLA’s diplomat in residence for the 2021-22 academic year. Public Policy students and alumni made up the top-scoring team, giving the department an edge in overall standings since the tradition began in 2013. The winners earned cool prizes, bragging rights and their names emblazoned on the UCLA Luskin Quiz Bowl trophy.

Team departmental standings over the years:

Contestants compete for cool prizes and bragging rights at the individual trivia competition.

Isaac Bryan MPP ’18 is the newest member of the California Assembly. Bryan took his seat May 28 after winning a special election to represent the state Legislature’s 54th District, which includes Westwood, Culver City, Baldwin Hills and parts of South Los Angeles. “I didn’t get here by myself. I carry with me the passion, the dreams and the hopes of an entire community,” Bryan said after he was sworn in by Assembly Speaker Anthony Rendon. Bryan most recently served as the public policy director of the UCLA Ralph J. Bunche Center for African American Studies. In 2020, he co-chaired the campaign for Measure J, which allocates nearly $1 billion of Los Angeles County’s annual budget to address racial injustice through community investments and alternatives to incarceration; the measure passed with 57% of the vote. While at UCLA Luskin, Bryan was named a David Bohnett Foundation Fellow in the office of Los Angeles Mayor Eric Garcetti and also worked with the Bunche Center’s Million Dollar Hoods research project, which documents the fiscal and human costs of mass incarceration in Los Angeles. In a UCLA Luskin profile, Bryan shared glimpses of his personal journey to becoming an advocate for criminal justice — and now, at age 29, the elected representative for the community surrounding UCLA. “Los Angeles, in my mind, is the city for innovation, the city for trying new things, and if you can solve a problem in Los Angeles, you can take it everywhere else,” Bryan said in a video accompanying the profile.

New reports from the UCLA Luskin Center for Innovation show that the local knowledge, partnerships and established trust that underlie Transformative Climate Community (TCC) partnerships have allowed them to identify changing needs and respond quickly during the pandemic. These responses were bolstered by government-funded community engagement plans that offer leadership opportunities that tackle community goals around climate action and resiliency. TCC was established by the California Legislature in 2016 to provide funds to the state’s most disadvantaged communities while simultaneously reducing pollution, strengthening the local economy and improving public health through community-based projects. Cap-and-trade dollars have funded the first three rounds of the program under the direction of the California Strategic Growth Council, and Gov. Gavin Newsom’s current budget proposal includes $420 million for TCC implementation and planning grants over three years. The latest round of reports by UCLA document the progress of TCC grants in four sites: Fresno, Ontario, Watts/South L.A. and Northeast Valley L.A. A fifth site, Stockton, will soon be added to UCLA’s TCC evaluation cohort. “We can learn a lot from these five living laboratories for holistic climate action,” said Professor JR DeShazo, principal investigator on the ongoing study and director of the Luskin Center for Innovation. “It’s impressive,” said Jason Karpman MURP ’16, project manager of UCLA’s TCC evaluation. “During a year when so much has come to a halt, these initiatives have continued to quickly adapt and meet the needs of residents.”