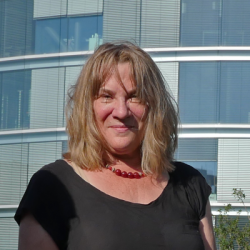 Dr. Hecht’s research focuses on the intersections of economies, cultures and land use, and the socio-environmental effects of these processes, an approach now widely known as political ecology.

Her focus area is the Latin American tropics, and more specifically Amazonia. Her research has major implications for understanding the dynamics of land use change and what they imply about human relations with nature, economies and tropical development. Her work includes analytics on climate change, mitigation and longer-term rethinking of longer-term strategies under globalization, intense migration and novel climate dynamics.

Her work has forged new understandings in the development of political ecology including that of deforestation and forest recovery, the “social lives of forests” as part of environmental history as well as current practices. These include the analysis and viability of traditional tropical land use practices such as agroforestry and the creation of Amazonian black earths (a legacy of and continuing practice by many indigenous populations as well as Amazon peasants). Her early work on indigenous anthropogenic soils was groundbreaking, as it documented how in fact these soils, the product of biochar–and low temperature fires— were produced. She also studies the impacts of migration on forest and land use. In addition to these more arcane systems, she has carried out extensive research on the livestock sector, analyzed in her book Fate of the Forest, and soy economies in Latin America (the main deforestation drivers) and has just edited a major themed issue on this topic for the Journal of Peasant Studies, the top ranked rural development journal.

Dr. Hecht’s interest in alternatives to deforestation involved engagement in the analytics of non-timber forest products and their development, including extractive reserves, which now cover more than 10 million Ha in the Amazon Basin and reflect the outcome of new institutions under the pressure of social movements of traditional peoples of various kinds. She has also paid attention to the gender implications that inhere in land use change from the most remote peasantries in the upper Amazon, to highly linked in central American women farmers whose family members reside in the US.

Forest resurgence in the tropics is now a widely documented phenomena but her work in this area more than a decade ago was landmark.

Through complex analyses that range from Forest transition theory, global markets, agrocecology and the foucauldian politics of governmentality, the widespread occurrence of forest recovery suggests a huge realm of new policy interventions and practices for this largely orphaned segment of forest dynamics. These questions are explored in two of her edited books. The Social Lives of forests, edited with ethnobotanist Christine Padoch and ethnoarcheologist Kathleen Morrison explored the ideologies, environmental histories, and current practices and processes that produced forests in the present day and in the past. Under current conditions forest recovery and control of clearing will be essential to any climate policy. This book thus shows how a complex range of activities—using global examples from the top scholars in a range of disciplines — have produced both livelihoods and forested landscapes. Another edited volume explored the questions of migration, resources and rural livelihoods with colleagues from the Central American policy and research NGO, PRISMA setting the stage for continuing research on the dynamics of migration. urbanization and land use, and their implications for forests and forest dependent populations.

Finally, her research focuses on historical ecology and environmental economics. Her book, The Scramble for the Amazon, won the American Historical associations Best Book in Environmental history Award in 2015, and her earlier volume, Fate of the Forest also won multiple awards. The key to these books is their use of the “natural archive” as well as the human one. Dr. Hecht’s rigorous historiography and scientific training coupled to rich and fluid prose have made her books academic best sellers. She is at work on the third volume for this trilogy on contemporary Amazonia

Using archival research, remote sensing, palynological data and forest census materials Dr. Hecht has been engaged in the analysis of “Deforestation” before modern Deforestation: that is understanding the nature and social dynamics of forest change over time including carbon loss and uptake in Amazonian ecosystems 100 years ago. These researches feed into an understanding of landuse change under current regional development scenarios and most especially the questions of the global carbon economy.

Dr. Hecht is a member of Princeton’s Institute for Advanced Study, and holds a Professorial appointment at the Graduate Institute for Development Studies in Geneva.

The Social Lives of Forests
Subtitle: Past, Present, and Future of Woodland Resurgence
Publisher’s webpage
Review in Science

The Scramble for the Amazon and the Lost Paradise of Euclides da Cunha
University of Chicago Press.
Purchase on Amazon.com
Reviewed in The Nation

The Fate of the Forest: Developers, Destroyers, and Defenders of the Amazon
Purchase on Amazon.com