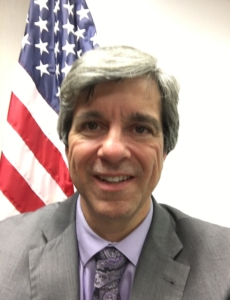 Dylan Presman is Budget Director for the Cybersecurity and Infrastructure Security Agency (CISA) within the U.S. Department of Homeland Security. In this role, Dylan oversees NPPD’s $2 billion budget.

Dylan joined the U.S. Department of Homeland Security (DHS) in May 2009, working initially in the Budget Division of the Office of the Chief Financial Officer before moving over to CISA in 2017.  Dylan served in a number of positions at DHS before joining CISA including as Assistant Director of Budget, overseeing the budgets of Customs and Border Protection (CBP) and Immigration and Customs Enforcement (ICE), as a congressional liaison for the Budget Division overseeing relations with the appropriations committees, and as the Budget Division Desk Officer for the U.S. Citizenship and Immigration Service.

Prior to joining the federal government, Dylan served as Executive Director of the United Nations Association-USA, a nonprofit organization focused on education and advocacy on international issues. In that position, he led delegations to the 4th World Conference on Women in Beijing in 1995 and the 2nd World Conference on Human Settlements in Istanbul in 1996.

In June 2016, Dylan earned a Masters of Science in Government Leadership from the National Defense University. Dylan previously earned a Masters in Public Policy from UCLA and a B.A. in Middle Eastern Affairs from the University of Durham in England. Dylan also studied at Alexandria University in Egypt and Jerusalem University in Israel. Mr. Presman is married and has two children, Sarai, 23, and Henry, 20. Mr. Presman recently added DHS Chief Financial Officer “2019 Awards for Excellence”  and cancer survivor to his list of achievements.