The conference included a lunchtime performance by the teenage dancers from Ballet Folklórico de Esperanza, which is a new dance program at Esperanza College Prep, a public charter school in East Los Angeles. Director Ignacio Delgado participated in Grupo Folklórico de UCLA while an undergraduate student at UCLA. Photos by Les Dunseith

This Cinco de Mayo, more than 100 social services professionals chose to spend their holiday at UCLA Luskin, listening to speakers and participating in workshops during a student-organized conference designed to promote best practices for professionals who work with California’s Latinx community.

“We are here to change the narrative and show everyone that the Latinx community is more than documentation status, more than level of education or accents or skin color,” said Sergio Serna of the Social Welfare field faculty during his welcoming remarks. “Let us together shine the spotlight through collaboration and collective action and show others that the Latinx community is made up of people with stories and families and dreams.” 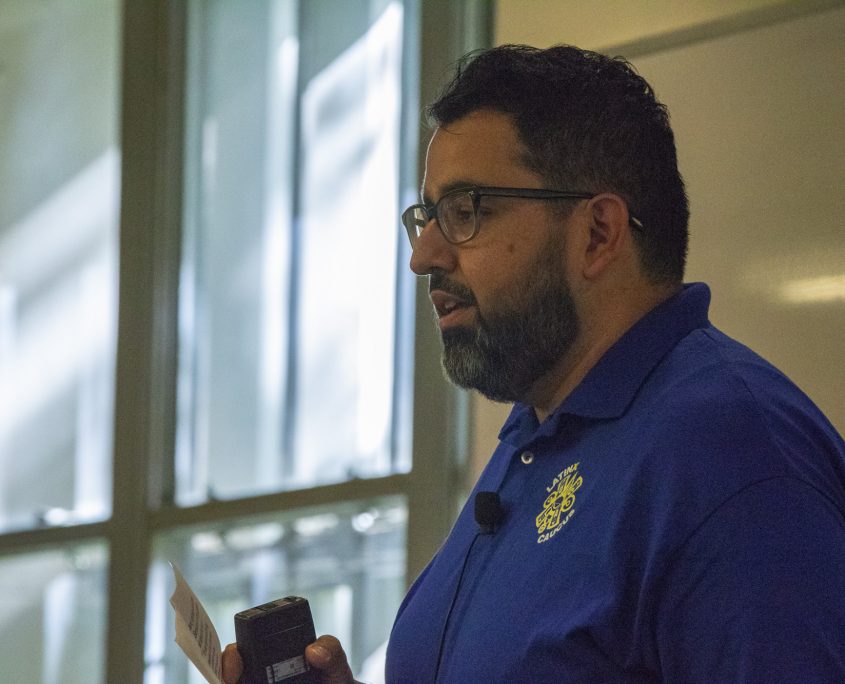 “We are here to change the narrative and show everyone that the Latinx community is more than documentation status, more than level of education or accents or skin color.”

Serna serves as one of the faculty advisers for UCLA Luskin Social Welfare’s Latinx Caucus, a student organization that organizes the Social Services in the Latinx Community Conference each year. Sonia Maldonado, a second-year Master of Social Welfare student and one of the three co-chairs of the Latinx Caucus, formerly known as the Latina/o Caucus, said the 16th annual conference was the culmination of a monthslong process.

“That’s especially true with the grants,” Maldonado said, noting that applications for competitive grant funding are often due early in the academic year. “The grants really push you toward planning ahead.”

Putting together the conference is a rewarding experience for the students, but it’s also time-consuming and sometimes stressful. Co-chair Janette Zuniga, also a second-year MSW student, said the 12-member board of the Latinx Caucus had to work together as a unit and identify roles that would allow each organizer an opportunity to excel.

“It’s important to respect each other’s knowledge and each other’s gifts that one brings to the table. Not everyone is going to be good at public speaking,” Zuniga said. “But if you’re good friends with each other in the first place, then you’re able to use that to work better together to have an end result that is a good one.” 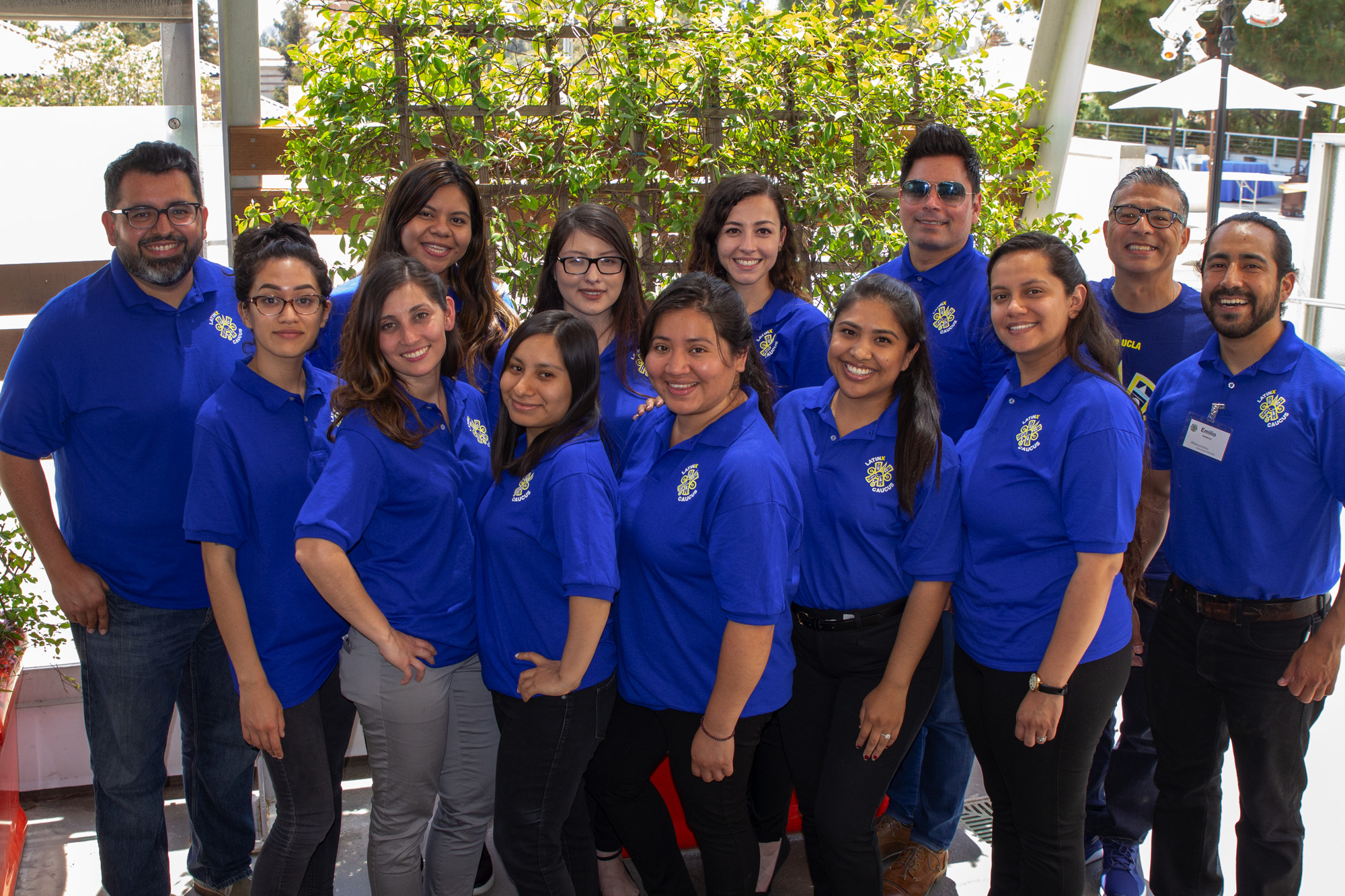 This year’s guest speakers included UCLA Luskin alumni and students, plus social services professionals. In all, nine workshops took place during the day, with titles such as “Ethnic Differences in Clinical Presentation of Depression in Adult Women,” “Urbanization and its Impact on Latino Communities” and “Understanding Sex Trafficking Within the Latinx Community.”

Maldonado said that it’s important for individual organizers to identify the topics that are most important to them — to find their passion.

“We are a big group, and there are a lot of issues that could be included, and it can be really hard to narrow it down to finalize the program,” Maldonado explained. “It helps for the leaders to really hone in on their passion and to focus their efforts to get the things they care most about onto the agenda.”

The keynote speaker was Manuel Criollo, a highly regarded community organizer who is this year’s activist-in-residence at UCLA Luskin. He built his presentation around the fact that this year’s conference happened to fall on May 5 — Cinco de Mayo — and reminded attendees that the holiday celebrates Mexico’s battle for independence.

Latinx people have their own battles to fight today, Criollo said, and he organized those battles into three broad categories.

“The first is the battle of what we are really confronting,” he said. “It’s important for us to really understand it. If we don’t, then it’s easy to fall into blaming the individual — ‘you didn’t try hard enough; you didn’t really want it.’ We have to first understand the crisis that we are confronting.” 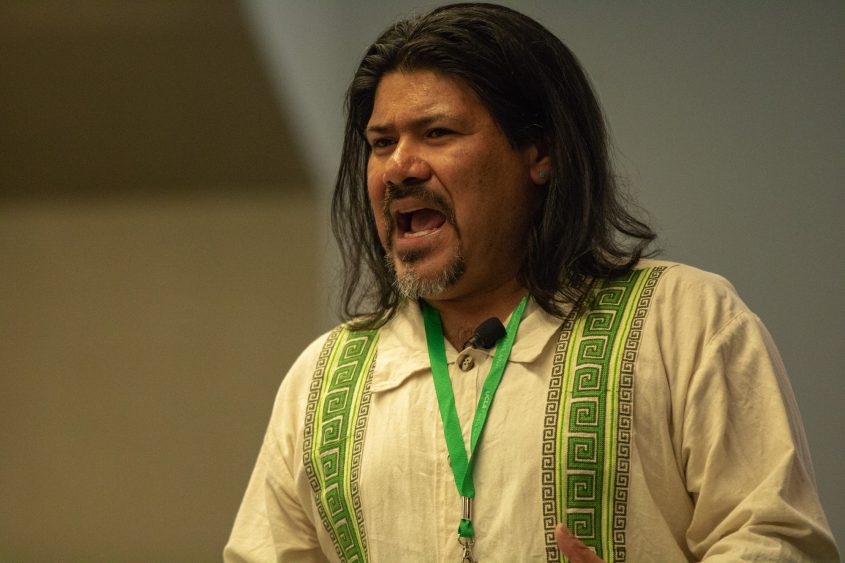 “As we become the majority in this country, where are we as a people? … What are the values that we are going to embrace?” — Manuel Criollo, 2018 UCLA activist-in-residence

His second category was the battle of “our own consciousness. This is really key for us as Latinx people,” Criollo said. “As we become the majority in this country, where are we as a people? Where are we going to fall on a lot of important issues — about racism, about sexism, about patriarchy, about homophobia, about the structural problems of this society? What are the values that we are going to embrace?”

He described his third category as a battle for ideas. Directly addressing the professional and student social workers in the room, he noted: “You guys are on the front lines, and you can support movements that are trying to end these systems of inequality.”

Criollo suggested several ideas for change in need of support, including addressing the scarcity of affordable housing and resisting changes to public transit that negatively impact lower-income people.

He also mentioned his ongoing research into the impact of school policing on youth, noting that the Los Angeles Unified School District spends about $70 million each year on school policing — a figure that far exceeds what is spent on nursing or the arts or counseling.

“Imagine what it means for a society that it is investing more in policing our children than in providing avenues of support for them,” Criollo said. Youth need “counselors, not cops.”

The value of counselors in a healthy society was a recurring theme during the day.

“Social work in itself is a giving profession, and it’s also about teaching and educating and working with different types of populations,” Zuniga said. “Our conference is parallel to the social work mission of working with different types of communities — bringing people together and educating them about issues that affect vulnerable populations.”

Field faculty member and Latinx Caucus co-adviser Hector Palencia MSW ’08 told the crowd that they should take great pride in the important work they do. 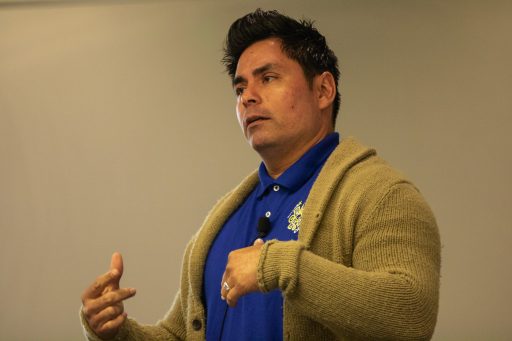 “You openly give that time — the most valuable thing that you have — to them as individuals, day in and day out. How inspiring is that?” — Field faculty member Hector Palencia

“You work with people that most people don’t want to work with — people who are ostracized, are demonized and are pushed to the outskirts of society,” Palencia said. “What do you do? You view their lives with dignity.”

In his view, there is no better gift that a person can give to another than time.

“And isn’t that what clients need the most?” Palencia said. “Time for their loved ones. Time to work. Time for resources. Time to be heard. Time to mourn loss. And you openly give that time — the most valuable thing that you have — to them as individuals, day in and day out. How inspiring is that?” 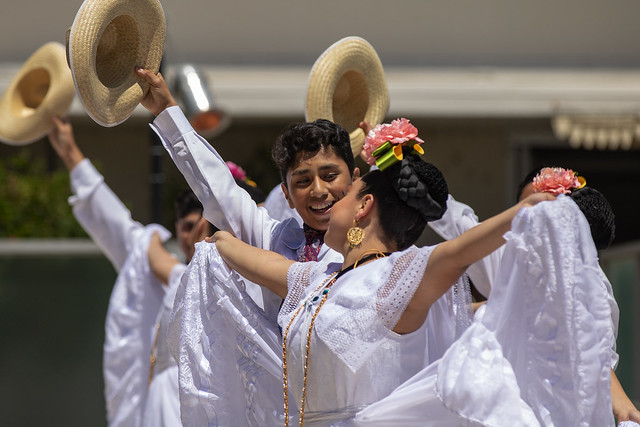