UCLA Luskin is home to a renowned Social Welfare doctoral program, one that focuses on independent research and interdisciplinary studies in order to produce top scholars and researchers. “Our doctoral program offers students the opportunity to pursue an independent line of study,” says professor Laura Abrams, chair of the doctoral program. “Although we are a small program, we focus on each individual student so that they are able to pursue these diverse interests and become leaders and scholars.” Among many notable achievements by both students and faculty, the following Social Welfare students were recently recognized for their research and work.

Two students had the opportunity to present academic papers at the Society for Social Work and Research conference in San Antonio. Gina Rosen presented a paper on “Determinants of Employment: Impact of Medicaid and CHIP among Unmarried Female Heads of Household with Young Children.” For her research, Rosen analyzed how social welfare programs impact the employment choices of low-income single mothers with young children (particularly under the age of six). Rosen explains that her childhood in Milwaukee, a city with high rates of inequality and segregation, inspired her to study policy issues in college and graduate school. “I wanted to look at these equality and fairness issues and how to correct them through public policy,” says Rosen. Her work was also recently accepted for publication in the journal Social Work in Public Health.

For the same conference, Christina Tam presented two papers on juvenile delinquency. For her first paper, “Gender Differences in Desistance from Crime: How Do Formerly Incarcerated Emerging Adults Use Social Supports?” Tam worked closely with Professor Abrams on the subject of transition to adulthood among formerly incarcerated young people, ages 18-25. This study analyzes youth transitioning out of juvenile justice and foster care systems. “I am interested in better understanding their experiences, as well as the practices and policies that may help these young people to cross this significant bridge,” explains Abrams.

Tam’s second project, and the subject of her dissertation, is a quantitative study on the overrepresentation of Southeast Asians in the American justice system. Her paper focuses on the acculturation of immigrant Cambodian families that have survived trauma and violence and how these changes affect rates of incarceration for their youth. Tam explains, “[I chose this group because] as a small population with a high amount of incarcerated youth, they are an understudied group in America.” Tam’s interest in the justice system stems from her undergraduate days as a Psychology and Criminology student at UC Irvine, and she describes her current research as “a good melding of all my interests, especially with studying second-generation Asian Americans.”

Matthew Mizel is also working closely with Professor Abrams on issues relating to incarcerated youth. Mizel first developed an interest in helping these youth through a volunteer teaching program in juvenile hall. “In 2003, I began teaching creative writing as a volunteer to incarcerated youth, and through the years my passion for that grew,” Mizel relates. “I eventually wanted to spend more of my time making an impact, and I decided the best way to do that was getting my Master’s and Ph.D.” For his research, Mizel conducted a systematic review on the use of mentoring programs as intervention for formerly incarcerated youth. He worked with Abrams to submit his research to the Journal of Evidence-Based Work, which was accepted last summer. “I learned a great deal from working with Professor Abrams. She helped me grow as a researcher and social welfare scholar,” says Mizel. “I ultimately want to become a professor in the future, and UCLA Luskin is helping me get the training and knowledge I need.”

While Tam and Mizel work with Abrams on youth incarceration, a few students also collaborate with Ian Holloway, Assistant Professor in Social Welfare, to research the social determinants of HIV/AIDS. “HIV is a major public health issue,” comments Holloway. “We’ve made tremendous progress in terms of preventing the virus in certain populations like mothers and infants. Now it’s important to address health disparities in sexual minority communities and racial ethnic groups disproportionately affected by HIV.” Holloway’s current research focuses on analyzing the social networks of HIV positive men in Los Angeles in relation to their well being and health, as well as developing a mobile smartphone application to encourage HIV testing and treatment among young African American gay and bisexual men (a heavily impacted demographic).

Shannon Dunlap is one of four students currently working with Professor Holloway on his social network research. “We’re using an informative survey to assess social networks of different people affected by HIV,” explains Dunlap. “We want to know how many people are in their social network, who they talk to, and how their social network supports them.” Outside of her studies, Dunlap also works with AMP!, a UCLA Art & Global Health Center program that aims to educate students about HIV through song, dance, and personal stories. “I’m looking at how [AMP!] impacts students and their social networks, along with how well the message has been received,” says Dunlap.

For fellow student Lesley Harris, HIV research led her on a journey to Vietnam to conduct a three-year field study. A country with traditionally underreported rates of HIV and a large population of young adults who are injection drug users, Vietnam is a key location to study the medical and social effects of HIV/AIDS. Harris’ studies focus on the relationship between children who have lost their parents due to AIDS and their grandparents, who consequently become the caretakers. By examining the effects of HIV on family dynamics, Harris also hopes to understand the greater social context surrounding the HIV epidemic in Vietnam. “Health is something that is socially constructed,” explains Harris. “The grandparents in Vietnam understood AIDS as a social evil, not a health issue.”

While conducting her field study, Harris also began to notice the importance of her relationship with her interpreter, a Vietnamese local. “Without an interpreter, it’s hard to bridge the cultural disconnect,” says Harris. “My interpreter actually had his own interpretation of the data, by looking at it through a Vietnamese lens.” As researcher-interpreter relation is not a frequently studied topic, Harris began work on a separate paper analyzing her close relationship with her interpreter and how it affected her understanding of the research. The resulting product, “Working in Partnership with Interpreters: Studies on Individuals Affected by HIV/AIDS in Vietnam,” was recently published in the Qualitative Health Research journal. Lesley is currently preparing for her final defense of her dissertation (chaired by emeritus professor Ted Benjamin) and is beginning a job as an assistant professor at the University of Louisville’s Kent School of Social Work in the fall.

While each Social Welfare student’s interests and research varies widely, their combined achievements serve to bring new insight and perspective to the field. “The Social Welfare program has a unique mix of scholars interested in society’s most pressing issues,” says Holloway. “Many of these issues intersect, and what’s been most exciting for me is that there is a lot of encouragement of interdisciplinary collaboration both within the school and within the larger university.” As the doctoral program continues to foster the development of innovative and interdisciplinary scholars, there may be more achievements in store for the students of Social Welfare. 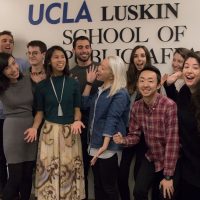 Social Welfare student to present at the Summer Colloquium for Social, Economic and Environmental Equity
0 replies

New Framework Debuts for Preventing Technology-Facilitated Exploitation of ... Study Shows Access to Cars Important for the Poor
Scroll to top