Diplomats in Residence (DIRs) are a select group of career Foreign Service Officers and Specialists located throughout the U.S. who provide guidance and advice on careers, internships and fellowships to students and professionals in the communities they serve, according to the U.S. State Department.

She replaces Michelle Los Banos (Diplomat in Residence in 2014-2015) who was recently recalled to a new assignment in Washington, D.C.

Martinez is a media and communications professional with 13 years of international and domestic experience in the U.S. diplomatic service. She most recently worked as Deputy Press Attaché at the U.S. Embassy Mexico City, one of the largest U.S. diplomatic missions in the world, and led her team in crafting messages for one of the United States’ most important bilateral partnerships.

Before coming to Mexico, Melissa served as the Director of the Media Hub of the Americas for Latin American and Caribbean media based in South Florida. She fostered new partnerships with the academic community, civil society, and private sector in Miami and throughout the Americas to advance policy outreach for senior U.S. officials.

In 2002, Melissa received a Master’s degree from Columbia University’s School of International Public Affairs where she was a Thomas R. Pickering Foreign Affairs Graduate Fellow and National Security Exchange Program International Graduate Fellow. She earned a Bachelor of Arts from New Mexico State University in 1999. Born and raised in New Mexico, Melissa is fluent in Spanish and has studied Portuguese and Italian.

For more information on U.S. State Department programs or to inquire about office hours, please contact Martinez at mmartinez@luskin.ucla.edu) or her UCLA campus phone number 310-206-2552. 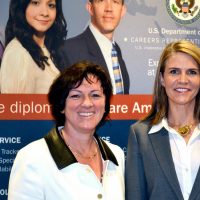 A Voice from the ‘Eye of the Storm’
0 replies