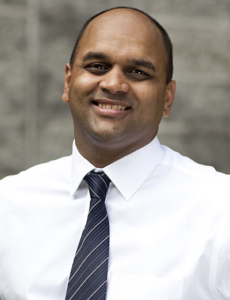 Dr. Manan Trivedi is an internal medicine physician with over 20 years of experience in clinical medicine, health policy research, strategic communications and healthcare advocacy. He has held leadership roles in academic, military, political and public and private sector settings.

A former Navy Officer, Dr. Trivedi served as the medical team commander for the first ground troops to enter Iraq in 2003. He oversaw the care of over 1,500 forward deployed Marine Corps and Naval forces as well as civilians and enemy prisoners of war and treated over 300 trauma injuries as the first physician on scene. For his service, Manan earned the Combat Action Ribbon and his unit was awarded the Presidential Unit Citation.

As a VA health services researcher in 2006, Dr. Trivedi drew attention to PTSD and other mental health issues among OEF and OIF veterans via qualitative studies that helped shape Veteransʼ mental health policy.

And while serving with the Navy Surgeon General as the Department Head of Emerging Health Policy, he focused on cost containment in the Military Healthcare System (MHS) and led the $2.5 million evaluation of the medical home primary care system and all clinical aspects of the development of the $18 million operational injury and treatment model used for Navy casualty prediction and vulnerability testing.

He was the Democratic Nominee for Congress in Pennsylvania’s 6th district for 3 consecutive cycles. In his campaigns, he fought for strong healthcare and social justice platforms and led the charge in advocating for evidence-based policy solutions.

Dr. Trivedi also has extensive experience in clinical hospital medicine in academic and tertiary medical centers and with larger healthcare systems including Kaiser Permanente. In addition to his role as President of the National Physician’s Alliance, Dr. Drivedi currently works as a hospitalist in the metropolitan Washington, D.C. area and lives with his wife, Surekha, and his two daughters, Sonia and Ashmi.

2009 MPP Alumna of the Year
Scroll to top