A Conversation With David Simon

A Conversation With David Simon Luskin Lecture Series features the journalist, screenwriter and producer discussing the great divide in the ‘two Americas’

David Simon uses those words often as he describes what’s become of America, or, as he puts it, our “two Americas.”

Simon, a former police reporter for the Baltimore Sun who left the paper and became a successful television screenwriter and producer, was the capstone of the two-day inauguration of the Institute on Inequality and Democracy at UCLA Luskin. His keynote address at UCLA’s James Bridges Theater was part of the Luskin Lecture Series.

The event also featured a screening of one episode of the Simon-penned HBO series “Show Me a Hero.” Simon is perhaps best known for his critically acclaimed series on HBO, “The Wire.”

“‘The Wire’ showed us that the court of law, the police station, the city bureaucracy are as much a part of the game as the street,” said Ananya Roy, director of the Institute on Inequality and Democracy, who introduced Simon. “And the game, as the line in ‘The Wire’ goes, is rigged.”

Simon’s themes and messages, conveyed through his writing and television shows, reflect in many ways the mission of the new institute.

“How do we do a better job of living together?” Roy asked. “This is a question that animates David Simon’s work. How do we live together in the context that David Simon has described as two separate Americas? Simon’s artistic and journalistic work reminds us that the creation of these two separate societies is by will. It’s by policy, by plan.”

Simon’s lecture was titled “The Audacity of Despair,” which also happens to be the name of his blog, a self-described collection of “prose, links and occasional venting from David Simon.”

During his Luskin Lecture, Simon covered a broad range of topics, from politics to activism to police. And, yes, he did a little venting. 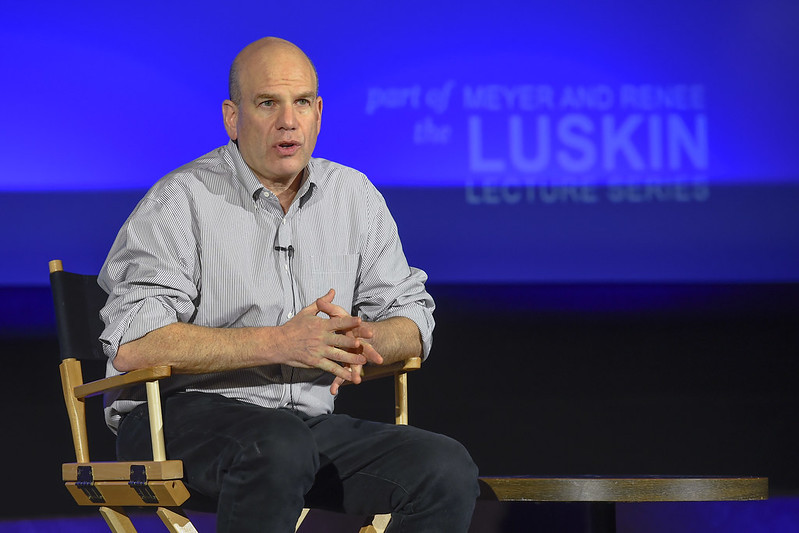 “Nothing quite works in this very complicated and tragic and rigged system, if you believe that one singular ideology gets you out of every problem,” Simon said. “I think that one of the great plagues of our age is that right now there are any number of people — and I think we are witnessing it in this election cycle — who think they can explain what ails us and why we are so fractured, in a single paragraph.

His experience as a newspaper journalist informed his screenwriting, and his views about policing, as well as the war on drugs.

“I know a lot of good cops who will tell you that the drug war destroyed us,” Simon said. “They sold us this drug war, and we committed our resources to it, and we bought it.”

“When we are talking about the drug war, law enforcement issues and mass incarceration, I ask the question of whether or not poor communities are over-policed or under-policed,” he added. “The consensus was over-policed. It’s complicated. It’s in the complications that we lose ourselves.

Simon also reflected on his experiences while covering the police in his hometown, Baltimore, and how not much has changed.

“I don’t believe in community policing,” he said. “If you want social work, hire a social worker. A good police department does one thing to make a city better. It figures out the right guy to arrest, and it takes him off the corner. If you get killed in Baltimore, you will not be avenged, and your family will not be avenged. But, more than that, the guy who killed people will still be standing on the corner with a gun. And he’ll do it again.”

Simon, who also wrote the television series “Treme,” which aired for four seasons on HBO, put a lens on democracy, and how it’s changed.

“(Winston) Churchill said democracy is the worst form of government, until you consider every alternative,” Simon said. “I think my critique would be, what’s fallen by the wayside, what we’ve permitted to become a shell of democratic ideal, because we’ve been able to construct these two Americas where the rules can be applied differently. That has to be deconstructed.”

Simon closed by issuing a challenge to all attending the lecture, saying that a simple act of civil disobedience would help bring an end to the war on drugs.

“If you are asked to be on a jury, on nonviolent drug use, and they ask you to send another human being to prison because of this disaster of a drug policy, acquit. No matter what the evidence is, acquit,” Simon said. “Search your conscience. Is my country really going to get better for putting another person in prison for nonviolent drug use? Does that make America stronger or weaker?”

Inaugurating the Institute on Inequality and Democracy at UCLA Luskin