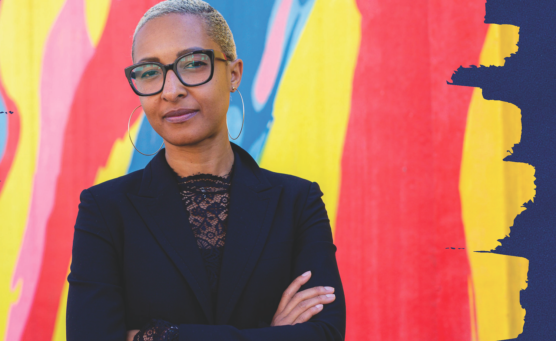 “My talk focuses on the spontaneous production of graffiti art and murals covering the entrances of businesses in Downtown Oakland, CA, in the wake of recent global protest movements against state violence and systemic racism. I argue that the art makes legible what gets hidden through the violent processes of gentrification and neoliberal urbanism. What is revealed through the art is the convergence of two co-constitutive publics—a segregated, decaying city mostly inhabited by poor and working-class Black and Latinx residents and laborers, and a modern, prosperous, neoliberal city that caters to a privileged class of white residents and tourists—especially as the city grapples with the management and regulation of public space in the midst of the COVID-19 global pandemic.”

Brandi Thompson Summers is an Assistant Professor of Geography and Global Metropolitan Studies (GMS) at the University of California, Berkeley. She is also affiliated with the Center for Science, Technology, Medicine & Society (CSTMS). Her research examines urban cultural landscapes and the political and economic dynamics by which race and space are reimagined and reordered. She has published several articles and essays that analyze the relationship between race, power, aesthetics, and urbanization that appear in both academic and popular publications, including the New York Times, International Journal of Urban and Regional Research (IJURR), ASAP/Journal, QED, Public Books, and The Funambulist.

Dr. Summers is the author of Black in Place: The Spatial Aesthetics of Race in a Post-Chocolate City (University of North Carolina Press), which explores how aesthetics and race converge to locate or map blackness in Washington, D.C. In it, she demonstrates the way that competing notions of blackness structure efforts to raise capital and develop land in the gentrifying city. Her current book project is an interdisciplinary study that examines the complex ways in which uses of space and placemaking practices inform productions of knowledge and power. The project engages research by examining representations and experiences of space, place, and landscape in Oakland, CA across historical contexts.

Politics, the Presidency, and the Path Ahead
Scroll to top