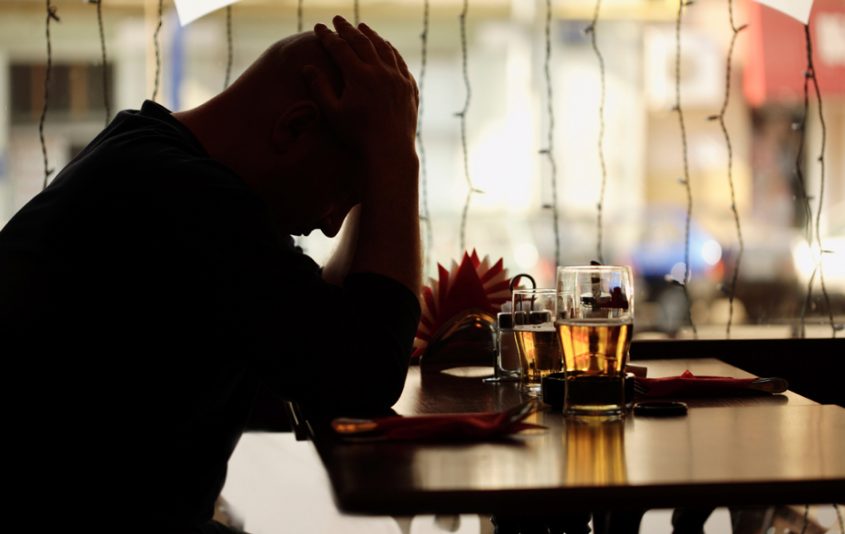 While economic downturns have been linked previously to increased suicide risk in the United States, new research from the UCLA Luskin School of Public Affairs sheds light on the role alcohol use may play in the complex relationship between economic conditions and suicide.

UCLA Social Welfare professor Mark Kaplan is lead author and principal investigator of a new study funded by the National Institutes of Health (NIH) and released online today. The report, “Heavy Alcohol Use Among Suicide Decedents Relative to a Nonsuicide Comparison Group: Gender Specific Effects of Economic Contraction,” will be published in the July issue of the journal Alcoholism: Clinical and Experimental Research.

In conducting the study, specifically on the contribution of alcohol to suicide during the 2008-09 recession period, Kaplan and colleagues used data from the U.S. National Violent Death Reporting System from 16 participating states and supplemented with data from the Behavior Risk Factors Surveillance System for the same states, which was used as the nonsuicide comparison group. Blood-alcohol levels in suicide decedents were compared to heavy alcohol use in the nonsuicide comparison group in the years 2005-07 (before), 2008-09 (during), and 2010-11 (after the recession).

Kaplan and colleagues noted that, in general, economic recessions have been associated with declines in overall alcohol consumption but at the same time with increases in heavy alcohol use, particularly among those directly affected by the contraction. In their current work, Kaplan and colleagues showed that the percentages of suicide decedents who were intoxicated at the time of death increased during the recent economic recession. What is unknown is whether this change in alcohol use prior to suicide mirrored patterns of heavy drinking in the general population.

In this new study, Kaplan’s findings show that, for men, alcohol involvement increased among decedents beyond what was observed in the general population, emphasizing the “heightened importance” of acute alcohol use as a risk factor for suicide among men during times of severe economic hardship. “Surprisingly, there is evidence that individuals intoxicated at the time of death did not necessarily have a history of alcohol abuse prior to suicide,” said Kaplan.

But similar results were not found for women who died by suicide. Kaplan suggests women may show resilience to the interaction of alcohol and financial crises, reporting that heavy alcohol use by women mirrored consumption in the general population.

He further explains how creative control policies have been shown to reduce the risk. Among those policies, Kaplan cites research on pricing strategies, including raising taxes and pricing beverages according to alcohol content. Also, easy access to alcohol — longer hours for alcohol sale or high density of alcohol outlets — may create more opportunity for impulse buying and thus contribute to suicide during economic downturns, Kaplan concluded.

And, citing recent research, Kaplan explains, “Not only are alcohol control policies important, but equally so is investing in the public health and social welfare infrastructure to minimize the adverse effects of future economic downturns, such as high unemployment and associated material deprivation.”

The full study may be found online at http://onlinelibrary.wiley.com/doi/10.1111/acer.13100/abstract

The findings are part of a three-year study funded by the National Institute on Alcohol Abuse and Alcoholism at the National Institutes of Health. Kaplan is the principal investigator of the project, which is a collaboration between UCLA, Oregon Health and Science University, Pacific Institute for Research and Evaluation (Oakland, CA), Centre for Addiction and Mental Health  (Toronto, ON), and the Pacific Health Institute (Emeryville, CA).

Mark S. Kaplan, Dr.P.H., is professor of Social Welfare at the UCLA Luskin School of Public Affairs. He holds an adjunct appointment in psychiatry at the Oregon Health & Science University. His research focuses on using population-wide data to understand suicide risk factors among veterans, seniors and other vulnerable populations. He is the recipient of a Distinguished Investigator Award from the American Foundation for Suicide Prevention and has contributed to state and federal suicide prevention initiatives.

Reflections on China and Urban Planning by a UCLA Legend