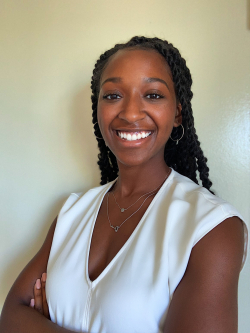 Taylor Reed was born in New York but raised in Dallas, Texas which gave her mixed perspective as to both the social and political aspect of how one’s race impacted their life experiences. She earned her Bachelor of Arts degree in Global Public Health and Sociology with a minor in Chemistry from New York University. As a Black first-generation American woman, Taylor learned the many ways in which systems operate against the success of not only women, but specifically Black women. Prior to attending UCLA, she worked on projects that examined violence throughout major cities in the United States and the impact of incarceration and community violence on Black people. Taylor also serves as a graduate research assistant at UCLA’s BRITE Center conducting research and preparing manuscripts for publication centered around incarceration and life hardships of Black men, as well as a researcher at NYU’s Silver School of Social Work where she is analyzing the conceptualization of trauma among racial minority youth exposed to community violence.

Taylor is currently a second-year doctoral student in the Department of Social Welfare at the UCLA Luskin School of Public Affairs. Her research focuses on analyzing how policies influence the re-entry experience of Black young adults from a life-course perspective. This includes studying the socioeconomic environment in which justice-involved Black young adults were raised. She hopes that her work will allow for policy makers and stakeholders to comprehensively understand what occurs in urban neighborhoods and identify vulnerable areas that can serve as intervention points to help mitigate recidivism rates and the likelihood of incarceration among community members. Additionally, she would like to determine how to design and scale up effective policies and programs that addresses the challenges of reentry by equipping Black young adults with the necessary tools to avoid recidivism.