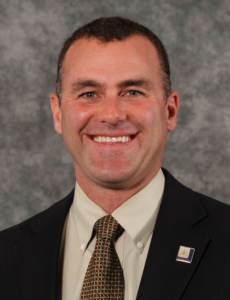 William R. “Rusty” Bailey III is a Riverside native who has served as Mayor of his hometown since 2012, having previously been a member of the City Council. His family came to Riverside in 1914 and has a long history of service to the community. Mayor Bailey is proud to be part of the fourth generation of Baileys working for the advancement of Riverside.

After graduating from the United States Military Academy at West Point with a degree in political science in 1994, Mayor Bailey worked in a variety of public service positions locally and in Washington, D.C. He is a 1999 graduate of UCLA’s Luskin School of Public Affairs, earning a Master’s Degree in Public Policy, and was named Alumnus of the Year in 2013.

Homeless solutions have been a major focus of Mayor Bailey, and through his leadership, our community together to proactively combat homelessness, resulting in outreach and enforcement efforts, coupled with housing expansion for those who are willing to accept services. As a result of his call to the faith based community to partner with the city in addressing homelessness, in 2018 Riverside opened the doors to the Grove Village, four barn-raised housing units coupled with strong community support provided by the Grove Community Church. This project is being looked upon nationally as a model approach.

Mayor Bailey’s many accomplishments include serving as a helicopter pilot, platoon leader, and Company Executive Officer in the U.S. Army, earning an Airborne Badge, and Air Assault Badge and an Army Aviator Badge; securing a two-year Presidential Management Fellowship; and working for the U.S. Department of Housing and Urban Development and the Executive Office of the President in Washington D.C. Mayor Bailey also served as a Legislative Aide for County Supervisor John F. Tavaglione and worked at the Riverside County Economic Development Agency. He spent more than a decade as a teacher at Poly High School in Riverside and served as a member of the City of Riverside’s Cultural Heritage Board.

Mayor Bailey lives in the Magnolia Center neighborhood of Riverside with his wife, Judy, a former elementary and middle school teacher, and his two daughters, Elizabeth and Julia. He is an active member of his church, a mentor to young people and can often be seen cycling around the city with his family.

2012 MPP Alumna of the Year
Scroll to top