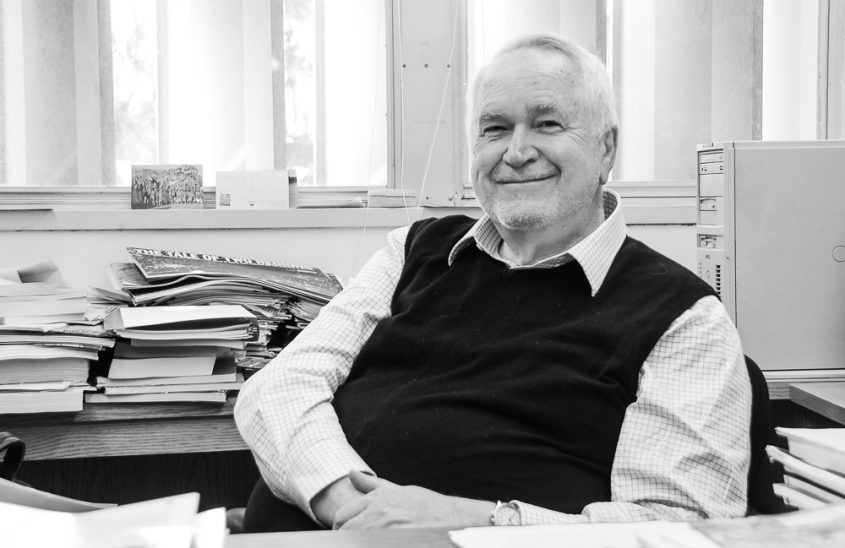 Dr. Soja was born in New York in 1940. He earned his Ph.D. in Geography from Syracuse University and began his career as a specialist on Africa at Northwestern University. After being recruited to UCLA in 1972, he began focusing his research on urban restructuring in Los Angeles, as well as the critical study of cities and regions. His interests were wide-ranging, including questions of regional development, planning and governance, and the spatiality of social life.

“Ed was a towering figure in the fields of urban planning and the social sciences and a strong force in the Department of Urban Planning for almost 40 years,” said Evelyn Blumenberg, Professor and Chair of Urban Planning. “His insight, wit and leadership will be greatly missed.”

His numerous publications, as writer, editor and collaborator — with fellow UCLA Urban Planning faculty, scholars from across the United States and around the world — include, Thirdspace: Journeys to Los Angeles and Other Real-and-Imagined Places (1996), The City: Los Angeles and Urban Theory at the End of the Twentieth Century (1996, co-edited with Allen J. Scott), Postmetropolis: Critical Studies of Cities and Regions (2000), and Seeking Spatial Justice (2010).

His most recent book, My Los Angeles: From Urban Restructuring to Regional Urbanization (2014), covered more than four decades of urban development in Los Angeles as well as other urban regions. In his introduction, Soja wrote of Los Angeles:

“Its iconic imagery provokes exaggeration, fomenting emotionally excessive repulsion as well as unbridled attraction….Further complicating any understanding of the actual place, Los Angeles for the past century has been a fountainhead of imaginative fantasy, emitting a mesmerizing force that obscures reality by eroding the difference between the real and the imagined, fact and fiction.”

“Ed Soja was respected globally for his innovation in conceptualizing ‘the urban’ and his teaching and mentoring of scholars,” said Lois Takahashi, Interim Dean of the UCLA Luskin School of Public Affairs. “But I will remember him most for his enthusiastic greetings, his incisive humor and his inspiring curiosity. I will miss him terribly.”

During his long and distinguished career as a scholar at UCLA, Dr. Soja also devoted himself to teaching both graduate and undergraduate students and serving as doctoral academic advisor to numerous Ph.D. candidates from the Department of Urban Planning. In addition to courses on regional and international development, he also taught courses in urban political economy and planning theory. He was also a visiting professor at the London School of Economics, in The Cities Program, an international center for architects, engineers, city planners, social scientists, community groups, public servants and leaders in the private sector.

Most recently, Dr. Soja received the Vautrin-Lud International Prize for Geography for 2015. This award, often known as the ‘Nobel Prize of Geography’, was announced during the 26th International Festival of Geography. This prize honors the career of a distinguished geographer whose work has been very influential within and beyond the discipline. Unfortunately, Dr. Soja was unable to be present at the event in Saint-Dié, France and could not deliver the customary plenary lecture. Instead, his work was explored in an effective round table discussion between many of his international peers.

“Ed Soja’s passing is a great loss to the Urban Planning department,” said Anastasia Loukaitou-Sideris, Professor of Urban Planning and Associate Dean of the School of Public Affairs. “He was a giant in the field of social sciences, someone whose work has inspired and will continue to inspire us for generations. His recent award of the Vautrin Lud Prize or ‘Geography’s Nobel Prize’ underlined the enormity of his contributions to our field.”

As his friend and former UCLA graduate student, Costis Hadjimichalis, recently said, “Edward Soja has now gone to his own personal ‘Third Space.’”

A gathering in celebration of his life will be held Monday, January 25 from 4:00PM-6:00PM at the UCLA Faculty Center, Sequoia Room.

The UCLA Luskin School of Public Affairs will establish the Edward Soja Memorial Fellowship in his memory.