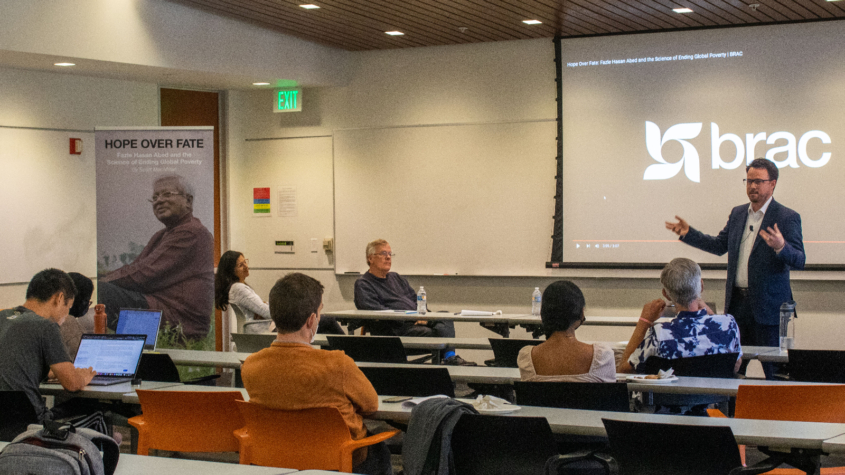 Scott MacMillan, right, shares stories about the life of Fazle Hasan Abed with a UCLA audience. Photo by Mary Braswell

UCLA Luskin hosted a book launch for the biography “Hope Over Fate: Fazle Hasan Abed and the Science of Ending Global Poverty” by Scott MacMillan. The book details the life of Fazle Hasan Abed, founder of the nonprofit grassroots organization BRAC (originally called the Bangladesh Rehabilitation Assistance Committee), which has now grown into one of the world’s largest NGOs, reaching 100 million people in Asia and Africa. MacMillan, his speechwriter, spent a great amount of time working alongside Abed and shared stories at the Oct. 27 book launch, organized by Global Lab for Research in Action and Global Public Affairs at UCLA Luskin. His talk included details about the origins of BRAC and the stories of locals who benefited from the organization. Abed created BRAC in an effort to alleviate poverty in Bangladesh and provide more people with jobs to help sustain themselves. The organization focuses on microfinance, women’s healthcare and social enterprises, as well as providing life skills and livelihood training for girls in countries such as Bangladesh, Tanzania, Uganda, Sudan and Sierra Leone. BRAC stands out from other NGOs because it takes an entrepreneurial approach to tackling poverty, and also because its roots are in Bangladesh, unlike other NGOs that originated outside the Global South. “The road ahead was actually really long, and actually giving people the tools to lift themselves out of poverty involved many other resources. But none of that would mean a thing if people did not first believe in the possibility or change,” MacMillan said. — Aminah Khan

View photos from the book talk

Anheier on Charitable Giving for 2023