Since 2011, the International Practice Pathways (IPP) program has offered a global component to Luskin students’ education prior to the inception of Global Public Affairs. This summer, IPP once again sent a group of students to internship placements around the world, offering them the unique opportunity to see their education come to life on the international scale.

The global journey begins with Shafaq Choudry MURP ’16, who interned in the mayor’s office in Panama City, Panama. Having grown up in Venezuela and worked extensively with Latino communities as a planner, Choudry was immediately drawn to a placement opportunity in Latin America. “The IPP summer program in Panama presented a tremendous opportunity to work at a recently established Department of Urban Planning under the mayor’s office on transportation and land use projects,” she explained.

Her areas of academic interest include sustainable transportation and equitable development, so the opportunity to work in a rapidly developing city was invaluable.

“Panama City has undergone rapid growth and development over the years, and with new leadership in place, the Department of Planning is investing in strategies and tools for inclusive and equitable growth,” said Choudry.

Despite the practical experience she gained, Choudry was most inspired by the people she encountered during her time abroad.

“I met extraordinary, young and talented individuals that are passionate about transforming their city for the better,” said Choudry. “Their open and eager-for-change attitude allowed me to integrate with the team and generate ideas for the future together.”

Choudry will continue her travels this year with a comprehensive thesis project in Mexico City, an endeavor she hopes will lead to a career in Latin America. “Toward the end of my 10-week fellowship in Panama, I received the affirmation I needed in order to pursue international planning work in Latin America as a consultant,” she said.

Like Choudry, Katie Merrill MSW ’16 had deep personal ties to her placement — Europe — having lived and worked in Germany before coming to Luskin. Motivated by this combination of personal and academic interest, Merrill chose to intern at the UN Headquarters in Geneva, Switzerland.

“I have always been interested in the UN and the grand scale of global humanitarian work,” said Merrill. “I was particularly attracted to the idea of working at UNHCR in the wake of the Syrian refugee crisis.”

Merrill was given the freedom to design and run a study on staff alcohol abuse across the Office of the United Nations High Commissioner for Refugees. Many UNHCR staff members work in dangerous areas under highly stressful conditions, leading to a widespread alcohol abuse problem, Merrill explained. “I was shocked and fascinated by what I heard on a daily basis, and I felt a profound responsibility to do them justice,” she said.

“This experience showed me just how intimate research can, in fact, be,” she continued. “I spent hours on the phone with staff members speaking about very jarring personal experiences. It was so powerful to feel that my synthesis and communication of their messages may very well lead to real and important policy changes in the organization, and it was an honor to be at the heart of something so big.”

Merrill and her coworkers interviewed more than 100 staff members over the course of her study, and her findings will be incorporated into a final report to UNHCR.

Away from city life, Jason Karpman MURP ’16 applied his studies in urbanization and environmental impact to the rainforests of Chiang Mai, Thailand. When considering where to apply for his IPP placement, Karpman had his sights set on the research organization World Agroforestry Centre. Between their global office locations, Thailand had the most abundant forest area, covering approximately 37% of the country. “I was drawn to the ecology of the place,” explained Karpman.

IPP offers students the chance to engage in real-life applications of their studies, and this aspect of the program resonated deeply with Karpman. While the majority of his time was spent conducting literature review and research at Chiang Mai University, Karpman was most inspired by field visits to the rainforest itself. He recalled the breathtaking moment when he entered a tropical rainforest for the first time:

“It’s one of those awe-inspiring experiences, and I was humbled by how spectacular [the rainforest] is, how productive it is,” said Karpman. “There was green as far as the eye can see. It solidified that these places provide important environmental services for our planet.”

To future students considering IPP, Karpman recommends the program as the ideal window between the first and second year to reassess the direction of one’s studies.

“[I realized] how to maximize my last year in this program to get the skills and content education I need,” he said. “I can’t overemphasize how important the value of the program is — it’s a moment to pause in your education, reassess things and then get back in the program.” 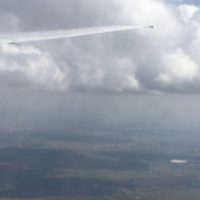 Students Report on Assignments Around the Globe

A Conversation with Mary Robinson: Former President of Ireland on Climate Change
0 replies