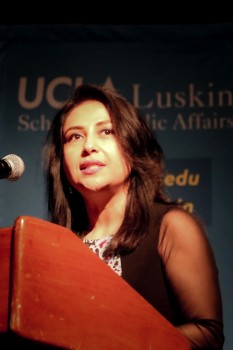 Ananya Roy is Professor of Urban Planning, Social Welfare, and Geography and The Meyer and Renee Luskin Chair in Inequality and Democracy at the University of California, Los Angeles. She is the founding Director of the UCLA Luskin Institute on Inequality and Democracy at UCLA, which advances research and scholarship concerned with displacement and dispossession in Los Angeles and elsewhere in the world. Working in alliance with social movements and community organizations, the Institute seeks to build power and abolish structures of inequality. Previously she was on the faculty at the University of California, Berkeley, where she received her Master’s in City Planning (1994) and Ph.D. in Urban Planning (1999). There she was the recipient of the Distinguished Teaching Award, the highest teaching recognition that the University of California, Berkeley bestows on its faculty.  In 2011, Ananya received the Excellence in Achievement award of the Cal Alumni Association, a lifetime achievement award which recognizes her contributions to the University of California and public sphere.

Ananya is a scholar of global racial capitalism and postcolonial development whose research is concerned with the political economy and politics of dispossession and displacement. With theoretical commitments to postcolonial studies, Black studies, and feminist theory, she seeks to shift conceptual frameworks and methodologies in urban studies to take account of the colonial-racial logics that structure space and place. As a researcher, Ananya strives to advance research justice, by which she means accountability to communities directly impacted by state-organized violence. At the very heart of her work is an insistence on the transformation of the public university – through teaching, public scholarship, and community engagement – so that it can be a force for social justice.

Ananya’s books have focused on urban transformations and land grabs in the global South as well as on global capital and predatory financialization. They include City Requiem, Calcutta: Gender and the Politics of Poverty; Urban Informality: Transnational Perspectives from the Middle East, South, Asia, and Latin America; Worlding Cities: Asian Experiments and the Art of Being Global; Territories of Poverty: Rethinking North and South; and Encountering Poverty: Thinking and Acting in an Unequal World. Ananya is the recipient of several awards including the Paul Davidoff book award, which recognizes scholarship that advances social justice, for Poverty Capital: Microfinance and the Making of Development. Ananya has also played a key role in leading the call for “new geographies of theory,” critiquing the EuroAmerican parochialism of urban studies and demonstrating the capacious concepts that can be generated by thinking from the intellectual traditions of the global South.

Ananya leads a National Science Foundation Research Coordination Network on Housing Justice in Unequal Cities, which creates a field of inquiry into housing justice shared by university-based and movement-based scholars. Along with colleagues at UCLA, Ananya has recently led a Mellon Foundation Sawyer Seminar on Sanctuary Spaces: Reworlding Humanism, which is concerned with the place of racial others in liberal democracy. Situating transnational inquiry and solidarity at the present moment of resurgent white nationalism and xenophobia, her work on sanctuary challenges Western humanism and foregrounds alternative frameworks of freedom and justice. Ananya was Editor of the International Journal of Urban and Regional Research from 2016 to 2020. She is the 2020 Freedom Scholar, an award bestowed by the Marguerite Casey Foundation and Group Health Foundation to social justice leaders.

Her current research is concerned with racial banishment, the expulsion of working-class communities of color from cities through racialized policing and other forms of dispossession. Such work is reflected in her scholarship on property, personhood, and police, which studies policing as a race-making project, as well as in her role as convener of the After Echo Park Lake research collective, which studies displacement in Los Angeles. For Ananya, the horizon of abolition is at stake in such scholarship. This is in turn involves “undoing property,” including the transformation of the policed-propertied order that is the elite university.