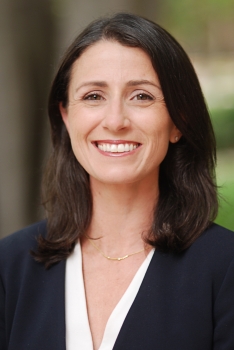 BA in Political Science from Davidson College, Master’s in Social Welfare at UCLA’s Luskin School with a specialization in Gerontology

Courtney Demko’s research focuses on caregiver health and well-being. She is particularly interested in Alzheimer’s caregivers and young adult caregiver burden. Courtney’s dissertation uses national survey data and focuses on the multidimensional factors associated with caregiver burden among young adult caregivers from the millennial population. This research is of particular importance given the increase of the older adult population in the U.S. and will demonstrate to policymakers and program planners the unique needs of an overlooked population.

Courtney has training and experience in both quantitative and qualitative methodologies and has used her research skills on several grant-funded research projects at UCLA. She is a member of the Latino Economic Security (LES) team at UCLA which researches the economic impact of a nation growing older and more diverse. Courtney served as the Project Director for the team’s latest project which included conducting focus groups and surveying older white conservative adults in Orange County, CA looking at their attitudes and beliefs towards immigration and immigration policy. She has published in peer-reviewed journals such as The Journal of the American Society on Aging and book chapters on topics related to aging and diversity.

As part of Courtney’s doctoral training, she has also acquired management and administrative experience as the Assistant Director for the Center for Policy Research on Aging at UCLA’s Department of Social Welfare and Public Policy. Courtney’s expertise includes writing grants for leading foundations.

Courtney also has several years of teaching experience. She has assisted in teaching both master’s and undergraduate courses at UCLA’s Luskin School of Public Affairs Department of Social Welfare. These include classes in Social Work Research Methods, Social Work Policy and Diversity and Aging. She’s also served as a Guest Lecturer at UCLA’s Department of Social Welfare including topics on Caregiving and Public Policy. Prior to entering the doctoral program, Courtney acquired training leading support groups and providing one-on-one counseling with homeless women at the Downtown Women’s Center on Skid Row in Los Angeles. She also gained experience providing care consultations and co-facilitating support groups for early-stage Alzheimer’s patients and their family caregivers at the Alzheimer’s Association in Los Angeles.

Courtney earned her B.A. in Political Science from Davidson College (2005), and an M.S.W from UCLA’s Luskin School of Public Affairs, Department of Social Welfare with a specialization in Gerontology (2013).

The Politics of Aging in a Majority-Minority Nation and Later-Life Social Support and Service Provision in Diverse and Vulnerable Populations.