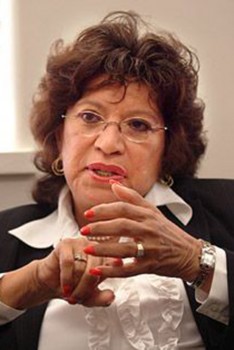 Professor Becerra’s research focuses on policy issues in health and mental health over the life span, with particular emphasis in social gerontology and child welfare. She is the principal investigator for a State of California Department of Social Services five-year study of welfare reform in California. She also is working on an National Institute of Health/National Institute on Aging four-year panel study of the Mexican American elderly entitled, “Health Care Use and Social Support.” She served as the keynote speaker at a symposium on the urban elderly sponsored by the 1995 White House Conference on Aging.

In her latest book, Social Services and the Ethnic Community, Dr. Becerra documents the relationship between the social work profession and ethnic communities, showing why and how ethnic minority agencies have played a pivotal role in their communities by filling the gaps left by mainstream social service agencies.

In addition to her research and publications, Dr. Becerra has worked as a child therapist, a drug counselor,a psychiatric social worker and a probation officer. Professor Becerra also holds an MBA from Pepperdine and has served on the boards of several social service groups, most recently acting as chair of strategic planning for the YWCA of Greater Los Angeles. She also has advised a wide variety of government agencies and non-profit organizations, including the NIH,
the U.S. General Accounting Office, the U. S. Commission on Civil Rights, the American Association of Retired People and the American Cancer Society.

In 2002, Professor Becerra was named Associate Vice Chancellor of Faculty Diversity.  She began the new post on July 1, 2002.