A Voice from the ‘Eye of the Storm’ 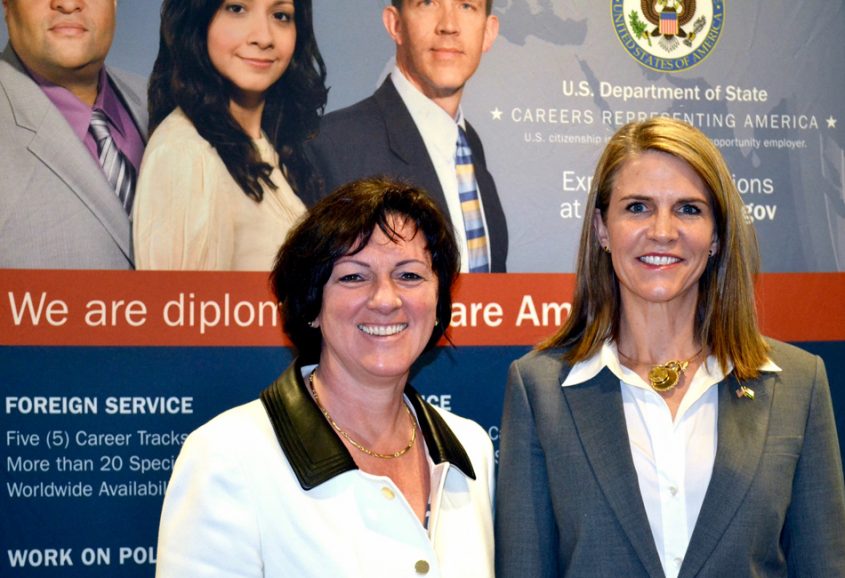 A Voice from the ‘Eye of the Storm’ U.S., Hungarian diplomatic counterparts meet, share global perspectives at Luskin School

If there is one thing that Hungary’s Ambassador to the United States would like Americans to know about her country, it’s “that we are friends of America.”

Ambassador Réka Szemerkényi met with her American counterpart, U.S. Ambassador to Hungary Coleen Bell, Feb. 26, 2016, at the UCLA Luskin School of Public Affairs to share perspectives on the two countries’ ongoing relationship in light of recent events in Europe and the Middle East. The event was presented by the UCLA Luskin Senior Fellows Leadership Program and the U.S. Department of State, represented by Melissa Martinez, U.S. State Department Diplomat in Residence and Luskin Senior Fellow.

While perhaps better known in popular memory in this country from the Cold War era, Hungary — a member of the European Union (EU) and NATO — currently finds itself not only physically but politically at the center of a turbulent Europe, from the Syrian refugee crisis to relations with an emboldened Russia in the Crimea region of Ukraine and elsewhere.

“Hungary is in the eye of the storm,” said Szemerkényi, who said she was brought up on Radio Free Europe, behind the pre-1990s Iron Curtain era. “If it is better understood, it can just help.” She pointed out that, while Hungary’s second-largest trading partner after the European Union is the United States, the country derives 80 percent of its energy needs through Russia.

Both ambassadors agreed that despite tensions and a “complex” situation, peace and stability in the region is in the best interests of both countries, longtime partners in trade with a long tradition of cooperation. And, like Szemerkényi, Ambassador Bell, who was appointed by President Obama in 2014, has witnessed the refugee crisis on the ground in central Europe.

“The situation became untenable,” said Bell describing the hundreds of thousands of refugees pouring over the borders of Hungary and EU countries. She said that the media “got some of this right and some of it very wrong,” referring to the Syrian refugees. Szemerkényi said that the situation was much more “nuanced” than the media story that was coming out of the region. Putting the surge of refugees into the EU into perspective, she said that the many thousands of refugees (not all from Syria) would be the equivalent of millions entering the United States in a 12-month period.

And, while the Hungarian government set up refugee centers, Szemerkényi said that refugees did not necessarily want to stay in Hungary but move on to bordering countries such as Austria, which she described as unprepared for the influx, or Germany, where refugees believe there are more opportunities.

“The entire length of the border was used as a permanent border crossing,” said Szemerkényi, while discussing a controversial fence across the border and the challenge — or impossibility — of conducting registration of hundreds of thousands of people, none of whom had passports. “There is no way to distinguish between refugees and migrants” coming from places such as Kosovo to Pakistan, she added, making passport-free travel — critically important to trade in the EU — problematic for Hungary’s commitments to its own national security.

Despite tensions brought about by the situation in Europe, Bell said that the two countries will continue to have a strong relationship while “we try to figure out how to express our concerns.”

Szemerkényi said that in addition to expressing the long-term friendship of the two countries, she would also like to dispel any misconceptions about Americans in her country.

“You are important — we need you as allies.”

A Road Map for Advancing Women in Tech
Scroll to top